Iran will “definitely” respond to a recent attack on an Iranian ship in the Red Sea, a spokesman for the Islamic Republic’s military said Thursday.

Brig. Gen. Abolfazl Shekarchi told Russian news agency Sputnik that Iran was investigating Tuesday’s attack on the Saviz and would not retaliate until the competition of the probe.

“If we uncover the source of the attack on the ship, we will definitely respond, we will never be silent,” he said.

Shekarchi also said Iran suspected Israel and the US were linked to the attack.

The Saviz, which was reportedly hit by a limpet mine, has allegedly been used for years by Iran’s Islamic Revolutionary Guard Corps as a command-and-control center for its operations in the region.

A US official told The New York Times on Tuesday that Israeli forces carried out the attack.

The anonymous US official said Israel called the strike a retaliation for several attacks on Israeli-owned shipping vessels in recent weeks, and that the ship had been hit below the water line.

The IRGC blamed Israel for the attack on social media while Iran’s Foreign Ministry merely said the vessel had been damaged in an “explosion.”

Israeli officials have refused to comment on the matter, in line with a longstanding policy of ambiguity regarding its military actions against Iran in the region, save for those that are direct, immediate retaliations for attacks on Israel.

Defense Minister Benny Gantz refrained Wednesday from discussing the alleged Israeli attack, but said generally that the military would take action anywhere it determines it needs to.

“The State of Israel must defend itself. Every place we find an operational challenge or operational need, we will continue to act,” he said. 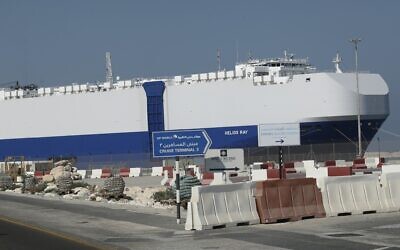 In recent months, reports have indicated the Israel-Iran conflict was increasingly being waged at sea, marking a change in the conflict that previously took place primarily via airstrikes, cyberattacks, alleged espionage activities and on land.

Tensions have heated in the Middle East in recent months, as Iran repeatedly violated the terms of its 2015 nuclear deal with world powers ahead of talks with the Biden administration.