TEHRAN, Iran — An opinion piece published by a hardline Iranian newspaper on Sunday suggested Iran should attack the Israeli port city of Haifa if Israel was responsible for the killing of the scientist who allegedly masterminded its military nuclear program.

Though the Kayhan newspaper has long argued for aggressive retaliation for operations targeting Iran, Sunday’s opinion piece went further, suggesting any assault be carried out in a way that destroys facilities and “also causes heavy human casualties.”

Mohsen Fakhrizadeh, the scientist said by Israel and the US to head Iran’s rogue nuclear weapons program, was assassinated Friday in an ambush near the capital Tehran, Iran’s defense ministry said. The ministry confirmed the death of Fakhrizadeh, a professor of physics and an officer in the Iranian Revolutionary Guard Corps, after it was widely reported in Iranian media.

Several top Iranian officials indicated they believed Israel was behind the killing in the hours after the attack, with one adviser to the Islamic Republic’s supreme leader vowing revenge. Israel had no comment on the attack, and Israeli TV reports late Friday said the army had not been placed on a heightened alert in its wake.

Striking Haifa and killing a large number of people “will definitely lead to deterrence, because the United States and the Israeli regime and its agents are by no means ready to take part in a war and a military confrontation,” Zarei wrote. He said an assault on Haifa needed to be greater than Iran’s ballistic missile attack against American troops in Iraq following the US drone strike that killed top Iranian general Qassem Soleimani in January.

Haifa, on the Mediterranean Sea, has been threatened in the past by both Iran and one of its proxies, the Lebanese terrorist group Hezbollah. Hezbollah leader Hassan Nasrallah recently suggested striking Haifa’s stores of ammonium nitrate, a highly explosive fertilizer that fueled the deadly Beirut port blast in August that killed 193 people and wounded 6,500 others.

While Kayhan is a small circulation newspaper in Iran, its editor-in-chief Hossein Shariatmadari was appointed by Supreme Leader Ayatollah Ali Khamenei and has been described as an adviser to him in the past.

The Iranian parliament on Sunday held a closed-door hearing about Fakhrizadeh’s killing. Afterward, parliament speaker Mohammad Baqer Ghalibaf said Iran’s enemies must be made to regret killing him.

“The criminal enemy does not regret it except with a strong reaction,” he said in a broadcast on Iranian state radio. 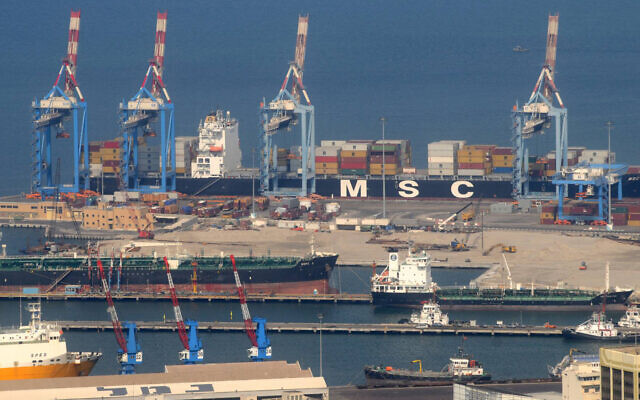 State television broadcast images of Fakhrizadeh’s casket being flown to Mashhad, a holy Shiite city in Iran’s east home to the shrine of Imam Reza.

Analysts have compared Fakhrizadeh to being on par with Robert Oppenheimer, the scientist who led America’s Manhattan Project in World War II that created the atom bomb.

Israel has long been suspected of carrying out a series of targeted killings of Iranian nuclear scientists nearly a decade ago, in a bid to curtail Iran’s nuclear program. It has made no official comment on the matter. Israeli TV coverage noted that Friday’s attack was far more complex than any of those previous incidents.