Iran’s Supreme Leader Ayatollah Ali Khamenei on Sunday slammed as a “big mistake” remarks by his foreign minister, a week after audio emerged of the latter bemoaning the military’s influence on diplomacy.

Top diplomat Mohammad Javad Zarif, a relative moderate, made the remarks in a three-hour “private” conversation first published by media outlets outside the country a week ago, provoking anger from conservatives.

“The country’s policies are made of different economic, military, social, scientific, and cultural plans, including foreign relations and diplomacy,” Khamenei said in televised remarks.

Saying “that one part denies the other or contradicts… is a big mistake that must not be perpetrated by officials of the Islamic Republic,” the supreme leader added.

The recording — described as “stolen” by Iran’s government — has triggered a heated debate ahead of presidential elections and amid talks in Vienna aimed at reviving a 2015 nuclear deal between Iran and world powers.

Khamenei did not explicitly cite the leaked audio or Zarif’s name, but the comments, in the last few minutes of an hour-long speech, were clearly targeted at the foreign minister.

The supreme leader also emphasized that “nowhere in the world is foreign policy devised by the foreign ministry.”

The diplomatic apparatus is only “the executor” of decisions made at higher levels, he said.

In the audiotape, Zarif also mentioned the significant role played by Major General Qassem Soleimani, the commander of the Revolutionary Guards’ foreign operations arm, who was killed in a US airstrike in Iraq last year. 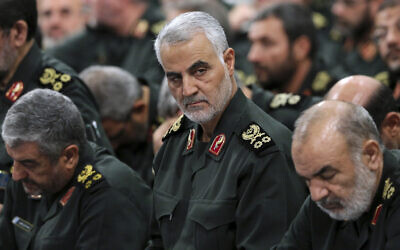 Khamenei said Sunday, “Some of these remarks are a repeat of hostile remarks of our enemies, repeating America’s rhetoric.”

“There is the Supreme National Security Council. All the officials are present (there). Decisions are made and the foreign ministry must execute and advance them through its own means.”

In response to the supreme leader’s speech, Zarif affirmed that he believes Iran’s foreign policy should be directed by its leadership and represent the national consensus.

Zarif had earlier on Sunday asked for forgiveness from Soleimani’s family.

“My remarks… do not diminish the status and irreplaceable role of martyr Soleimani,” Zarif wrote on Instagram.

“If I knew a word of… (my remarks) would be published publicly I would not have said them,” the foreign minister said.

“I have forgiven all those I believe accused me… I hope the great people of Iran, all those who love (Soleimani), and especially the gracious Soleimani family, forgive me as well,” he added.