The match was censored over “100 times,” according to My Stealthy Freedom, an Iranian rights group that opposes Iran’s compulsory hijab law.

During the Premier League match between Tottenham and Manchester United on Sunday, an Iranian state channel cut away from the game and played footage of the Tottenham Hotspur Stadium and the backstreets of North London in an effort to conceal shots of assistant referee Sian Massey-Ellis, who was wearing shorts.

At the end of the game, a commentator reportedly quipped that “he hoped the viewers enjoyed the geographic show,” according to My Stealthy Freedom.

Iranian state TV channel cut away from live coverage of Tottenham versus Manchester United more than A HUNDRED times ‘to avoid showing the bare legs of the female assistant referee’.#PL #seanknows pic.twitter.com/L0MN8mRLAk

“Censorship is in the DNA of the Islamic Republic of Iran. We should not normalize this practice. This is not our culture. This is the ideology of a repressive regime,” the rights organization said in a statement on Facebook.

In this file photo taken on February 7, 2018, Iranian women wearing hijabs walk down a street in the capital Tehran. (Atta Kenare/AFP)

Since the Islamic Revolution of 1979, it became mandatory for women to wear a hijab and modest clothing in public, a move enforced by the Islamic religious police of Iran, known as Guidance Patrol.

Local programs must normally abide by strict rules in which no female hair can be shown, even in historical dramas or scenes set in a family home where real-life women do not cover their heads.

Iranian TV shows foreign films with unscarved women — although too much leg or cleavage gets blurred out or otherwise hidden. 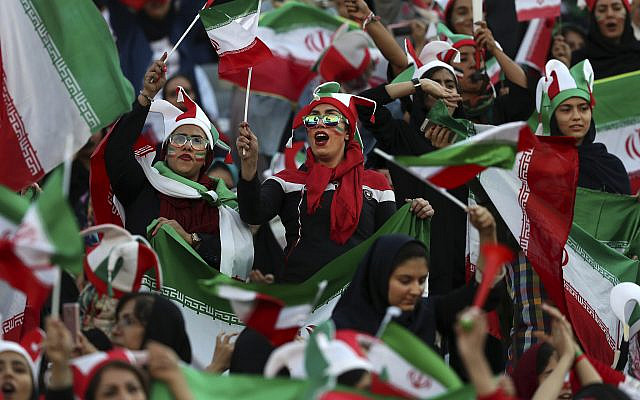 Iranian women cheer during a soccer match between their national team and Cambodia in the 2022 World Cup qualifier at the Azadi (Freedom) Stadium in Tehran, Iran, October 10, 2019. (AP Photo/Vahid Salemi)

Iran also has a contentious history with its female soccer fans.

In 2019, Iranian women were allowed into a Tehran stadium for the first time in decades to watch the 2022 World Cup qualifier between the Iranian national team and Cambodia at Tehran’s Azadi Stadium. This event marked a decades-long push by Iranian women to be able to watch matches, something hardliners in Iran’s Shiite theocracy still oppose.

Iran allocated 4,000 tickets for women in a stadium that seats about 80,000 people, keeping them separated from men and under the protection of female police officers. That’s even though face-painted Iranian women have cheered for their team abroad for years despite the 1981 ban that followed the country’s Islamic Revolution.