The Islamic State claimed responsibility for Thursday’s deadly suicide attack in Kabul, as the United States vowed a response to the attacks which killed at least 12 service members.

The head of US Central Command vowed retaliation for the deadly attacks he blamed on “two suicide bombers assessed to have been ISIS fighters,” and said the military will “go after” the perpetrators of the attacks if they can be found.

“We are working very hard right now to determine attribution, to determine who is associated with this cowardly attack, and we’re prepared to take action against them,” General Kenneth McKenzie said.

He added that US forces were “prepared and ready to defend against” possible further IS attacks.

IS named one of the attackers as “Abdul Rahman al Loghari,” from Afghanistan’s Logar province. The terror group claimed he reached within 5 meters of US forces before detonating his explosives.

In a message shared on its Amaq News Agency, the group claimed the blast killed and wounded some 160, and included a photo of al Loghari.

The statement only appeared to mention one bomber and a single explosion. At least two bombs were believed to have detonated during Thursday’s attack at the airport.

#Afghanistan: The Islamic State has claimed one of the two suicide bombings in Kabul today, naming the attacker as “Abdul Rahman al Loghari”.

The US airlift in Kabul will continue despite the attack on the airport.

“We continue to execute our number one mission, which is to get as many evacuees and citizens out of Afghanistan,” McKenzie said.

“ISIS will not deter us from accomplishing the mission,” he added.

US Secretary of Defense Lloyd Austin tweeted his “deepest condolences” to the loved ones of the US soldiers killed in the Kabul blasts, but indicated that the attacks would not change the withdrawal plans.

Secretary of Defense Lloyd Austin listens to a question during a media briefing at the Pentagon, August 18, 2021, in Washington. (AP/Alex Brandon)

“Terrorists took their lives at the very moment these troops were trying to save the lives of others,” he said in a statement.

“But we will not be dissuaded from the task at hand,” he said. “To do anything less — especially now — would dishonor the purpose and sacrifice these men and women have rendered our country and the people of Afghanistan.” 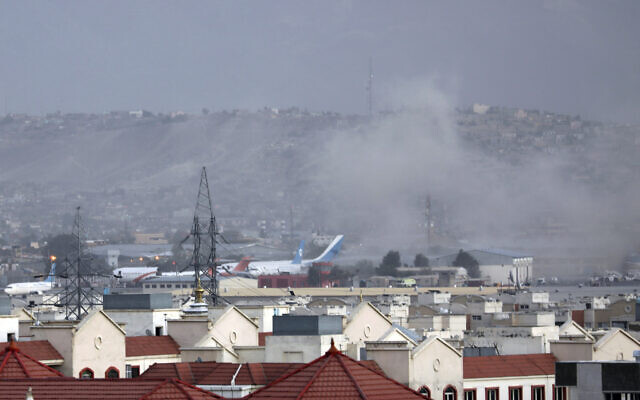 Smoke rises from an explosion outside the airport in Kabul, Afghanistan, August 26, 2021. (AP Photo/Wali Sabawoon)

An Afghan official said at least 60 Afghans were killed and another 143 were wounded in the attacks outside Kabul airport. The official spoke on condition of anonymity because he was not authorized to brief media.

Twelve US servicemen were killed and 15 wounded in the attacks, McKenzie said.

The US airlift is scheduled to end on August 31 with a complete withdrawal of US troops from Afghanistan.