In a rare primetime address in Hebrew, Ra’am party chairman Mansour Abbas called for Arab-Jewish cooperation in Israel, in a pitch to Jewish parties not to boycott his conservative Islamist party from joining the next government.

During his speech, which was carried live by all of Israel’s major television networks, Abbas did not endorse either Prime Minister Benjamin Netanyahu or Yesh Atid leader Yair Lapid as the next premier, following last week’s inconclusive election that resulted in his four-seat party earning possible kingmaker status. He also declined to associate his party with either political bloc.

But the Islamist politician stressed that he was willing to work with all Jewish political parties, left and right, breaking with decades of Arab Israeli political tradition that shunned close cooperation with the Israeli government over the conflict with the Palestinians.

“That which unites us all is greater than what divides us,” Abbas said in a speech in Nazareth.

In his speech, the Islamist politician defined himself as a Muslim and an Arab, but also an Israeli citizen.

“My name is Mansour Abbas, a proud Muslim and Arab, and a citizen of the state of Israel. I am the leader of the largest and most senior movement in Arab society,” said Abbas, referencing the Islamic Movement in Israel, with which Ra’am is associated.

His speech was brief, lasting only around seven minutes. But it was highly anticipated and closely watched by Israelis on live television — a nearly unprecedented moment for an Israeli Arab politician.

Since Israel’s March 23 elections saw neither center-left nor right-wing parties able to easily form a government, Abbas has been wooed by both left-wing and right-wing parties eager for his vote, which could tip the scales in their favor.

In his speech on Thursday night, Abbas took no stance on which candidate he would recommend for prime minister. But he urged Israeli politicians to extend an olive branch to his faction, intimating that a new reality had been created in Israeli politics — one in which Arab Israelis could play an active role in decision-making. 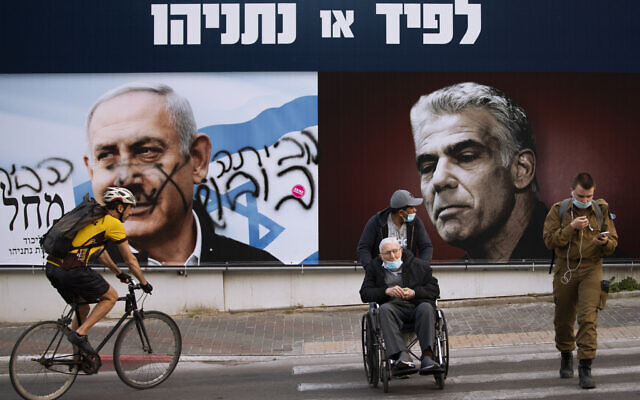 “Reality is changing, and we are refusing to recognize that. Israel has changed its face, but she refuses to open her eyes,” Abbas said, referencing a famous Hebrew-language song.

Arab parties have only been an unofficial part of a coalition once, in the 1990s, to help pass the Oslo Accords with the Palestinians. They supported Itzhak Rabin’s government and voted with it, but were not officially part of the coalition and their members did not serve in ministereal roles.

But Israel’s ongoing political deadlock, in its second year, could force collaborations that were unthinkable until not long ago.

“Now is the time for change,” Abbas said. 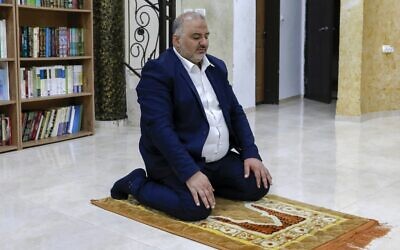 Mansour Abbas, head of the Islamist Ra’am party, prays in the northern town of Maghar on March 26, 2021. (Ahmad Gharabli/AFP)

Abbas, 46, has become a familiar face for many Jewish Israelis in recent months — a rarity for an Arab politician — due to his willingness to deal with right-wing Prime Minister Netanyahu. He has yet to announce whether he will back Netanyahu or the premier’s rivals to form the next government, saying only that he’ll ally with the bloc that better supports his policies benefiting Arab Israelis.

Abbas’s willingness to pursue a détente with the right-wing led to the breakup of the Joint List, a coalition of mostly-Arab parties. The three remaining parties ran against Abbas in the most recent elections. Defying expectations, Abbas managed to pass the election threshold to become Israeli politics’ most unlikely potential kingmaker.

The Islamist MK also repeated his message from this year’s campaign: His party should not be taken for granted by either the left or the right.

“I don’t want to be part of any [political] bloc — right or left. I am here in a different bloc — the bloc that voted for me to serve my people and gave me a mandate to ensure that that the needs of the Arab public, that for years were unmet demands, are turned into a genuine work plan and realized,” Abbas said on Thursday night. 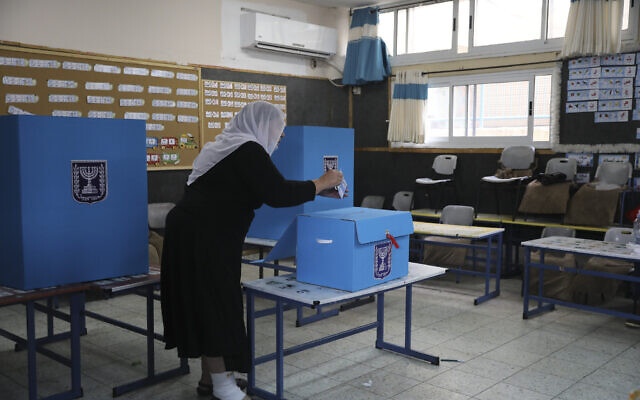 An Arab Israeli woman votes in the Knesset election at a polling station in Maghar, March 23, 2021. (AP Photo/Mahmoud Illean)

Notably absent from Abbas’s speech was any direct reference to the Palestinian cause by name. The Islamist lawmaker did, however, reference Arab Israelis’ inability to realize “collective rights.”‘ He also repeatedly emphasized the importance of understanding the narratives of each other.

“I extend my hand to create an opportunity for coexistence in this land, which is holy to the three monotheistic religions and both nations,” he declared.

Abbas claimed his party sought to “respect every person for his humanity” and emphasized the common destiny of Arabs and Jews in the state of Israel.

“If the road in Wadi Ara is problematic, it won’t distinguish between Arab and Jewish passersby,” Abbas said. “If there’s a bed lacking in Soroka Hospital, it can harm both those in Beersheba and in Rahat.”

“My bloc gave me the mandate to transform the demands of the Arab community from what they were for years — mere demands — into a viable, workable plan,” Abbas said. 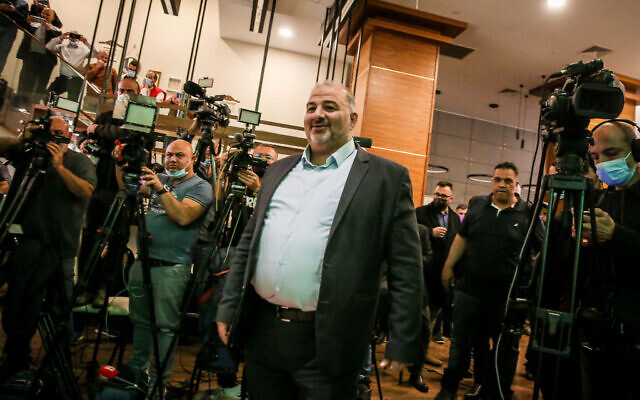 Abbas slammed violence against “any person due to their political views or religious or ethnic identity,” adding: “We have committed to sanctifying life and despising violence.”

“If we don’t manage to eliminate ignorance and eradicate racism, we will bequeath an impossible, dangerous, and complex reality to the next generation,” Abbas concluded.

Abbas’s movement is the political wing of Israel’s Southern Islamic Movement; like Hamas, it is modeled off the Muslim Brotherhood. Abbas has in the past praised aspects of Hamas’s 2017 charter, although he also criticized the document for not ending the targeting of Israeli civilians by the terrorist group. 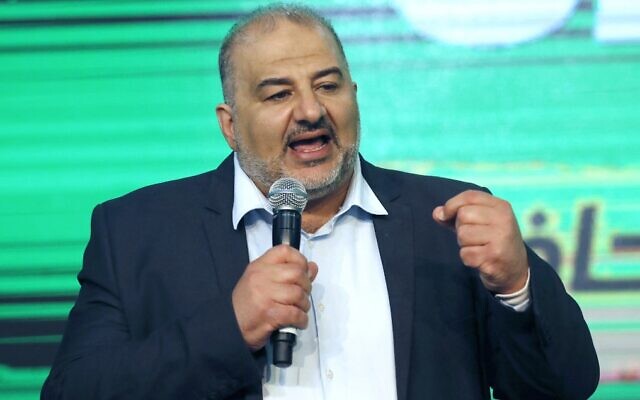 Ra’am leader Mansour Abbas at the Islamist party’s campaign headquarters in the northern city of Tamra on March 23, 2021. (Ahmad Gharabli/AFP)

While Abbas has enjoyed warmer relations with Netanyahu, his party has deep concerns about some of his allies, such as Itamar Ben-Gvir from the far-right Religious Zionism party.

Ben-Gvir was quick to respond to Abbas’s speech, accusing him of playing “cute teddy bear” while still maintaining anti-Israel views.

“Those who belong to the Islamic Movement support Hamas and sanctify baby killers. A coalition that leans on Abbas will be the end of the right and we have no mandate to do so,” Ben-Gvir said.