The Israel Prisons Service (IPS) announced Monday that it would not allow Khalida Jarrar, a jailed senior member of the Popular Front for the Liberation of Palestine (PFLP) terror group, to attend the funeral of her 31-year-old daughter, who died of a heart attack a day earlier.

According to the Haaretz daily, Israeli lawmakers Aida Touma-Sliman and Osama Saadi from the predominantly Arab Joint List party had asked Public Security Minister Omer Barlev to intervene on the matter and there had been pressure from Palestinians and activists, but the IPS decided not to temporarily release Jarrar.

In a letter to Barlev, a representative of the IPS said that Jarrar, jailed for membership in a terror organization, was a security prisoner, and therefore it was not within their authority to release her for the funeral.

“The prisoner is classified as a security prisoner,” the letter read. “Therefore, her request does not meet the threshold conditions that allow this consideration and as a result, it is not within the authority of officials, including the [prisons] commissioner, to grant this request.”

The letter noted that instead, Jarrar would be permitted to have a phone call.

Saadi responded that the situation was a “shame and a disgrace.”

“When you are a Palestinian political prisoner, then the ‘enlightened’ occupation prohibits the basic right to mourn and accompany your daughter on her final journey,” Saadi said, according to Haaretz. “A shame and disgrace — on the matter of political prisoners, there is no difference between [Prime Minister Naftali] Bennett and [Foreign Minister Yair] Lapid’s government and that of [predecessor Benjamin] Netanyahu.”

The funeral was set to take place on Tuesday morning — Jarrar’s family had been waiting to see if a furlough would be granted before carrying out the burial.

According to Human Rights Watch, Suha Jarrar was also an activist, working for Palestinian human rights organization al-Haq where she carried out research on the environmental impact of Israeli policies in the West Bank as well as on gender issues.

Khalida Jarrar was sentenced in March to two years in prison after being held in an Israeli jail for more than a year without charges.

“The Judea Military Court convicted Khalida Jarrar, by her own confession, of the offense of holding office in the Popular Front for the Liberation of Palestine from 2016 until her arrest in 2019,” the army said in a statement at the time.

Jarrar had been arrested along with dozens of other PFLP members in October 2019 after a terror attack by the organization killed Rina Shnerb, a 17-year-old Israeli girl, close to the West Bank settlement of Dolev. 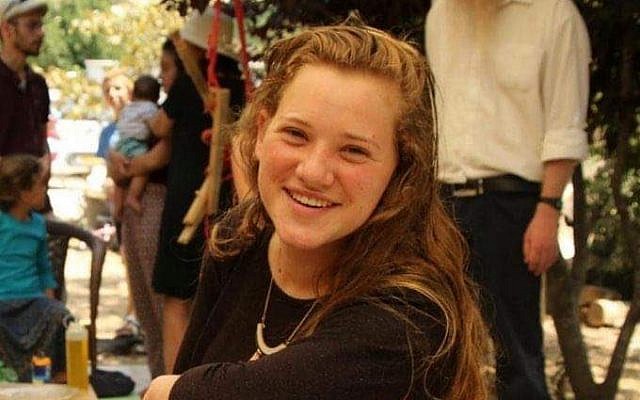 The attack had allegedly been planned and carried out by several members of the PFLP, who were later arrested by Israeli forces. In a wave of mass arrests following the murder, Israel detained dozens of PFLP activists, including Jarrar.

Military prosecutors said that not enough evidence had been found to convict Jarrar of her involvement in the PFLP’s armed activities.

Jarrar received two years in jail as part of a plea bargain. As she was first detained over a year prior to the sentencing, however, she is only serving about eight months and is set for release around October. She was also told to pay a NIS 4,000 ($1,210) fine.

Israel, the United States, and the European Union consider the PFLP, one of several member parties of the Palestine Liberation Organization, to be a terrorist organization.

The PFLP’s armed wing, the Abu Ali Mustapha Brigades, carried out suicide bombings against Israeli soldiers and civilians during the Second Intifada, and has continued to sporadically attack Israelis since.

Jarrar was elected in 2006 to the Palestinian legislature as a PFLP representative. She has long been a well-known PFLP politician, focusing on women’s rights and the affairs of prisoners in Israeli jails. 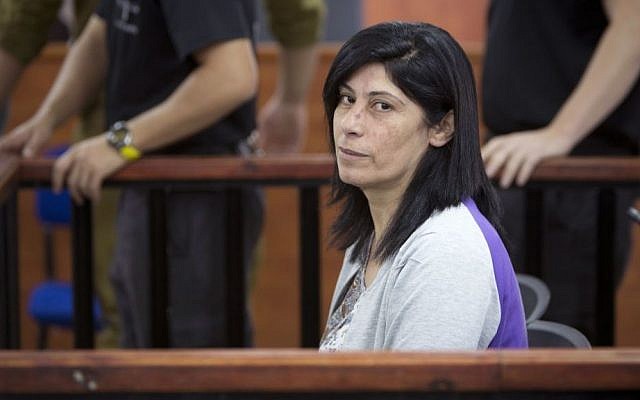 Senior Popular Front for the Liberation of Palestine (PFLP) member Khalida Jarrar, sitting at the Ofer Military Court near Ramallah on May 21, 2015. (AP/Majdi Mohammed)

Before her plea bargain, Jarrar had been held for over a year without trial in Israeli prison under a rule known as administrative detention. The procedure, which is primarily used with Palestinians, enables Israeli security forces to detain suspects for months at a time without issuing an indictment.

Israeli security officials have defended the measure, arguing that issuing an indictment could force them to reveal sensitive security information. Palestinians and international rights groups, however, have criticized it, contending that Israel abuses it. 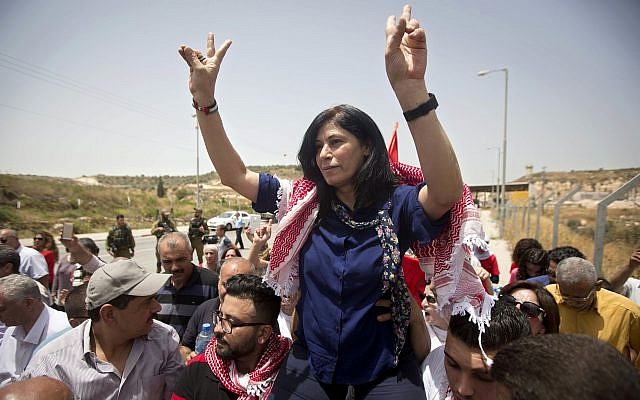 She has spent several periods in Israeli jail, some in administrative detention. Jarrar did a stint in prison in 2015 and 2016 after an Israeli military court convicted her of incitement to violence and “promoting terror activities.” She has denied those charges.

The parliamentarian also spent 19 months in Israeli prison between 2017 and 2019, when she was accused of “involvement with terrorist activities and violent public disturbances,” but was never formally charged.