The Israel Defense Forces overnight Saturday-Sunday carried out another round of retaliatory airstrikes in the Gaza Strip, following two rocket attacks on southern Israel in less than 24 hours.

The raids hit a target in central Gaza, according to Palestinian media reports. There were no immediate reports of injuries or damage.

Earlier Saturday night, Palestinian terrorists in the Gaza Strip fired a rocket at southern Israel, raising the specter of renewed conflict. The rocket was intercepted by the Iron Dome missile defense system. The attack triggered sirens in the town of Sderot and surrounding communities in southern Israel.

A 29-year-old man sustained a light head wound after he fell while running to a bomb shelter. He was taken to Ashkelon’s Barzilai Medical Center for treatment, medics said.

Shortly after 11 p.m. on Friday, Palestinian terrorists in the Gaza Strip fired a single rocket towards Israel that was intercepted by the Iron Dome system, the army said. The rocket triggered warning sirens in the Eshkol region and local residents reported hearing several explosions. There were no reports of injuries or damage.

In response to the rocket fire on Friday night, the IDF carried out strikes on terror targets in the Gaza Strip in the early hours of Saturday morning, the military said.

The IDF said that it struck a Hamas position used to carry out machine gun fire, and a storage site located near a school and mosques. There were no further details given on what the IDF believed was stored at the facility.

The IDF also said that it hit a compound used to produce the concrete used to build the terror group’s underground tunnel network, which is said to be located near cultural sites. There were no immediate reports of injuries.

In the statement, the IDF reiterated that it holds Hamas responsible for all terror activities in the enclave.

The Palestinian Red Crescent reported that it treated eight people suffering from injuries from rubber bullets and another 15 cases of tear gas inhalation during clashes at Hawara checkpoint, south of Nablus.

The Saturday night rocket fire came soon after Israel captured two more Islamic Jihad security prisoners who escaped from a high-security prison on Monday, after arresting two others the day before.

This also comes a day after Qatar’s envoy to Gaza said that efforts to send aid from his country to the Gaza Strip, including to employees of the Hamas government, had failed after the Palestinian Authority backed out of the deal.

The rocket was likely fired by the Palestinian Islamic Jihad, coming just after Israel announced it had caught two Islamic Jihad fugitives who broke out of the Gilboa prison on Monday along with four other security prisoners. 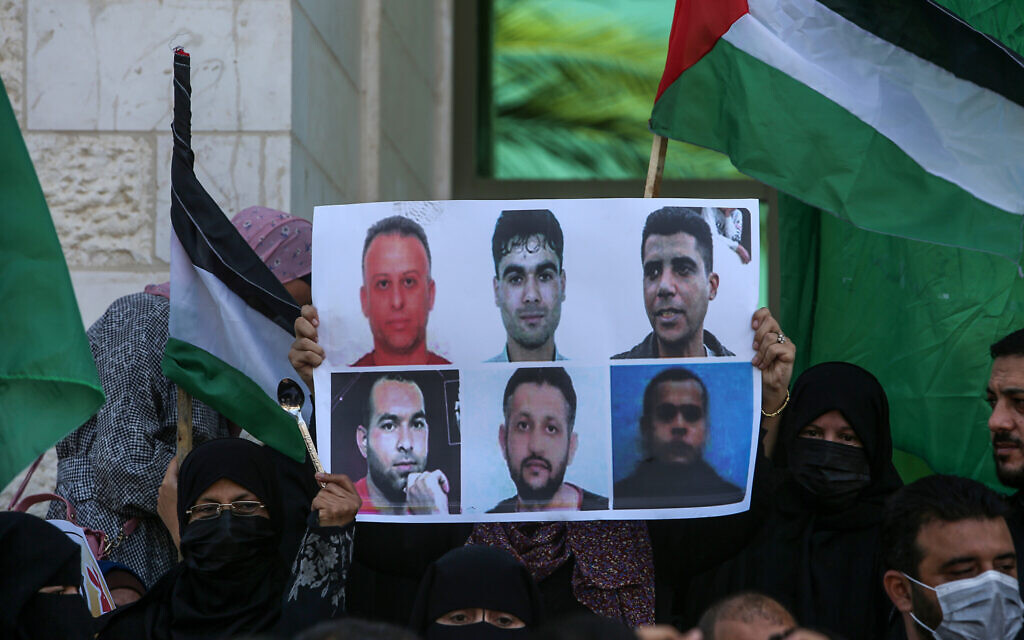 Palestinians attends a rally in solidarity to the escape of the six Palestinian prisoners from the Israeli prison of Gilboa, on September 8, 2021, in Khan Yunis in the southern Gaza Strip. (Abed Rahim Khatib/Flash90)

Qatari envoy Mohammed al-Emadi said that the deal was off because a mechanism agreed earlier in the week where Palestinian Authority banks would transfer the money to Hamas employees was no longer an option.

He said that the banks had refused to take part, fearing they could be targeted by sanctions for transferring money to a terror group.

The issue of the civil servants had been a sticking point in setting up a mechanism to transfer the money. On Monday, al-Emadi said that the issue had been resolved “following an agreement by the different parties.”

The report said that Israel wanted to deal with Hamas on its own terms and at a time of its choosing, and not be drawn into a conflict that would suit the terror group.

Israel, which still allows many goods into the Strip, views the blockade as a necessary measure to keep terror groups from being able to freely arm themselves and present a much greater threat.

Emanuel Fabian, Times of Israel staff and Agencies contributed to this report.