Israel and the European Union reached an agreement on Wednesday to mutually recognize vaccine certificates, the Foreign Ministry announced, in a move that will allow travelers access to Green Pass programs.

The ministry said work on the agreement would be completed in early October and would give vaccinated Israeli tourists and business people access to the EU Green Pass, allowing entrance to “restaurants, cultural centers, public institutions and more.”

It would also allow Israel to gear up to begin accepting tourists from Europe, the statement said. Furthermore, it will allow Israelis access to other countries’ programs, should they join the initiative in the future.

Foreign Minister Yair Lapid hailed the agreement as “an important step in laying the groundwork for a return to normal with regard to flight and tourism ties between Israel and the EU.”

“I congratulate the teams at the Foreign Ministry, the Ministry of Health and the Israeli Embassy to the European Union in Brussels for this important achievement,” he said.

Health Minister Nitzan Horowitz called it “a big step forward in our effort to ease the situation for the public and allow a routine life alongside the coronavirus.”

However, the ministry cautioned that the program did not supersede entry requirements of individual EU nations, like Portugal, which currently bars Israeli tourists. It also allows Israel to continue to bar entry to travelers from specific EU countries if it chooses.

In this Monday, May 17, 2021 file photo, a passenger of a flight arriving at Faro leaves the airport, outside Faro, in Portugal’s southern Algarve region. (AP Photo/Ana Brigida, File)

Israeli travel to Europe has plummeted in recent weeks after the EU removed Israel from a list of nations deemed “epidemiologically safe,” and Portugal and Sweden responded by slapping entry bans on Israelis.

Travel agents said many Israelis responded by canceling plans to travel, including to other EU nations, fearing that fresh restrictions could be imposed, disrupting travel.

Two other countries, France and Switzerland, have decided to bar non-vaccinated Israelis. Travelers from Israel and the US who are not inoculated against the coronavirus are now only permitted entry to France if they can prove an essential reason for making the trip and can present a negative test before traveling.

And they will need to quarantine for seven days upon arrival.

Switzerland said that as of Monday, Israel will be added to its list of “coronavirus risk countries” and unvaccinated Israelis can only enter the country in a case of “utmost necessity.” Vaccinated Israelis will still be granted entry.

Holland is demanding that all Israelis arriving quarantine, which makes it an impractical destination for most leisure travelers.

“We were expecting to see lots of travel to Europe over the chagim season, but it’s been stopped dead in its tracks,” Mark Feldman, CEO of Ziontours, a large Jerusalem travel agency, told The Times of Israel, explaining that fear of broadening bans is affecting people more than the existing bans. 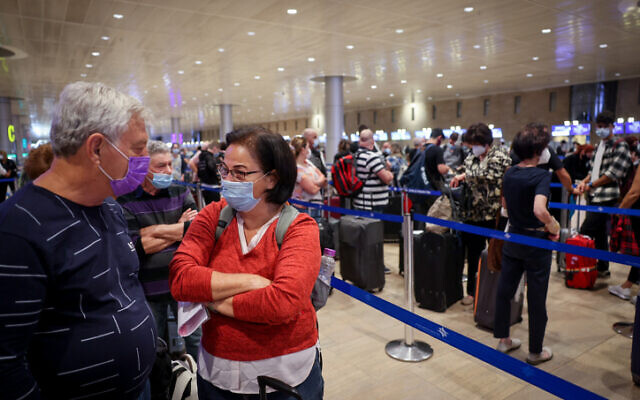 Feldman said that while only two European countries have barred all Israelis, it has shattered the confidence of travelers, who now fear that other countries will make sudden decisions to implement similar bans.

“We’re trying to tell people that making plans, even for today and tomorrow, is next to impossible,” he said.

The impact on business travel has been enormous, he reported. “Once the EU made its announcement, all [Israeli] businesses planning travel stopped Europe trips completely,” Feldman said.

Frequent changes to Israel’s quarantine regulations for returning travelers are also discouraging travel, Feldman said. The Health Ministry regularly revises rules applying to citizens who return from various countries, and this raises concerns that people will book expecting a quarantine-free return but this will change.