Israel announced it was rolling out a series of goodwill gestures toward the Gaza Strip on Wednesday, expanding its fishing zone to its furthest point in years and allowing into Israel thousands more workers from the enclave, despite ongoing nightly riots along the border.

“These civil steps were approved by the political echelon and are dependent upon the continued preservation of security stability for an extended period. An extension of them will be considered in accordance with a situational assessment,” Israel’s military liaison to the Palestinians said in a statement.

The measures went into effect first thing Wednesday morning, according to the liaison, formally known as the Coordinator of Government Activities in the Territories.

They included expanding the Gaza Strip’s fishing zone to 15 nautical miles — the furthest distance Israel has permitted since the Hamas terror group took control of the enclave in 2007. In addition, more goods and construction materials will be allowed into Gaza through the Kerem Shalom Crossing, and an additional 5 million cubic meters (1.3 billion gallons) of water will be allowed into the Strip, whose aquifers have long since deteriorated.

Five thousand more workers will also be allowed into Israel from Gaza — on top of the 2,000 already permitted in — though only those who either had the coronavirus or have been vaccinated will be eligible, COGAT said.

The measures were announced the morning after hundreds of Palestinians demonstrated violently on the border between Gaza and Israel, for a fourth straight night of riots.

Palestinians burn tires during a protest along the border fence with Israel, east of Gaza City in the central Gaza Strip, on August 30, 2021. (Mohammed Abed/AFP)

Gazans from so-called “night confusion units” set tires alight and rolled them toward soldiers stationed along the frontier, and lobbed improvised explosives, in a repeat of violence seen there the previous three nights.

As Israeli troops responded, the Hamas-run health ministry in Gaza said that one Palestinian was moderately wounded from Israel Defense Forces live fire.

There was no immediate comment from the IDF and no reports of injuries on the Israeli side.

The latest violence on the border came as Israel allowed dozens of truckloads of construction materials into the Strip on Tuesday.

Bassam Ghabin, director of the Palestinian side of the Kerem Shalom cargo crossing, said that 30 truckloads of cement, 120 trucks of gravel and 15 trucks of steel entered Gaza. He said that the materials began entering on Monday, and that the crossing was operating almost at the same capacity as before May’s 11-day flareup. 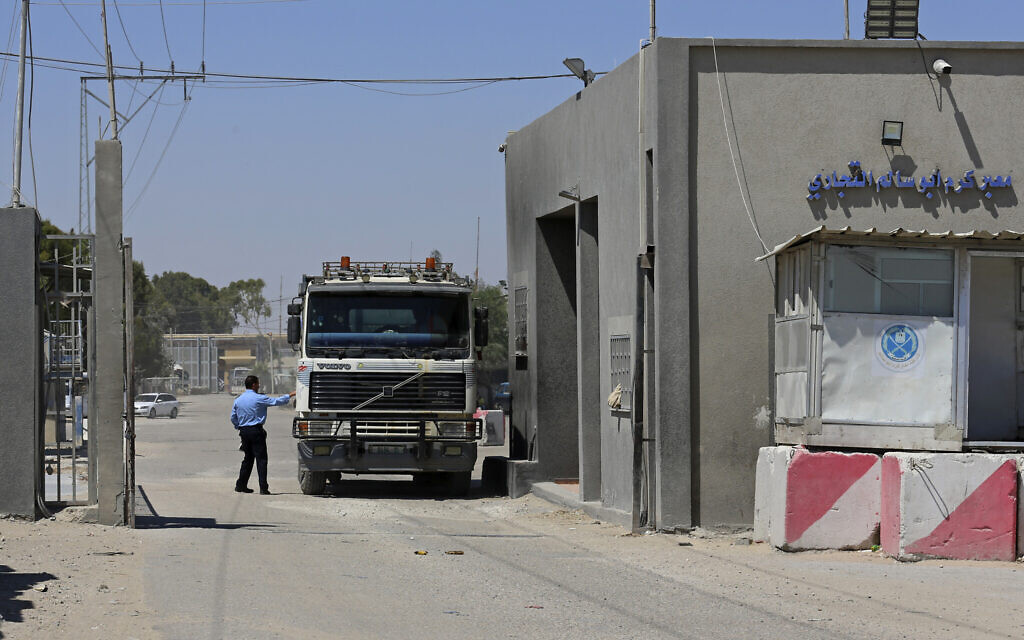 An Israeli security official, speaking on condition of anonymity under policy guidelines, confirmed that building materials had entered Gaza. He had no specific details, but said that they came under previously announced government decisions.

“Calm and security will allow an improvement in civil conditions, but rioting and terror will lead to a strong response or operation,” he said.

“We have improved our attack capability in the Gaza Strip and our operational plans and if quiet isn’t preserved in the south, we won’t hesitate to embark on another campaign,” he said. “The reality of [Gazans’] lives can be completely different and significantly improved — but that will not be the case as long as terrorist acts of any kind continue.”

Times of Israel staff and the Associated Press contributed to this report.