A reported Thursday morning ceasefire with Palestinian terror groups in the Gaza Strip sparked a flurry of denials from all parties involved, as the White House continued applying behind-the-scenes pressure on Jerusalem to wind down the fighting.

Egypt has proposed an Israel-Hamas ceasefire through private channels that would enter effect on Thursday at 6 a.m., Channel 12 news reported on Tuesday night. The report cited Palestinian sources saying Hamas has agreed to the offer, while there has been no response from Israel.

But it took less than an hour for denials to begin pouring in.

“No agreement or specific timings for the ceasefire were reached,” Izzat al-Rishq, a member of the terror group’s leadership said in a statement.

The efforts to coordinate a ceasefire — led by the United Nations, Egypt, Qatar and other countries — are ongoing, al-Rishq said. “While emphasizing that the efforts and contacts of the mediators are serious and continuous, the demands of our people are clear and well-known.”

Palestinians check the damage after an Israeli airstrike in Gaza City, on May 18, 2021. (Atia Mohammed/Flash90)

Exercising similar caution, a diplomatic source familiar with Egypt’s efforts to broker a ceasefire told The Times of Israel that negotiations were still ongoing and that no such agreement had been reached yet.

Several Hebrew media outlets quoted the same “Israeli official” who also poured water on the report, denying it off hand.

However, both Israel and Hamas have in the past several years vehemently repudiated reports of ceasefires, which nevertheless went into effect shortly thereafter.

The Haaretz daily on Tuesday night quoted another Israeli official who said that barring any last-minute surprises, a ceasefire would likely be reached by Thursday morning.

“There is no decisive [win] and there likely won’t be,” the official said. “Everyone is tired.”

Prime Minister Benjamin Netanyahu earlier on Tuesday said the military operation, now in its ninth day, will go on “as long as needed to restore calm for the citizens of Israel.” 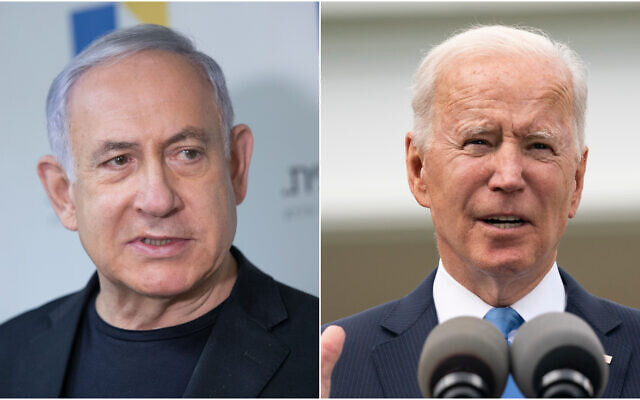 US President Joe Biden and administration officials have encouraged Netanyahu and other top Israeli officials to end the fighting, a person with knowledge of the discussions said Tuesday.

Top Biden administration officials underscored to the Israelis on Monday and Tuesday that time is not on their side in terms of international objections to nine days of Israeli airstrikes and Hamas rockets, and that it is in their interest to wind down the operations soon, according to the official, who was not authorized to comment publicly on the private talks and spoke on condition of anonymity.

The White House has so far resisted the calls for ramping up public pressure on Netanyahu and made the calculation that Israelis will not respond to international resolutions or public demands by the US and that its greatest leverage is behind-the-scenes pressure, according to the person familiar with the administration’s discussions.

The source said that the Israelis have signaled that it is possible their military campaign could end in a matter of days.

The account shows Biden administration officials going further privately in messaging to Netanyahu than they have previously revealed. A White House readout of a Biden call to Netanyahu on Monday said Biden had expressed support for a ceasefire, but said nothing about the US urging Israel to bring fighting to a close.

Biden’s decision to express support for, but not explicitly demand, a ceasefire was intentional, an administration official familiar with the call said. 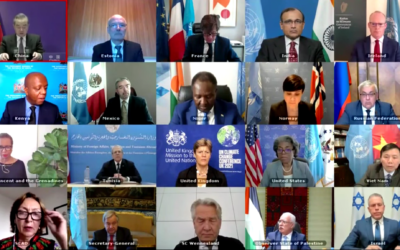 The UN Security Council holds an emergency session on the violence in Israel and Gaza on May 16, 2021. (Screen capture/UN)

Separately, a UN Security Council emergency meeting earlier Tuesday on the situation in Gaza ended without any result, four diplomats involved told The Times of Israel.

The closed-door session was the fourth in nine days held by the top UN body and came a day after the US blocked a joint statement calling for a ceasefire for the third consecutive time.

While the Norwegian, Chinese and Tunisian missions that initiated Tuesday’s meeting did so to increase international pressure for a ceasefire, two Security Council diplomats told The Times of Israel they weren’t really sure why another consultation was held, given that member states knew the US position had not moved in last 24 hours.

Norway’s UN mission has continued to call for the council to “speak with one voice” on the escalation in Gaza, but with the US insistent on pursuing its own avenues in order to bring about a ceasefire, the top UN body has been placed in a “wait and see mode” for the time being, one diplomat said.

On Thursday, the UN General Assembly will be meeting for the first time on the same topic and a majority of countries are expected to voice solidarity with the Palestinians, call for a ceasefire and criticize Israel. There is not yet an expectation that the meeting will include an effort to pass a resolution on the matter, diplomats said.

Twelve people in Israel, including a 5-year-old boy and a 16-year-old girl, have been killed in the rocket fire from Gaza, and hundreds have been injured.

According to Gaza’s Hamas-run Health Ministry, at least 212 Palestinians have been killed so far in the nine days of the conflict, including more than 60 children. It was not immediately clear if this ministry tally included all of those killed or if there were Hamas operatives not included in the count. According to the IDF, more than 120 of those killed were members of Hamas and over 25 were members of the Palestinian Islamic Jihad as of Monday night.