Israel’s coronavirus czar Professor Nachman Ash said Saturday that, despite suggestions to the contrary, Israel has not reached herd immunity and expressed concerns about a new “Indian variant” found in the country.

Speaking Saturday during a TV panel, Ash said that even though over five million people in Israel have received at least one dose of a COVID-19 vaccine and another nearly one million have recovered from the disease, “it is not enough.”

“We need to reach about 75 percent [of the population] having been vaccinated and/or recovered to reach herd immunity, but we are seeing low morbidity data,” explained Ash.

The latest Health Ministry figures showed 95 new coronavirus cases were diagnosed on Friday, accounting for just 0.7% of the 14,182 samples tested. There were 2,680 active cases, and the death toll since the start of the pandemic stood at 6,315. The ministry also said 5,341,887 Israelis have received at least one coronavirus vaccine dose and 4,965,696 have received two shots.

In response to plans to lift the requirement for wearing masks outside and to fully reopen all schools starting Sunday, Ash urged Israelis to stay vigilant and continue to wear face masks indoors, and even outdoors in crowded areas.

“True, the risk of infection outside is not great. The big challenge is to carry the mask in your pocket and put it on whenever you get to a closed or crowded place,” he said.

Ash also said that the identification of an “Indian variant” among arrivals to Israel from abroad was cause for concern, as the variant showed “some bad signs.”

The Health Ministry on Friday said that the strain was found among seven unvaccinated travelers who returned to Israel from abroad, without revealing where.

The majority of cases were identified through tests conducted at Ben Gurion Airport while the remainder were identified while the arrivals were still quarantining, Ash said. He added that not very much is known about the new variant but that it appears to spread rapidly. 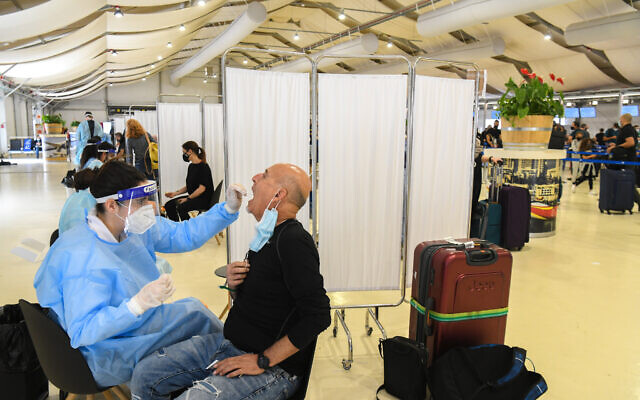 Medical technicians test passengers for the coronavirus at the Ben Gurion International Airport near Tel Aviv on March 8, 2021. (Flash90)

“This mutation… has some bad signs about it. We are comparing the findings in the genetic sequencing to what we know and there are some indications that it may be resistant to the vaccine,” Ash said, adding quickly that, so far, the Pfizer vaccine has been effective against known mutations

India has confirmed the new and potentially troublesome variant of the coronavirus, which has two mutations in the spiky protein that the virus uses to fasten itself to cells. Dr. Rakesh Mishra, director of the Centre for Cellular and Molecular Biology, said last month that these genetic tweaks could be of concern since they might help the virus spread more easily and escape the immune system.

India is currently battling a widespread surge in infections, with experts suspecting the most likely cause is the presence of more infectious variants, including the one detected in the country.

The virus has been mutating throughout the pandemic. Most mutations are trivial, but scientists have been investigating which ones might make the virus spread more easily or make people sicker.

The three variants first detected in South Africa, the UK and Brazil are considered the most worrisome. The most widespread of these was the more contagious variant that was detected in the United Kingdom last year. The extensive spread of the UK strain in Israel has been blamed for the severity of the Jewish state’s third coronavirus wave earlier this year. 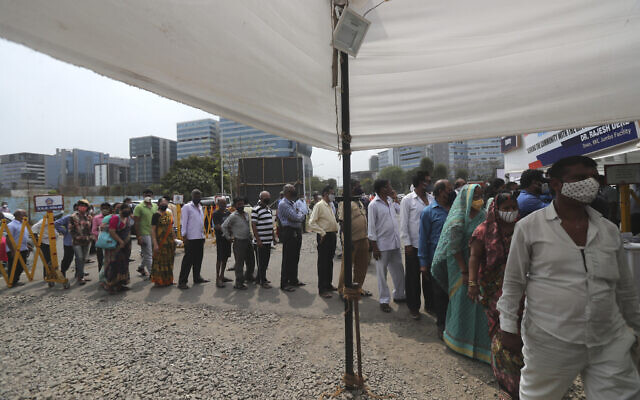 In a report last week, the Health Ministry designated several countries as more likely to be a source of mutated coronavirus strains that could have greater resistance to current vaccines. The report did not mention India.

Earlier Saturday, Health Ministry Director-General Chezy Levy acknowledged the declining case numbers in an interview with the Kan public broadcaster, but urged Israelis not to act as if the country is entirely in the clear.

“There is a huge drop in morbidity, but my advice is that where people congregate very closely together they should wear a mask,” he said. “We must behave correctly in order not to scuttle the progress made.”

Levy lamented that 20 percent of teachers in the country are still not vaccinated, adding that with children below the age of 16 unable to inoculate, “we’re taking risks here as well.” Levy has predicted that vaccination for 12-15-year-olds will begin next month.

On Sunday, all students from daycare to 12th grade will return to regular in-person classes, ending the requirement that some children still learn in smaller class sizes. Children in grades 5-9 had been the only remaining students required to study in socially distanced “capsules” or pods. Students will still be required to wear masks indoors but will be allowed to take them off during gym class, when they eat, and in between classes. 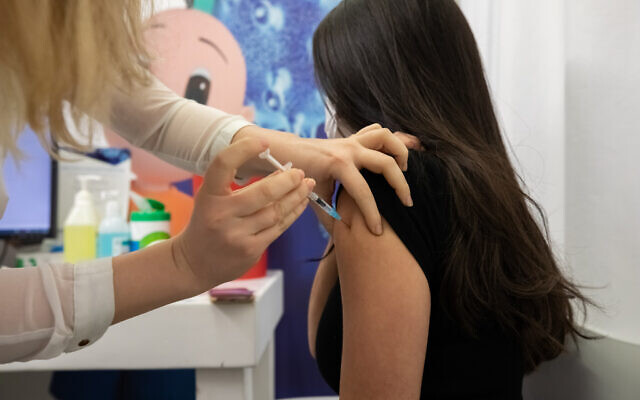 After suffering a severe third wave of the pandemic, Israel’s situation has rapidly improved in recent months as it has carried out the world’s fastest per capita vaccination drive. Over half of the population is fully inoculated against COVID-19, and the results have shown, with daily new cases and serious cases dropping to levels not seen in long months.

As the caseload has dropped, Israel has gradually rolled back coronavirus restrictions by opening businesses, event venues and other activities.

Ash has said the entire economy will be able to fully reopen next month if there is no new rise in contagion.