Israel on Thursday marked the milestone of having inoculated 2 million people with the first dose of the Pfizer-BioNTech coronavirus vaccine, as the country pushed forward with the national vaccination drive amid record daily infections.

The person declared as the two-millionth Israeli to get the first dose was a kindergarten teacher from the central city of Ramle. Prime Minister Benjamin Netanyahu and Health Minister Yuli Edelstein, both of whom have received the second dose, were on hand at the Maccabi Healthcare Services clinic in the city.

“It’s already become routine… It’s something we’re happy to grow accustomed to, but mostly we want to finish this,” Netanyahu said. “We’ll continue — to the next million.”

The prime minister said the government was working on rolling out the “green passports,” which will grant those vaccinated or who have recovered from COVID-19 access to certain gatherings and events that are currently banned.

Netanyahu urged Israelis to adhere to government-mandated virus restrictions and said no decision had yet been made on extending the third nationwide lockdown, which health officials have signaled will last beyond the original January 21 end date.

Prime Minister Benjamin Netanyahu (2nd-L) and Health Minister Yuli Edelstein (2nd-R) at a Maccabi Healthcare Services clinic in the central city of Ramle as a kindergarten teacher becomes the 2 millionth Israeli to be vaccinated against COVID-19, January 14, 2021. (Screen capture: Facebook)

Israel kicked off its vaccine drive last month and on Sunday began administering second doses. It is currently first in the world in the number of people vaccinated per capita, according to the Oxford University-based Our World In Data.

Coinciding with the launch of the vaccination campaign has been a surge in coronavirus cases, with over 9,000 daily new infections diagnosed in recent days.

There has also been a sharp rise in fatalities and the number of patients in serious condition from COVID-19 complications.

Due to the high morbidity and mortality figures, the government last week tightened lockdown measures that took effect a week earlier, ordering the closure of schools and businesses.

Police were gearing up to significantly expand enforcement of the nationwide coronavirus lockdown over the weekend, setting up checkpoints that will operate 24 hours a day.

Police said dozens of checkpoints will be set up along main highways, as well as within cities and towns. The increased enforcement measures will begin at 6 a.m. Friday.

The lockdown rules prevent Israelis from traveling beyond a kilometer from their homes, except for essential reasons. Fewer Israelis are expected to be traveling over the weekend when their workplaces close. 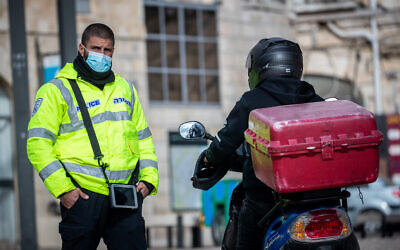 Police at a temporary checkpoint at the Jaffa Gate in Jerusalem’s Old City, on January 14, 2021, during a third national coronavirus lockdown. (Yonatan Sindel/Flash90)

The lockdown rules prevent Israelis from traveling beyond a kilometer from their homes, except for essential purposes. Fewer Israelis are expected to be traveling over the weekend when their workplaces close.

“During the weekend we intend to give out fines and make it difficult for those traveling on roads because we understand there is no reason to go out,” Assistant Commissioner Yishai Shalem, the head of the Israel Police’s operations department, was quoted saying by the Ynet news site.

Shalem said police were content with their enforcement measures over the past week.

Police also said there was a 34 percent rise in the number of fines issued this week compared to the previous week, before the tightened lockdown measures came into force.