AFP — As scientific warnings of dire climate change-induced drought grow, many in Israel and Jordan cast worried eyes at the river running between them and the critical but limited resources they share.

This month, the UN’s Intergovernmental Panel on Climate Change showed unequivocally that the climate is changing faster than previously feared, heaping pressure on finite water supplies even as demands grow greater than ever before.

But experts say that instead of provoking argument, Israel and Jordan could be poised for an unprecedented boom in water cooperation amid technological advancements, climate pressures and stronger ties.

“Water is a resource that allows for adversaries to actually find ways to cooperate,” said Weinthal, a specialist in global environmental politics, who has worked extensively on Israel-Jordan issues. “If you look at the data, you see more cooperation over water than conflict, and where there is conflict, it is usually verbal,” added Weinthal, a leader in the emerging academic field of environmental peace-building.

Jordan is one of the world’s most water-deficient countries, suffering from extreme droughts, and water cooperation with Israel long predates a 1994 peace deal between them.

An aerial picture taken on July 15, 2021, shows a section of the Jordan River flowing along the border with Jordan (background), south of the Sea of Galilee, or Lake Tiberias, one of the main water sources in Israel. (MENAHEM KAHANA / AFP)

The issue came to prominence in 1921, when Pinhas Rutenberg, a Russian-Jewish engineer who had moved to Mandatory Palestine, convinced British authorities and Hashemite royals to approve a hydropower station where the Yarmuk tributary meets the Jordan River. It continued after Israel’s founding in 1948, through decades when the nations were officially at war.

Water deals between Jerusalem and Amman suffered in recent years under former Israeli prime minister Benjamin Netanyahu, whom critics have accused of neglecting Jordan as he pursued deeper ties with Iran’s foes in the Gulf.

But there have been signs of progress since Prime Minister Naftali Bennett’s government took office in June, with the countries agreeing to their largest-ever water transaction last month.

“The people that are going to invest in more desalination very much see the opportunities for profit,” Bromberg said.

It means that Israel — one of the world’s desalination leaders — can sell more water, including natural freshwater from the Sea of Galilee, to Jordan without threatening domestic demand, he said.

And Israel has a new incentive to do so, because it now needs something from Jordan in return, according to experts.

To meet the 2015 Paris climate accord commitments, Bennett’s government has approved a target of reducing greenhouse gas emissions in the energy sector by at least 85 percent. 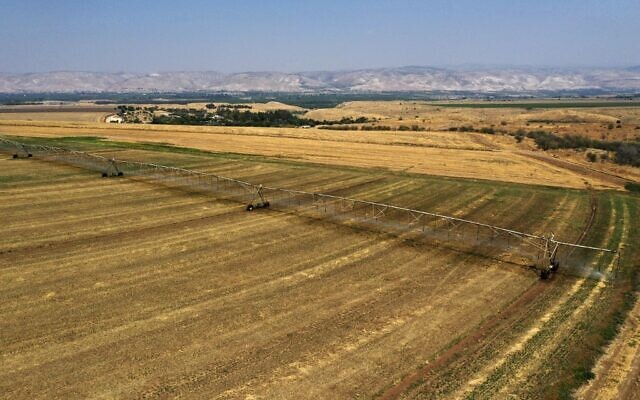 A picture taken on July 15, 2021, shows a center-pivot irrigation system spraying water in agricultural fields near the border with Jordan (background), south of the Sea of Galilee, or Lake Tiberias, one of the main water sources in Israel. (MENAHEM KAHANA / AFP)

Multiple assessments show Israel does not have enough land to ramp up the necessary solar production, so it will have to buy solar power from Jordan to hit its targets.

“For the very first time, all sides will have something to sell and something to buy,” said Bromberg, whose organization works in Israel and Jordan as well as the West Bank and Gaza, which are also struggling from a worsening water crisis.

This unprecedented alignment of interests could help repair semi-fractured diplomatic relations, he argued.

“There are relatively few opportunities to try and rebuild trust,” Bromberg added. “Water and energy are one of those rare opportunities.”

Not long after taking office, Bennett flew to Amman to meet King Abdullah II, who told CNN he was “very encouraged” by several recent talks with top Israeli officials. The July deal binds Israel to sell an additional 50 million cubic meters of water to Jordan.

Israel and Jordan have held meetings on water cooperation since the mid-1950s, including the “Picnic Table Talks” — US and UN-mediated discussions that helped shape water agreements in the 1994 peace deal. 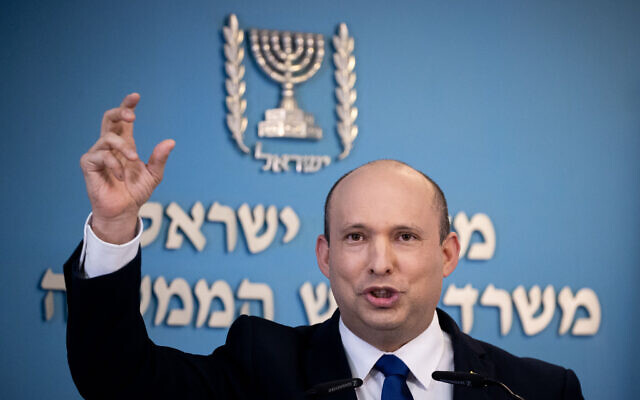 Weinthal described those talks as “a lifeline for when these countries were technically at war.” But he also cautioned against investing too much hope in environmental diplomacy.

“This [latest] water agreement really breathes life into rekindling relations but… unless it is couched in the broader political process of dealing with the occupation, it will only go so far,” she said.

In announcing the historic deal, Amman’s top diplomat Ayman Safadi stressed the need to establish a Palestinian state along Israel’s pre-1967 borders, with East Jerusalem as its capital. Those are terms that are anathema to Bennett’s government.

But water pressures are mounting.

“Jordan… is now the second-most water insecure country in the world, by some measures,” The Century Foundation, a US think tank, wrote in a December report. “Water needs are expected to exceed resources by more than 26 percent by 2025.”