The mantra of the Resilience Center in Ashkelon, Israel, is, “When I am needed, I am less defeated.”

Ashkelon has been one of the cities most targeted in this latest round of fighting between Hamas and Israel, now reportedly set to end with both sides agreeing to a cease-fire.

Though the death toll on the Israeli side of this conflict has been low compared to that in Gaza, and lower than one might think with 4,000 rockets fired across the border, the stress has been immeasurable. Psychotherapist Judith Bar-Hay of the Resilience Center said that keeping children busy with tasks around the house helps them forget their worries. It’s important they feel responsible, she said. It gives them courage.

“Sending letters to soldiers, calling their grandmother….doing the laundry, washing the dishes,” Bar-Hay said. She also suggested things like anointing children in communal shelters “Minister of Sports” to have them organize exercise for everyone, or “Minister of Religion” to rally neighbors for prayer as another tool to help distract those who are scared, as most are, with sirens sounding day and night. But Bar-Hay said she tells children not to be afraid of the sirens. They are like seatbelts, she said. They save lives.

A family huddles in their home with bomb technicians and police as sirens warn of an incoming attack, Thursday, May 20, 2021, in Ashkelon, southern Israel. The family residence had just received a direct hit from an unexploded missile that landed on the top floor of their high rise apartment building.
(AP Photo/John Minchillo)

Social workers see a lot of older children wetting their beds, unable to sleep and zombie-like during this period. A lot hangs on the shoulders of parents, often frightened themselves. If adults channel calm, it will help their children pass through an experience like war less scarred, according to people at the Center.

Israel has established a solid network of emotional support, built on years of experience of siege.

In Gaza, where life is dire even in the absence of all-out conflict, the situation is more complex.

“I think the one thing that stands out, and that comes out of every person in Gaza right now, is that nowhere is safe. You can move from one place to another and you’re still going to be in harm’s way,” said Karl Schembri of the Norwegian Refugee Council. He said the worst thing for a parent is not being able to protect a child, so his heart goes out to them as much as the small kids living with large blasts.

Two million people live crowded into the 139 square miles that are the Gaza Strip and they can’t just flee. They need special permission from the Israeli government or Egypt, their other neighbor, and it is generally only granted under extenuating circumstances such as for medical treatment. That in itself creates great stress, Schembri said. The NRC works with children in Gaza who carry anxiety and fear with them through the various violent events they experience through periodic fighting with Israel.

“They suffer from terrific nightmares, very violent nightmares, more than three to four times a week, which is totally abnormal for people of their age,” Schembri said. “Nightmares where people are dying in all sorts of terrible ways.”

The NRC works with these children through their schools. Twelve of the children they were treating for trauma-related issues were killed in this week’s strikes in Gaza. Schembri said they were killed with their families, huddled in their homes, the most horrific and tragic of endings to the stories of short lives that had already been punctuated with suffering. 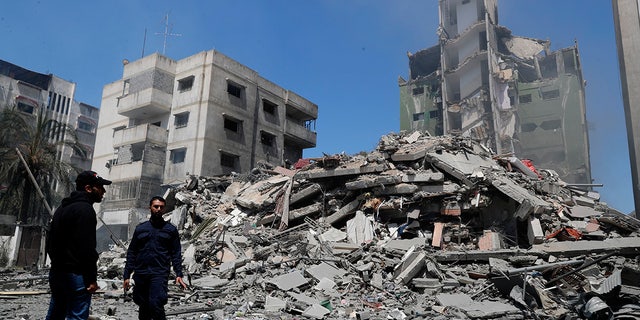 Hamas police officer stands guard amid the rubble of the Yazegi residential building that was destroyed by an Israeli airstrike, in Gaza City, Sunday, May 16, 2021. (AP Photo/Adel Hana)

The problem, he said, is even those children who survive a stretch like this latest round of fighting, and start working through their trauma, will not be in the clear. The term “post-traumatic stress” that implies one major event that leaves wounds that may be healed doesn’t apply in Gaza.

“We can go through a traumatic incident and then look back at that individual incident that has affected us,” Schembri said. “And we can get therapy, we can get through it. It’s post-traumatic stress disorder. Whereas in Gaza there is no ‘post’ because it is continuous and it keeps coming. That’s what the experts, the psychology experts, call ‘toxic stress.’”

Perhaps the silver lining to this dark cloud of war is that there are people like Schembri and Bar-Hay who are dedicated to the well-being of children. And every act of love, kindness and guidance makes some sort of impact.