Israel’s cabinet ratified a mutual visa exemption agreement with the United Arab Emirates on Sunday — the Jewish state’s first ever such agreement with an Arab country.

The ministers voted unanimously to approve the treaty, which was signed in Tel Aviv last month. The UAE government reportedly ratified the agreement on November 1, which means that it will enter into force in 30 days.

“This is the first Arab country with which we have signed such an agreement and this is a step that will facilitate reciprocal tourism,” Prime Minister Benjamin Netanyahu said before the vote at the weekly cabinet meeting.

“Of course, this will develop and strengthen ties between the countries as well as economic links. I believe that every citizen of Israel, the entire world, sees the great change that we are bringing to our region in every field.”

The prime minister mentioned the visit to Israel of Bahraini Foreign Minister Abdullatif bin Rashid al-Zayani last week, noting that Jerusalem and Manama did not have diplomatic relations until very recently.

“This is an immense change,” he said.

During al-Zayani’s visit to Jerusalem last week, Israel and Bahrain signed an agreement allowing citizens from each country to apply online for a visa to the other country by December 1.

PM Netanyahu addresses the cabinet before it votes on the peace treaty with the UAE, October 12, 2020 (GPO)

Netanyahu went on to say Sudan — an Arab-majority state that last month agreed to normalize relations with Israel — had “for the first time, abstained in a vote against Israel at the UN, after it has traditionally voted against us.”

Said Netanyahu: “These are signs of what is to come, and not only in these fields. I hope that we will always have more and more good news.”

The prime minister was referring to a vote on an Israeli resolution — not a vote “against Israel” — called “Entrepreneurship for Sustainable Development,” which passed Wednesday by an overwhelming majority at the United Nations General Assembly’s Second Committee.

However, Sudan did not abstain, but was merely absent from the vote.

The reason behind Khartoum’s absence was unclear on Sunday, but many other countries, some friendly and others hostile to Israel — including Gambia, Turkmenistan, Congo, Mali, Somalia, Niger, the Dominican Republic, North Macedonia, South Korea, Fiji Islands and others — did not participate in the vote, either. 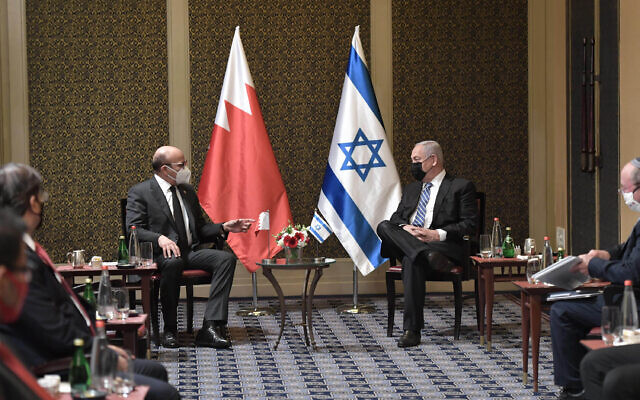 In his remarks Sunday, Netanyahu did not mention that the UAE and Bahrain — another country that recently normalized relations with Israel — on Wednesday joined Iran, Syria, North Korea, Qatar, Saudi Arabia, Pakistan, Tunisia, Venezuela and 20 other countries in voting against the Israeli resolution.

Since agreeing to normalize ties with Israel, Sudan has continued to vote in favor of a whole host of anti-Israel resolutions at the UN, as recently as last week.

The UAE-Israel visa exemption agreement will mean that citizens from both countries will be allowed to enter each other’s countries without having to go through the hassle of applying for a visa first.

It’s the first such arrangement between the Jewish state and an Arab country. Notably, even Israel’s closest ally, the United States, has so far refused to sign a visa exemption agreement with the Jewish state. 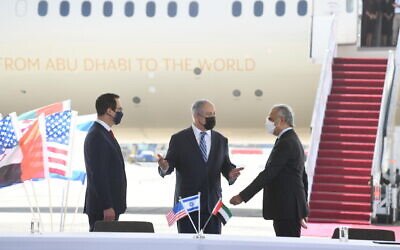 The visa exemption treaty was signed last month during high-level meetings and a ceremony outside Tel Aviv attended by Netanyahu, US Treasury Secretary Steven Mnuchin and two senior UAE ministers — part of the first high-level delegation from the Gulf nation to visit Israel.

After that signing, the Foreign Ministry said the UAE passed along a message that it wished to facilitate the reciprocal opening of embassies in Tel Aviv and Abu Dhabi “as soon as possible.”

The Knesset in October approved Israel’s normalization deal with the UAE by an overwhelming majority, and it was ratified by the cabinet unanimously earlier this month.

Netanyahu is reportedly concerned about potential misunderstandings and incidents stemming from cultural differences between Israelis and Emiratis, ahead of next month’s launching of direct flights between the countries.