Israel has vaccinated 1 million people against COVID-19, more than a tenth of its population, Prime Minister Benjamin Netanyahu said Friday, as the country’s inoculation drive cements its status as the world’s earliest and most rapid.

Netanyahu was on hand to mark what he said was the millionth Israeli to receive a vaccination, in the Arab town of Umm al-Fahm.

Netanyahu called it a moment of “great excitement.”

Arabs make up around 20 percent of Israel’s population and have been relatively slow to embrace the vaccination campaign, prompting Netanyahu to launch a series of visits to Arab localities, his first in years, in what is seen by many as an attempt to score political points ahead of the March elections.

Netanyahu said “it’s important for me that the Arab public in Israel will get vaccinated quickly” because “it’s saving lives.” He delivered the same message at a vaccination center in Tira, another Arab town, on New Year’s Eve.

The Jewish state has so far outpaced other countries, according to statistics from the Our World in Data website operated by Oxford University. Second place is held by Bahrain with 3.37%, followed by the UK with 1.39% (though the latter’s data is a few days old). The US stands at 0.84%.

Israel is currently in its third nationwide lockdown to contain the outbreak. It has reported more than 426,000 cases and at least 3,338 deaths since the pandemic began.

Related: Small wonder: How Israel rolled up its sleeves and became vaccination nation

Israel started vaccinating on December 20, with a focus on healthcare workers and then on those over 60 and at-risk sectors.

Its globe-leading vaccination drive has been attributed to various factors, including its relatively small but densely packed population and highly professional, community-integrated health services.

Next week, a large-scale vaccination center is set to open in Tel Aviv’s Rabin Square, and aims to inoculate approximately 5,000 people per day, the city’s municipality said in a statement Thursday.

The vaccination tent and 20 vaccination booths will be operated by medical staff from Ichilov Hospital, starting with Tel Aviv residents over 60, and later to all Israeli citizens.

Throughout the pandemic, Rabin Square was used as a COVID-19 testing site, conducting over 1,500 tests per day. The testing site is expected to continue operations alongside the vaccination center, even as it ramps up inoculations.

The campaign currently uses the Pfizer vaccination, which requires two shots, spread a few weeks apart. Though not yet available to the general public, vaccination centers have also been opening their doors to all comers at the end of each day in an effort to make sure vaccine units available for immediate use do not go to waste.

So far some 41% of over 60-year-olds have had their first shot, according to Health Ministry figures released Friday.

However, a shortage of injections means the ministry might be forced to semi-freeze the campaign for two weeks in January. The pause would allow those who have received the first dose to get the second dose, but new first doses would not be given. 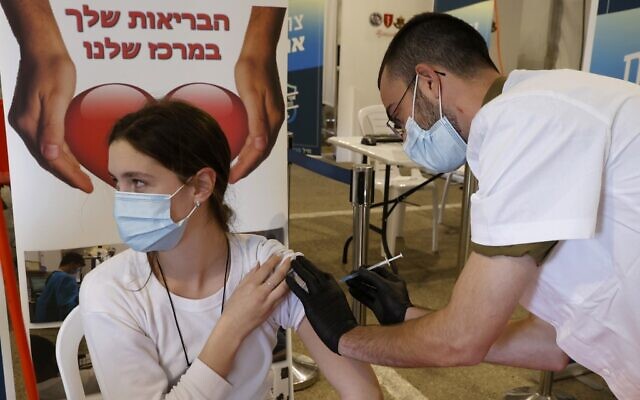 An IDF medic gets vaccinated against the COVID-19 coronavirus at the medical center of Tzrifin military base in Rishon Lezion on December 28, 2020. (JACK GUEZ / AFP)

Channel 12 news reported Thursday that one million vaccines from the US biotech company Moderna will arrive in Israel next week, rather than in March as had previously been agreed, boosting dwindling supplies. However, the Health Ministry said it had no such information.

“We would like to clarify that as of now, we don’t have information about Moderna’s intention to move up the delivery of millions of vaccines to Israel,” the ministry said in a statement.

Later, the network cited sources in Moderna as insisting the shipment was ready and that its departure was only a matter of final approval. The report said Moderna officials were “surprised” at the ministry’s apparent denial.

It was not clear how this statement squared with the threat of a shortage.

While the inoculation program has ramped up, so have infection rates, which prompted a third national lockdown that began on Sunday.

Daily infections have topped 5,000 over the past few days. They remained steady on Thursday with 5,804 cases confirmed and 5.7% of tests coming back positive, similar to previous days. It was the fourth straight day with more than 5,500 confirmed cases.

Netanyahu has said Israel is aiming for some 2.25 million Israelis out of a population of 9.3 million to be vaccinated by the end of January.