Israel is set to give tens of thousands of coronavirus vaccines to some 15 countries in exchange for diplomatic backing, according to a television report Tuesday.

Nearly 100,000 doses in total will be given to other countries, the Kan public broadcaster reported.

A final list of countries has yet to be finalized, but the report said it would include Italy and Chad, as well as other unspecified African states that renewed diplomatic ties with Israel. The Czech Republic, Guatemala, Honduras, Hungary — which have opened diplomatic missions in Jerusalem or pledged to do so — were also expected to receive vaccines.

The doses will reportedly come from the supply of vaccines Israel purchased from Moderna.

The report came after the broadcaster revealed earlier Tuesday that Israel is offering vaccines to various countries in return for diplomatic support and will send thousands of doses for medical staff in the Palestinian Authority.

The Prime Minister’s Office confirmed that it was sending thousands of vaccines to the Palestinian Authority as well as shots to other destinations, without specifying further.

According to a statement from the PMO, Israel has been contacted by numerous countries with requests for vaccines. The statement didn’t name the countries or the type of vaccines that will be donated, only saying that thousands of immunizations will be sent to Ramallah, the seat of the PA government in the West Bank.

Top government ministers were kept in the dark about the plan, which is being pushed by Prime Minister Benjamin Netanyahu.

“The fact that Netanyahu is trafficking [in] the vaccines of Israeli citizens, which were paid for with their tax money, without accountability, shows that he thinks he’s running a monarchy, not a state,” Defense Minister Benny Gantz tweeted.

He added: “Such a process requires discussion and approval. Only a security, diplomatic, or urgent medical need could justify such a process and Netanyahu must present this to the public or at the very least have it approved by the relevant forums.”

Finance Minister Israel Katz, a member of Netanyahu’s Likud party, also said he was unaware of any plan to hand over vaccines to various countries in exchange for diplomatic support.

On Sunday, the radio station reported Netanyahu was interested in offering vaccines for diplomatic support. In conversations with a number of government sources, Netanyahu reportedly raised the possibility of giving vaccine doses to certain unnamed countries in a bid to improve Israel’s diplomatic standing in the world.

The Foreign Ministry reportedly said that surplus vaccines will only be given to other countries after Israel has completed vaccinating its own population. 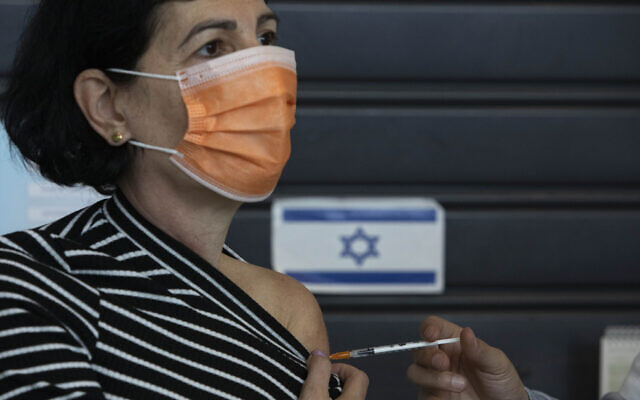 An Israeli woman receives a Pfizer-BioNTech coronavirus vaccine at a vaccination center in Tel Aviv, on February 2, 2021. (AP Photo/Sebastian Scheiner)

The reports on Netanyahu’s hopes to use coronavirus vaccines to help diplomatic relations come after Israel was said to have agreed to purchase an unknown number of Russia’s Sputnik V vaccine doses for use in Syria as part of a deal for the return of an Israeli woman who was held by the Syrian regime after she crossed the border two weeks ago.

Also Tuesday, Netanyahu said he spoke with the head of Pfizer about acquiring more vaccines, amid reports suggesting there could be a shortfall.

The premier was also quoted by Army Radio telling ministers that Israel is negotiating the purchase of millions of additional coronavirus vaccines, in anticipation that it will need to administer boosters in six months.

Israel’s vaccination campaign is far ahead of any other country’s worldwide. Nearly four and a half million Israelis, or almost 50% of the country’s total population, have now received the first dose of the coronavirus vaccine, Health Ministry data showed Tuesday. Over 3 million Israelis have received both doses.

The premier was personally involved in negotiating deals to secure millions of the Pfizer-BioNTech vaccines for the country, accelerating its inoculation drive. The government aims to vaccinate the entire over-16 population by the end of March.