The Israeli government has said it will relax some restrictions on goods and mail entering and leaving the Gaza Strip, after weeks of a tight ban, since the recent round of fighting, a Palestinian official who coordinates with Israel said on Sunday night.

Al-Ziq added that Gazans stuck abroad since the 11-day escalation between Israel and the Hamas terror group would now be allowed to reenter the enclave via the Erez Crossing from Israel.

Exports of clothing and food to Israel and the West Bank would also recommence, he said.

The Palestinian official said that passports held by Israeli mail would be released. Around 5,000 authorized travel documents are currently being held in Ramallah, waiting to be sent to their owners, the Haaretz daily reported last week.

A truck loaded with humanitarian aid, passes into Rafah in the southern Gaza Strip, through the Kerem Shalom crossing, the main passage point for goods entering Gaza from Israel, on May 21, 2021, after a ceasefire brokered by Egypt between Israel and the Palestinian Hamas terror group. (SAID KHATIB / AFP)

According to al-Ziq, the Palestinian coordination body was told that the change in policy would go into effect on Monday morning.

The Israeli military branch that manages Palestinian civilian affairs, known widely by its acronym COGAT, did not immediately respond to a request for comment.

The reported easing comes as Israel and the Gaza Strip have seen continued tensions. Gaza-based terror groups have launched explosive balloons into Israeli territory, igniting bonfires in areas close to the Strip, and Israel has responded with airstrikes against Hamas targets.

While a ceasefire between the two sides ended the fighting in late May, international mediators have warned that it remains fragile, and have said that they seek to strengthen it.

Israel and Egypt have blockaded the coastal enclave since 2006, imposing tight restrictions on the movement of people and goods. Both countries say the blockade prevents Hamas terrorists from posing an even more serious security threat.

But rights groups lament the impact the restrictions have had on Gaza’s civilian population. The tight sanctions have led to high unemployment and crumbling infrastructure, and bureaucratic entanglements can make leaving the Strip through its Israeli and Egyptian crossings a very difficult task.

During the recent round of fighting between Israel and Hamas in May, Israel shut down all the crossings with the Gaza Strip. Only a few exceptions were made for specific aid convoys to enter the coastal enclave during the fighting. Gaza-based terror groups bombarded some of the convoys, wounding one Israeli soldier, the Israeli military said. 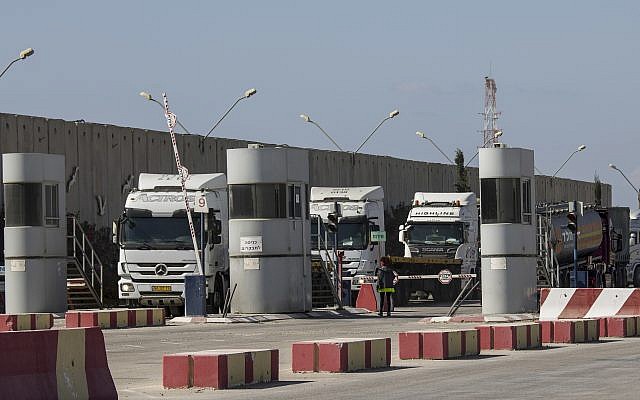 Since the 11-day escalation, a few restrictions have been eased. Gazans seeking medical care were allowed to leave the enclave for treatment in hospitals in Israel and in the West Bank.

But Israel still maintains tight control over goods, including mail, that enter and leave the Strip. Defense Minister Benny Gantz has said that Israel will not permit a full reconstruction of Gaza — with the influx of materials that would entail — without the return of two Israeli civilian captives and the bodies of two Israeli soldiers currently held by Hamas.

Hamas, for its part, has rejected any connection between the reconstruction of Gaza and a potential prisoner exchange with Israel.