Israel saw a record number of travelers pass through Ben Gurion International Airport this week since the start of the COVID pandemic as the country loosens its travel restrictions.

Some 22,500 people passed through the airport with 150 outgoing flights on Thursday, the Kan public broadcaster reported on Friday. However, this is still a far cry from the record 115,000 daily passengers recorded in the summer of 2019.

The majority of the passengers were Israelis traveling abroad, particularly to Mediterranean counties, the Balkans and the US.

Incoming traffic is expected to pick up soon too with Israel indicating on Thursday that it could ease entry procedures for foreign visitors who have been vaccinated against the coronavirus from the beginning of next month, allowing regular tourists traveling outside organized groups to enter the country for the first time since the start of the pandemic.

International travel to Israel has been greatly limited, due to lockdown restrictions imposed to prevent COVID-19 strains from reaching the country. At times, Israel’s borders were entirely shut to foreigners. Tourists cannot currently travel to the country unless visiting a first-degree relative, and then under restrictive conditions.

Interior Minister Aryeh Deri sent a letter Thursday to Border Authority Director-General Shlomo Mor-Yosef telling him that he had consulted with the Health Ministry Yuli Edelstein, Foreign Minister Gabi Ashkenazi, and professional teams from various ministries on the matter.

As a result, a decision was taken to allow vaccinated visitors from a list of countries that is yet to be determined by the Health Ministry “to enter Israel with a shortened process that will be put together in the coming days.”

He did not explain what the “shortened process” would involve.

Deri told Mor-Yosef that in light of the COVID-19 vaccination programs in other countries, “there is room to broaden the easing of entry to Israel for foreigners and to change the existing methods of approval that put an enormous load on Israel’s representatives abroad and on the Immigration and Population Authority in the country.”

Deri wrote that the target date to start the pilot would be July 1. 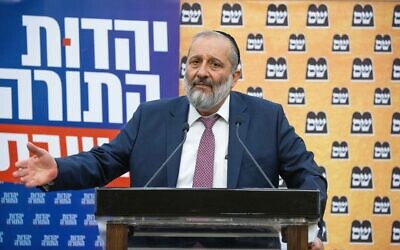 Tourism Minister Orit Farkash-Hacohen welcomed the move, tweeting that “it is about time that Israel opens up to tourism and takes advantage of being a vaccinated country for the benefit of its economy.”

Farkash-Hacohen said that the changes would apply to individual tourists, rather than groups.

In April, Farkash-Hacohen unveiled a four-part plan to restart foreign tourism to Israel in the shadow of the COVID-19 pandemic, including a global advertising campaign, flight incentives to Eilat, and the reintroduction of large international events.

A national inoculation drive has already seen over half the Israeli population vaccinated against COVID-19 and brought down daily caseloads from the thousands seen at the beginning of the year to just six people diagnosed on Wednesday.

Health Ministry data published Friday showed there are just 218 active virus patients in the country. Since the start of the outbreak early last year 839,653 people were diagnosed with COVID-19 in Israel and 6,428 are known to have died of the disease.

Israel has largely lifted domestic lockdown restrictions on public life that were applied to prevent the virus from spreading.