Israel shut down on Wednesday evening for Yom Kippur, the Jewish Day of Atonement and the holiest day of the Jewish calendar, even as security forces remained on high alert amid a recent spike in attacks.

This Yom Kippur comes as the country is battling a fresh wave of coronavirus and Wednesday saw long lines and a rush to get tested before most testing stations also shut for the holy day.

All flights in and out of Ben Gurion airport ceased at 1:35 p.m. The airport will reopen Thursday night with arrivals starting at 9:30 p.m., while departures will resume at 11:30 p.m. During this period Israel’s air space is also closed to flights passing through.

Border crossings also shut just after noon and will reopen at 10 p.m. on Thursday.

Public transport also halted with buses and trains stopping their routes until after the fast day. Inner-city busses will gradually restart from 8 p.m., while inter-city transport will restart from 9:30 p.m. Thursday.

Thousands of religious Jews pray for forgiveness at the Western Wall in the Old City of Jerusalem on September 15, 2021, prior to the Jewish day of Atonement Yom Kippur, which begins Wednesday evening. (Arie Leib Abrams/Flash90)

Roads were expected to largely clear of cars by early evening as is the national tradition — to be replaced with multitudes of people on bicycles and other non-motorized vehicles.

Driving during the Jewish Day of Atonement is considered taboo, and many secular Israelis have turned the day into a biking holiday, taking advantage of the car-free roads.

Security and rescue services, however, remain on high alert.

In Jerusalem, some 2,000 police officers were deployed, with roadblocks and checkpoints set up around the Old City, with thousands of worshippers expected at the Western Wall. Police were also guarding houses of worship across the country. 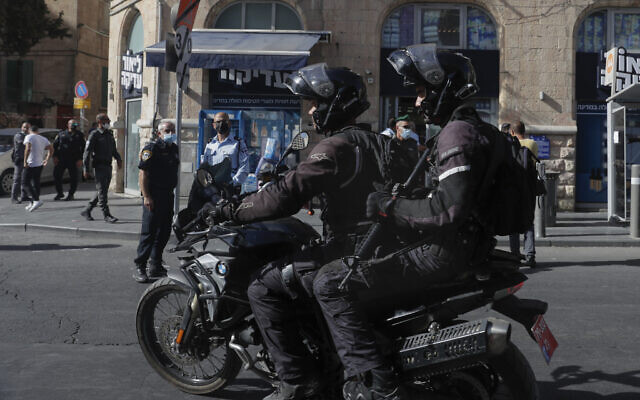 Jerusalem has seen a spate of stabbing attacks in recent days, apparently in solidarity with six Palestinian security prisoners who escaped from the Gilboa Prison last week. Two of the six are still on the run.

Searches for the two fugitives were expected to continue on Yom Kippur, Channel 13 reported, with the focus now on the northern West Bank.

The IDF also imposed a closure on the West Bank and Gaza, a standard practice over Israeli holidays in a bid to ward off attacks.

For the Magen David Adom Rescue service, Yom Kippur is one of the busiest days of the year with hundreds of extra medics, paramedics, ambulances and volunteers deployed across the country.

Most injuries over Yom Kippur come from accidents on the roads as tens of thousands of children and teens take advantage of the deserted streets to ride their bicycles. Other common Yom Kippur injuries are caused by parents leaving children unattended outside synagogues and, of course, dehydration and complications from fasting. 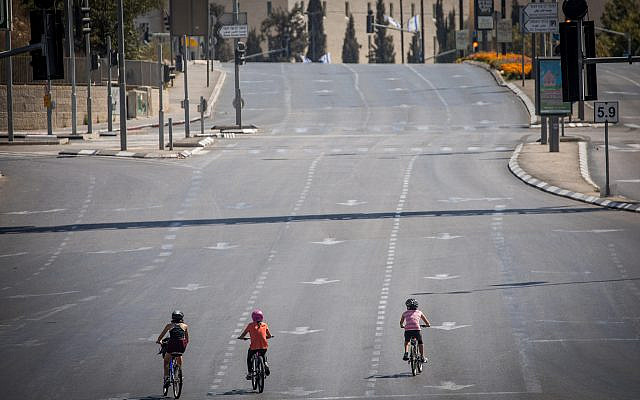 People ride their bicycles along the empty road in Jerusalem on Yom Kippur, the Day of Atonement, October 9, 2019. (Yonatan Sindel/Flash90)

Hospitals were working with limited emergency medical crews only.

Thousands went to be tested for the virus ahead of the holiday, with long lines and waits of up to 90 minutes reported in some places.

More than 50,000 tests were carried out before centers shut at noon, and Magen David also administered some 10,000 rapid tests.

The weather was set to be cooler than usual (although still warm) with a scattered rain forecast and a high of 29°C (84°F) for Tel Aviv and 26°C (79°F) for Jerusalem.