“No law will change history,” said Lapid on Thursday, saying the bill “is a disgrace that will not erase the horrors or the memory of the Holocaust.”

The legislation, which passed late Thursday evening with 309 votes in favor, zero votes opposed and 120 abstentions, according to Polish state news agency PAP, sets a 30-year deadline for Jews to recover property seized by Nazi German forces, essentially preventing any World War II-era compensation claims or appeals of past decisions. The legislation must now reportedly be approved by the Polish Senate after being okayed by the Sejm, the lower house of Poland’s parliament.

“It is a horrific injustice and disgrace that harms the rights of Holocaust survivors, their heirs, and members of the Jewish communities that existed in Poland for hundreds of years,” said Lapid. “This is an incomprehensible action. This immoral law will seriously harm relations between the countries.”

Lapid said it was “extremely worrisome and grave” that Poland was ignoring the 2009 non-binding Terezin Declaration, which laid out guidelines for Holocaust-era property restitution.

“The State of Israel will stand as a wall of protection in defense of the memory of the Holocaust, as well as to defend the honor of Holocaust survivors and their property,” said the foreign minister.

In this February 5, 2018 photo, far-right groups hold a demonstration in front of the presidential palace to call on President Andrzej Duda to sign a bill that would limit some forms of Holocaust speech in Warsaw, Poland. (AP Photo/Czarek Sokolowski)

“Polish lawmakers should bow their heads and be ashamed of the step they took this evening,” Cohen tweeted.

Earlier this week, the World Jewish Restitution Organization called for the legislation to be withdrawn.

“We urgently call upon Prime Minister Morawiecki and the Polish government to address the issue of private property restitution in a just and timely manner,” said Gideon Taylor, WJRO’s chair of operations. The legislation “would further harm Polish Holocaust survivors who have already suffered so much. In 2021, new, insurmountable legal conditions, that would make it impossible to recover property or receive just compensation, should not be imposed.”

Bix Aliu, the chargé d’Affaires at the US Embassy in Warsaw, reportedly objected to the legislation in a letter to the speaker of the Polish parliament.

“Our understanding is that this draft bill would effectively make restitution or compensation for Holocaust or Communist era property unobtainable for a large percentage of claims,” Bix Aliu wrote according to the Dziennik Gazeta Prawna daily, reported Reuters.

According to Ynet, President Reuven Rivlin wrote a letter earlier this week to Polish President Andrzej Duda expressing his opposition to the legislation.

The law would “very much obscure our joint efforts in strengthening the relations between our countries and in securing the partnership between our nations,” Rivlin reportedly wrote. “Since I very much appreciate the relationship between us, I have decided to appeal to you that your esteemed government consider the consequences of such legislation.” 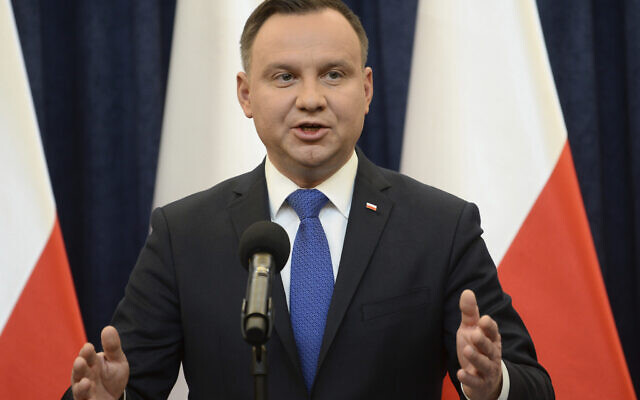 Holocaust restitution in Poland is unpopular among many citizens, and Duda campaigned against it ahead of his reelection last year. Many Polish citizens believe that claims should only be addressed to Nazi Germany and that it is unfair for Poland to pay out any damages from the Holocaust era.

“There won’t be any damages paid for heirless property,” Duda said last year. “I will never sign a law that will privilege any ethnic group vis-à-vis others. Damages should be paid by the one that started the war.”

Poland is the only country in the European Union that has not passed comprehensive national legislation to return, or provide compensation for, private property confiscated by the Nazis or nationalized by the communist regime.

Issues of Holocaust restitution and revisionism have repeatedly plagued Israeli-Polish ties. In 2018, Warsaw passed a law that made it illegal to accuse the Polish nation or state of complicity in Nazi German war crimes. The move sparked an outcry from Israel, but the standoff largely ended when Poland agreed to amend the law to remove any criminal penalties.

Last January, Duda refused to attend the World Holocaust Forum in Jerusalem after he was not invited to speak at the event. A week later, during a meeting in Krakow, Rivlin asserted that “many Poles stood by and even assisted in the murder of Jews” during the Holocaust, something Poland has worked to deny, despite historical evidence.

Leading Israeli historians have claimed that Poland consistently attempts to understate anti-Jewish atrocities committed by Poles before, during and after World War II.

JTA and Times of Israel staff contributed to this report.