Samuel, 39 — a former member of Israel’s national basketball team until 2006, when she suffered a spinal stroke and became paralyzed in her lower body — was one of Israel’s flagbearers at the international event. She took home a bronze medal in Rio five years ago, and another bronze at the 2019 World Rowing Championships in Ottensheim, Austria.

On Sunday, Samuel completed the race in 11:18.39, behind Norway’s Birgit Skarstein who won the gold. France’s Nathalie Benoit picked up the bronze.

Also Sunday, Israeli paralympic swimmer Mark Malyar — who won a gold medal and broke a world record on Friday — shattered another global record during the men’s 400 meter freestyle round (4:41.82) and advanced to the finals.

His fellow Israeli swimmers Veronika Guirenko and Bashar Halabi, however, failed to qualify for the finals in their respective categories.

Ami Omer Dadaon with his silver medal at the Paralympics in Tokyo, August 28, 2021 (Kan TV screenshot)

Dadaon, 20, has cerebral palsy. His mother Yafa told Channel 12 news: “Everyone is happy and overjoyed. He is our pride. He believed in himself all along the way and always dreamt of an Olympic medal.”

She noted that Dadaon was set to compete in several more races. “We all hope he comes back with more medals,” she said. 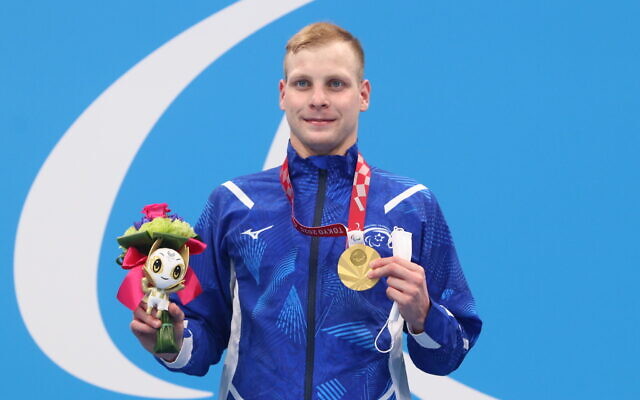 Malyar, 21, won the men’s 200-meter individual medley final in the SM7 category after finishing with a time of 2:29.01. Silver was taken by Andrii Trusov of Ukraine, while bronze was snagged by Colombia’s Carlos Serrano Zárate.

It was the second gold medal for Israel in Paralympic swimming in three days, after that had not happened since 2004.

On Wednesday, it was Iyad Shalabi who won the 100-meter backstroke in the S1 category, becoming the first Arab Israeli to medal in either the Paralympics or the Olympics.