Some 1,500 people gathered outside the Israeli Embassy in London on Sunday to express support for Israel following 11 days of fighting with the Hamas terror group in the Gaza Strip.

The British capital has seen massive pro-Palestinian rallies and a series of antisemitic attacks that have raised fears in the British Jewish community about homegrown anti-Jewish bigotry emerging from the pro-Palestinian movement. According to the Community Security Trust, antisemitic incidents rose by 600 percent during the fighting.

Under heavy police protection, locals gathered with flags while speakers lambasted Hamas and called on the international community to support Israel.

The rally is part of a series of events planned by Jewish and pro-Israel groups on Sunday following pro-Palestinian rallies in major cities throughout Europe and North America a day earlier.

The London event was organized by the Zionist Federation of UK and Ireland.

Approaching the Solidarity with Israel rally in Central London pic.twitter.com/m5YtlpFA8E

Addressing the crowd, Israel’s Ambassador Tzipi Hotovely, sounding hoarse, said she had lost her voice in recent days while “loudly standing up for Israel,” the Jewish News, The Times of Israel’s London-based partner site, reported.

Hotovely thanked the demonstrators, saying, “Israel sees you and hears you and thanks you.”

Speaking to the Jewish News, Zionist Federation chairman Paul Charney cited the “unprecedented rise in antisemitism” and said, “By attending this rally we are all reiterating that we will not be cowed by it. We hope that our friends in Israel see this act of solidarity and know that they are not alone with many supporters in London.”

The rally comes just two days after a ceasefire between Israel and Hamas brought to a close 11 days of fighting, during which Palestinians in Gaza fired over 4,000 rockets at Israel, which responded with heavy airstrikes.

Similar rallies are planned in the United States.

The Israeli-American Council, an organization of expat Israelis in the US, announced a rally in downtown Manhattan at the World Trade Center memorial.

The rally will march roughly a kilometer (0.6 miles) to the riverfront site of the city’s Museum of Jewish Heritage, organizers said.

Other rallies are planned in Los Angeles, Houston, Atlanta and elsewhere.

A “Stand Up For Israel” rally in Philadelphia is slated to draw local elected officials and religious leaders, organizers announced.

Police maintain a cordon as demonstrators rally in support of Israel outside the Israeli Embassy in central London on May 23, 2021. (Tolga Akmen/AFP)

Many of the rallies are accompanied by online events, including a Facebook event supporting the London rally.

In the US, an online event organized by Israel365.com, an Israel advocacy organization that reaches out to pro-Israel Christian Evangelicals, tells visitors that “anti-Israel protestors are rallying against the Jewish State, and now is the time that Israel needs you more than ever!” It offers supporters a chance to join a “virtual rally on Zoom.”

Saturday saw pro-Palestinian gatherings in Britain, France, the US and elsewhere, during which demonstrators condemned Israel and in many places called for its dismantling or likened the Jewish state to Nazi Germany.

According to the Campaign against Antisemitism watchdog, placards brandished at the London pro-Palestinian rally included numerous comparisons of Israel to the Nazis.

???????? London is scene of another antisemitism-strewn demonstration as terrorist flags fly over crowds and speakers declare that Israel creates antisemitism and “there will be no ceasefire in our campaign”https://t.co/VDC9QW7QJi

— Campaign Against Antisemitism (@antisemitism) May 22, 2021

“Israel, the new Nazi state,” read one, while another said: “Nazis are still around, they call themselves Zionists now.” Prime Minister Benjamin Netanyahu “surpasses Hitler in barbarism,” read another poster, while others accused Israel of carrying out a “Holocaust” against the Palestinians.

In London, tens of thousands attended a march and rally. According to organizers from the Palestinian Solidarity Campaign, 180,000 participated, making it the largest pro-Palestinian demonstration the country had ever seen.

Among those who addressed the crowd were former Labour Party leader Jeremy Corbyn and John McDonnell, a lawmaker for the party.

Just a car flying a Palestinian flag driving around central London dragging an Israeli flag along in the dirt to the sound of applause & screaming.

McDonnell told the crowd: “Yes, a ceasefire has been negotiated and we welcome a ceasefire. But let’s be clear, there will be no ceasefire in our campaign to boycott, disinvest and sanction the Israeli apartheid state.”

One protester was seen holding a banner with an image of Jesus bearing the cross and a slogan reading “Don’t let them do the same thing again today.”

Interesting anti-Italian rally happening in London, the Romans were occupying the land of Israel/ Judea and caused the execution of a Jew called Jesus. The sad reality is that vile antisemitic tropes are suddenly commonplace in our country pic.twitter.com/I87lxw5M5c

A similar demonstration in London last weekend, as the fighting was still raging, saw some protesters also carry openly antisemitic banners, though organizers asked those attending not to bring signs that equated Israel or Zionism to the Nazis, the Jewish News reported.

However, speaker Tariq Ali, an activist acquaintance of Corbyn, reportedly criticized right-wing Israelis, telling the crowd on Saturday, “They have learnt nothing from what happened to them in Europe. Nothing.”

“They talk a lot about saying all those marching for Palestine are antisemites. This of course isn’t true,” Ali said, according to the report. “Every time they bomb Gaza, every time they attack Jerusalem – that is what creates antisemitism.”

And it sounds like this is coming from Tariq Ali.

Following the demonstration, Corbyn, who was forced to resign as Labor chief and was later temporarily suspended from the party over claims he mishandled antisemitism in the party, tweeted a photo of himself at the rally with the message: “The ceasefire is welcome but permanent peace can only be achieved with a free and independent Palestine.”

More protests in support of the Palestinians were held in other UK cities, including Manchester, Bristol, Peterborough, and Nottingham, the Guardian newspaper reported. 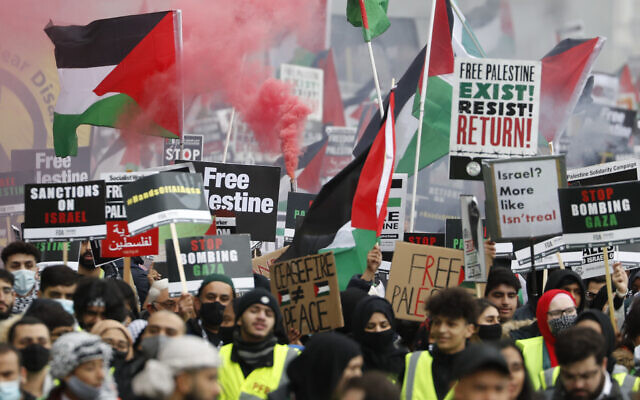 Protesters hold placards and banners in London, May 22, 2021, as they take part in a rally supporting Palestinians (AP Photo/Alastair Grant)

Across the Channel, several thousand people marched in Paris and other French cities in support of Palestinians.

The Paris demonstration was restricted to a rally at the Place de la Republique. Last weekend, thousands of activists defied a ban on a similar demonstration to march in the capital.

The CGT trade union said up to 4,000 people attended the Paris rally.

The capital marchers shouted slogans such as “Palestine will live, Palestine will win,” “Israel assassin, Macron accomplice” and “We are all Palestinians.” 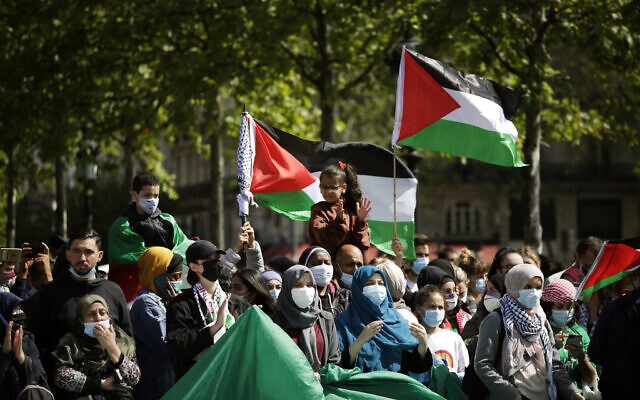 Bertrand Heilbronn, president of the France Palestine Solidarity Association, which organized the Paris rally and other demonstrations, told AFP the ceasefire had not resolved anything.

“This fight concerns all those who are attached to the values of justice, dignity and law,” he said.

Other protests took place in cities around France.

Regional officials said 1,100 people marched in the southeast city of Lyon, as many as on the previous weekend.

In the northern city of Lille, organizers said around 1,000 attended a rally while police put the number at 650.

Other protests were held in the eastern French city of Strasbourg, as well as Toulouse and Montpellier in the south.

“Palestinians have a right to live in peace and have a state,” said Imad Deaibis in Strasbourg. “Israel has deprived us of our rights and of our houses. I am Palestinian but I no longer have the right to go there, my family has lost everything.” 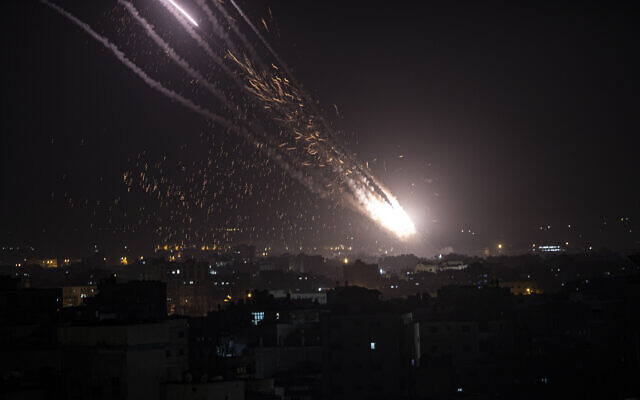 During the 11-day conflict, dubbed in Israel Operation Guardian of the Walls, Hamas and other terror groups fired more than 4,300 rockets toward Israel while the IDF responded with hundreds of airstrikes against terror targets in Gaza.

The Hamas-run Health Ministry in Gaza says at least 243 Palestinians were killed, including 66 children and teens, with 1,910 people wounded. It does not differentiate between terror group members and civilians. The Israeli army says some of the Gaza casualties were caused by the terror groups’ rockets falling short and landing inside Gaza.

Twelve people were killed in Israel, all but one of them civilians, including a 5-year-old boy and a 16-year-old girl.

The fighting began May 10, when Hamas terrorists in Gaza fired long-range rockets toward Jerusalem. Palestinian terror groups tied rocket fire from Gaza to unrest in Jerusalem connected to prayers on the Temple Mount during the Muslim holy month of Ramadan and to the pending eviction of a number of Palestinian families from the Sheikh Jarrah neighborhood.