Israel announced on Wednesday a bailout plan for El Al Israel Airlines that will see the government purchase $210 million worth of advance tickets for security personnel.

According to the Reuters news agency, the tickets are for airline security personnel posted at the airports that El Al and its low-cost subsidiary Sun d’Or will fly to over the next 20 years.

The figure will stay the same even if security requirements change over time, the report said.

The government recently offered to back 82.5% of a $300 million loan to the airline under the understanding that its new owner, Eli Rozenberg, would invest further cash and implement a plan that would cut further costs.

The Finance Ministry said in a statement that the ticket program would replace the loan offer and is contingent on El Al issuing capital of $105 million, meaning the company has to come up with that sum through a sale of shares that will supplement an injection of $43 million from the controlling shareholder.

Passengers walk in the arrivals hall at the Ben Gurion International Airport near Tel Aviv on March 8, 2021. (Avshalom Sassoni/Flash90)

The ministry said a similar plan would be offered to other Israeli airlines used by aviation security and that the plan would be brought before the cabinet for approval in the coming days.

The aviation industry has been one of the most battered by the coronavirus, as social distancing, lockdowns and border closures have grounded flights. Following restrictions on international travel, El Al suspended regular passenger flights in mid-March 2020. Since then, some flights have resumed to a limited number of destinations.

Israel mostly shuttered its airport on January 25 and only recently began easing rules for air travel, allowing 3,000 Israelis to enter the country per day ahead of next week’s national election.

On Wednesday, however, the High Court of Justice ruled that restrictions on citizens entering the country must be scrapped, effective Saturday, saying they was unconstitutional and unparalleled in the democratic world.

The ruling prompted government officials to weigh alternative plans to curtail air travel to prevent the import of variants that could prove resistant to the vaccines. 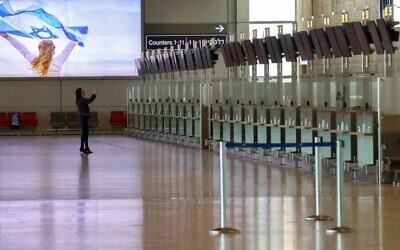 A woman takes a photo at the deserted departure hall at Ben-Gurion International Airport in Lod, near Tel Aviv, on January 25, 2021. (Emmanuel DUNAND / AFP)

According to Channel 12 news, the proposals under consideration include raising the number of Israelis allowed to enter per day to 6,000-8,000.

Officials have already held several meetings on the issue and the network said the government could approve new restrictions that apparently would pass muster with the court. It said no official decision has been reached.

Airlines also appeared set to increase flights to and from Israel after the removal of the daily cap of 3,000. Israir, Arkia and El Al were expected to announce the return of multiple routes, Hebrew media reports said. 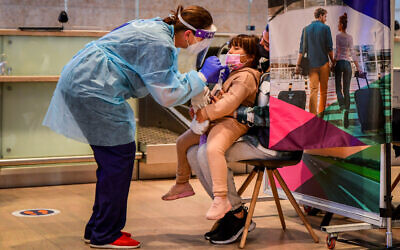 In December, El Al reported a whopping loss of $147 million following a 94 percent drop in revenues for the third quarter of the year, as a second wave of the coronavirus “dramatically affected” operations of the company, causing it to halt regular passenger and cargo flights.

Since the start of the crisis the company has taken a number of steps to cut costs and improve cash flow – reducing its activity, increasing cargo activity when possible, outsourcing most of its employees, and cutting salaries of its executive board and the board of directors by 20%. The firm also came to agreements with banks to defer payments, and the lease agreements for two 737-800 aircraft were canceled.

Shoshanna Solomon contributed to this report.