Two Israeli firefighting planes will be dispatched Sunday to Cyprus to help a battle a large fire in the mountainous region of the east Mediterranean island nation that has forced the evacuation of at least seven villages.

Prime Minister Naftali Bennett signed off on the move Saturday evening, with a government statement citing the “close ties between Israel and Cyprus, in particular on mutual assistance in times of crises.”

Israel will also send fire retardant materials, according to the joint statement from the Prime Minister’s Office, Foreign Ministry and Public Security Ministry.

The statement also said Foreign Minister Yair Lapid spoke with his Cypriot counterpart Nikos Christodoulides and pledged Israel “will do everything it can to help Cyprus in getting control of events.”

The announcement came after Cyprus on Saturday requested emergency assistance from Israel and the European Union to help fight the wildfire.

Cypriot Environment Minister Costas Kadis told state broadcaster CyBC that the fire has claimed “huge tracts of forest” and private property near the village of Arakapas in the Troodos mountain range.

A view of flames from a fire in the Larnaca mountain region, Saturday, July 3, 2021. (AP Photo/Petros Karadjias)

Cypriot President Nicos Anastasiades said on Twitter that this was “a very difficult day for Cyprus” and that the “entire state apparatus” has been mobilized to assist in fighting the blaze which strong winds have fanned across multiple fronts in difficult, hilly terrain.

“The main priority is to avoid any loss of life,” said Anastasiades.

News reports showed homes going up in flames and massive plumes of brown smoke blotting out the sun. Arakapas residents who helped fire crews battle the fire told the CyBC the fire moved much too quickly through forested areas to be brought under control.

The fire has cut power to at least eight villages. 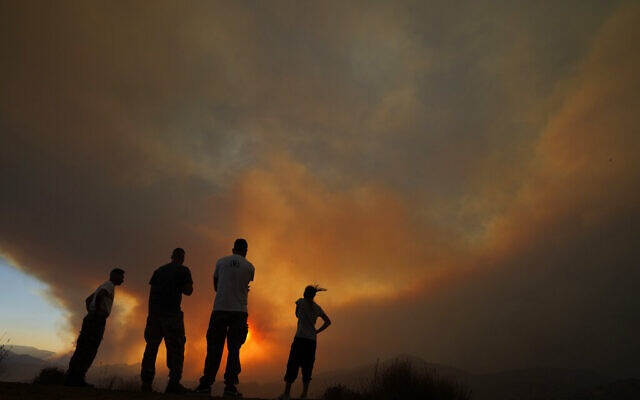 Pelekanos said that fire crews will remain on duty throughout the night when winds are expected to die down, easing fire fighting efforts.

He said Cypriot National Guard drones are mapping the entire expanse of the blaze in order to identify which fronts fire crews will prioritize. Authorities will provide accommodation to people who have lost their homes.

Greek official Nicholas Hardalias posted on his Twitter account that Greece “stands by Cyprus” and that two Canadair CL-415 are on their way.

Four Cypriot firefighting planes were joined by helicopters from the Cypriot National Guard, the police and British forces based at two UK military bases on the island to help beat back the fire in remote areas that ground crews had difficulty reaching. 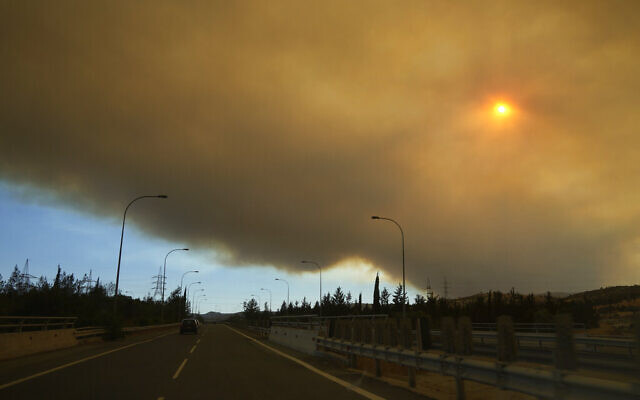 Smoke from a fire in the Larnaca mountain region fills the sky, near the village of Mosfiloti, Saturday, July 3, 2021.(AP Photo/Petros Karadjias)

Fire Service spokesman Andreas Kettis said the entire Cypriot Fire Department has been mobilized with all off-duty firefighters called back into service to help.

Police said they have arrested a 67 year-old man to assist in the investigation into the cause of the fire.