The Ramon Foundation and the Ministry of Science and Technology announced on Wednesday the experiments chosen to be carried out by Israeli astronaut Eytan Stibbe as part of Israel’s Rakia Mission to the International Space Station.

The experiments, called “bold and daring” at the unveiling event at the Peres Center for Peace and Innovation in Tel Aviv, will be part of Axiom Space’s Ax-1 mission, the first ever private mission to the International Space Station, scheduled for the beginning of next year.

Commanded by Spanish-American astronaut and Axiom Space vice president Michael Lopez-Alegria, this will be the first fully private crew in history to live and work aboard the ISS, contingent upon crew approval by NASA and its international partners in the ISS.

On December 23, 2020, the Ramon Foundation issued a call for Israeli scientists, researchers, and entrepreneurs, to submit proposals for experiments to be carried out on the ISS, pending NASA approval, as part of the Rakia Mission, on which astronaut Stibbe will become the second Israeli in space.

Inbal Kreiss, Chairperson of the Scientific and Technological Committee of the Rakia project, and Head of Innovation Systems Missiles and Space Division at IAI – Israel Aerospace Industries, at the announcement of the Rakia research projects at the Peres Center for Peace in Tel Aviv; May 5, 2021 (Elad Malka)

During the past few months, the Ramon Foundation, the Israel Space Agency in the Ministry of Science and Technology, and senior Israeli space experts worked to guide Israeli startups, scientists, and researchers through the submission process. Training seminars and consulting sessions were held to calibrate the experiments with conditions in space.

On Wednesday the scientific and technological committee announced the chosen 44 experiments, based on their potential for technological, scientific and medical breakthroughs and their promise of economic impact. The committee included leading figures from Israeli academia, industry, and government and was headed by Inbal Kreiss, a space industry expert and head of the Innovation Systems Missiles and Space Division at IAI-Israel Aerospace Industries.

The experiments will go to the ISS conditional on raising funds to cover their cost, and on obtaining NASA’s approval. The Israel Space Agency will issue a call for assistance in fundraising once the national budget has been approved, and the Ramon Foundation will help find alternative sources of funding, the organizations said in a statement.

“Israel’s space industry has blossomed over the past few years and today we mark a major leap forward in this field and in positioning Israel as a leading technological player in the global space community,” said Kreiss at the event. “The Rakia Mission fulfills the dreams of Israeli entrepreneurs, researchers and scientists and leverages international collaborations with the world’s most prominent academic and research institutions.”

Space research aims to “break barriers beyond the horizon,” said Kreiss. “There are times when I am proud to be Israeli, and this is one of them.”

Among the experiments selected is that of the Israel Electric Corporation, in collaboration with StoreDot. The experiment will test the performance of an innovative lithium-ion battery under micro-gravity conditions. This experiment has received NASA’s go-ahead but is still pending some approvals, a spokeswoman for the Ramon Foundation said. 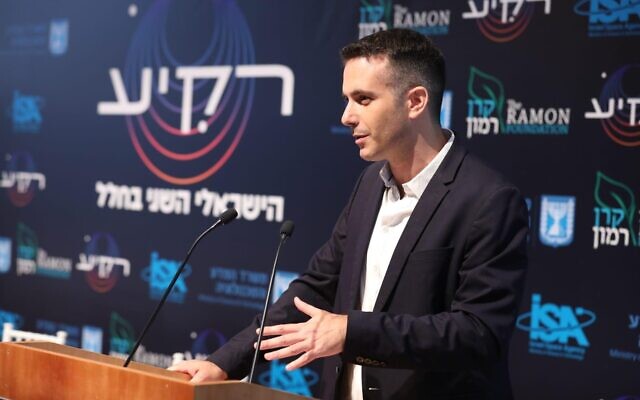 Ran Livne, the CEO of the Ramon Foundation and head of the Rakia mission at the announcement of the Rakia research projects at the Peres Center for Peace in Tel Aviv; May 5, 2021 (Elad Malka)

Another experiment, initiated by the Oncology Department at Schneider Pediatric Medical Center, will include work by the young patients themselves, under the guidance of researchers. The objective is to characterize leukemia cells under microgravity conditions in both the presence and the absence of chemotherapy.

Ten of the selected experiments are the result of a collaboration with international research partners. One of these experiments, the Fluidic Telescope Experiment (FLUTE), was designed and built by researchers in the Faculty of Mechanical Engineering at the Technion in collaboration with a team of researchers at NASA. It will investigate the ability to leverage microgravity to produce high-quality lenses by shaping liquids into desired geometries, followed by their solidification. A successful demonstration onboard the ISS will pave the way to fabrication of advanced optical components in space, including the creation of extremely large space telescopes, overcoming today’s launch constraints, the statement said.

Other research projects selected by the committee include:

“Our vision is that when Eytan conducts each experiment in space, children in Israel will be watching a livestream so they can carry out the same experiment simultaneously in their classroom,” said Ran Livne, CEO of the Ramon Foundation and head of the Rakia mission. “This way, we will introduce the younger generation to the exciting world of science, technology, and space. We’ll connect them with the International Space Station, which educational experts consider to be an unusual and inspiring educational resource for young people.”

He said that the increased number of missions to space will probably see a third Israeli astronaut in space and hopefully one on a national mission, as opposed to a private one, as well.

“In recent years, the global space industry has developed at a dizzying pace and Israel has an enormous potential to become a major player in the field,” said Shai-Lee Spigelman, director general of the Ministry of Science and Technology. “We believe the Rakia mission significantly reduces the barriers that stand in the way of scientists, researchers, and entrepreneurs, accelerates the development processes of the industry, and brings with it new and significant opportunities.”