Prosecutors filed an indictment o Tuesday against a 17-year-old Israeli settler who is accused of throwing stun grenades into Palestinian homes in the West Bank, as well as causing damage to their property.

The filing of the charges at the Central District Youth Court in Ramle made public an undercover investigation into an attack that occurred on January 4.

The unnamed defendant was indicted on charges of conspiracy to commit a crime for racist motives, aggravated battery, carrying a weapon, attempted destruction of property using explosives, deliberate damage to a vehicle as well as other crimes, the Israel Police said in a statement.

The defendant was arrested last week along with four other suspects in connection with the attack in the Palestinian village of Sarta in the northern West Bank.

He has been under house arrest since, while the other suspects are still under investigation, police said.

A stone thrown at a Palestinian home in the West Bank by Israeli settlers. (Israel Police)

The incident is related to another case involving nationalist terror that is still being probed, Channel 13 reported.

According to the indictment, the defendant and seven others — three of whom have yet to be identified — drove to Sarta in two vehicles in the middle of the night and entered the village on foot, armed with stun grenades, large stones, and a sharp instrument.

The defendant threw a stun grenade into two homes as families slept inside, police said. Together with the others involved, the defendant also allegedly hurled stones at four homes and vehicles, causing damage.

As a result of the attack one Palestinian man, 61, was injured in the forehead from broken glass, while his daughter, 17, suffered a serious anxiety attack, dizziness, and confusion. The man and the teen were both taken to the hospital for medical treatment.

Village residents alerted Palestinian police to the attack and they, in turn, contacted Israeli authorities. 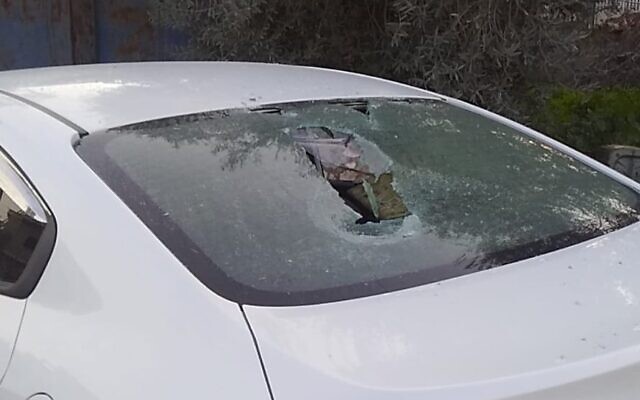 A vehicle in Sarta in the West Bank damaged by Israeli settlers, January 2021. (Israel Police)

Attorneys for the defendant from the Honenu legal aid group said in a statement that there was only one piece of forensic evidence against him.

“We believe that this will not be enough for his arrest and certainly not for the conviction of the minor,” the attorneys said, adding that they would seek his release.

In the wake of the incident, the Yesh Din rights group said in early January it had received reports of 50 incidents in which settlers attacked Palestinians and their property, or blocked key junctions in the West Bank.

The group said at the time it had sent a letter to Public Security Minister Amir Ohana and the heads of the Israel Police and IDF in the West Bank demanding they bring an end to settler attacks on Palestinians, which, at the time, they said were happening on an almost nightly basis. 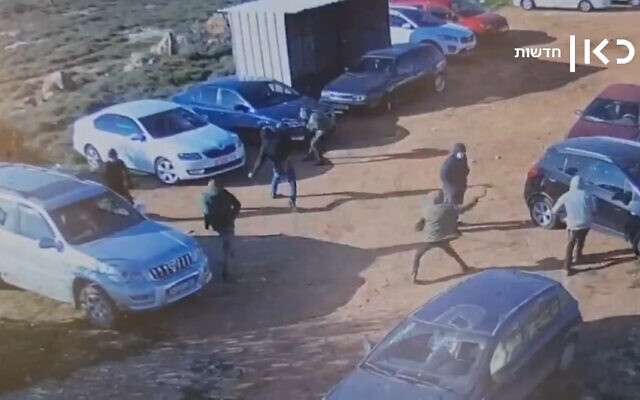 Footage of the suspected hate crime was caught on a security camera, capturing the moment the group — believed to be young extremist settlers, known as “hilltop youth” — damaged at least nine Palestinian cars by the entrance of the settlement.

Settler violence directed toward Palestinians has spiked in recent months following the death of 16-year-old Ahuvia Sandak. The car in which Sandak was riding crashed during a police chase, after he and several others allegedly hurled stones at Palestinians.

According to Yesh Din, there were nearly 50 settler attacks targeting Palestinians in that period, including several that left young children injured.