Israeli archer Itay Shanny’s surprise Olympic run ended Saturday when he lost in the last 8 in the men’s individual competition after a dramatic shoot off was needed to separate him from eventual victor Tang Chih-chun.

Shanny, 22, and his Taiwanese opponent were tied at five sets each and the final result coming down to a single arrow, with the one closest to the center advancing to the quarter-finals.

Shanny, who is the Jewish state’s first-ever archer to reach the Olympics, surprised with his run, knocking out two higher-ranked archers. Shanny had placed 60th out of 64 competitors in the initial ranking round.

Later Saturday, Israel’s mixed team in Judo takes on Italy in the elimination round of 16.

On Friday, Israel’s baseball team lost their second game of the tournament, losing heavily to the US, 8 – 1.

Israel’s Scott Burcham, right, dives and cannot reach a ball picked up by Rob Paller, center, as Blake Gailen (2) looks on during a baseball game against the United States at the 2020 Summer Olympics on July 30, 2021, in Yokohama, Japan. (AP/Sue Ogrocki)

They will now face the lowest-ranked team in Group A of the bracket on Sunday and will need to win in order to remain in contention for a medal.

Historically, many athletes from Arab or Muslim nations have boycotted playing against Israelis in sporting matches. A pair of judokas forfeited their matches this week rather than face an Israeli opponent.

Hershko beat Alqahtani in the women’s +78kg category. The two even shook hands following the match.

Prior to the fight, the Saudi Arabian Olympic Committee announced Alqahtani would be facing the Israeli judoka, in a rare message for a country with no official ties with Israel. 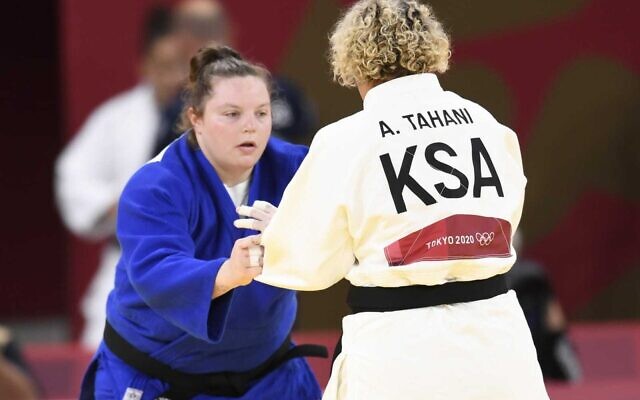 At the same time, Or Sasson, who won bronze in judo at the 2016 Games, lost to France’s Teddy Riner in the men’s +100kg category during the elimination round.

Meanwhile, swimmer Aviv Barzelay finished 8th in the women’s 200m backstroke semi-final on Friday, and will not proceed to the final round. She placed 15th overall.

Sprinter Diana Vaisman, despite reaching her personal best of 11:27 in the 100m race, was bested by rivals from the United States, Jamaica, and Trinidad and Tobago, and finished at 4th place.

Sailer Shay Kakon finished 5th in Friday’s Laser Radial, but placed at an overall 30th, meaning she won’t be advancing to the final round for a chance at a medal.

The results meant that Avishag Semberg’s taekwondo bronze in the women’s -49kg category on Saturday remains Israel’s only medal so far in the 2021 games.