The 5-year-old boy who was the sole survivor of an Italian cable car crash that killed 14 people has been told about his parents’ death, a lawyer for the family told local media Tuesday.

Eitan Biran lost his parents, younger brother and great-grandparents in the May 24 accident near the top of the Mottarone Mountain, in the northwestern Piedmont region. A hospital spokesperson has said the child was apparently saved by the embrace of his father, who died when the cabin crashed to the ground.

After the crash, the boy was airlifted to a hospital in critical condition, where he spent several days intubated and sedated before waking up. Eitan, who suffered chest and abdomen injuries, has since been moved out of intensive care and his condition is improving day by day at Regina Margherita children’s hospital in Turin, Italian news website La Repubblica reported.

The report quoted family lawyer Cristina Pagni as saying he has recently been told his parents have died, while stressing the process is being overseen by mental health professionals.

“He is learning it through his family and psychologists, with all the sensitivity of the case,” she said.

A view shows a journalist working by a cable car’s wreckage covered with a tarpaulin on May 26, 2021 on the slopes of the Mottarone peak above Stresa, Piedmont, three days after a crash that killed 14 (MIGUEL MEDINA / AFP)

“Fortunately, his aunt, paternal grandmother and maternal grandfather are next to him. Other relatives have come up from Israel, it is a large family that is doing everything possible to help him together with the psychologists,” Pagni added.

“It is a delicate but necessary moment which must be respected one hundred percent,” said lawyer Armando Simbari, who is tasked with the complex mission of gathering details of the incident that Eitan may remember.

“We are ready to create a team together with the prosecutor’s office. We will also appoint consultants who can help understand the causes of the tragedy. It is a very complex and dramatic story, both from a technical aspect and from a legal one,” he said.

Eitan’s family, originally from Israel, had moved to northern Italy in 2018, according to Italian media.

The accident shocked Italy, killing Eitan’s family and others out on a Sunday excursion to the scenic spot served by the cable car.

The cable car’s pull cable snapped just before it reached its destination. The car flew backwards, dislodging itself from a second, supporting cable, and crashed to the ground. 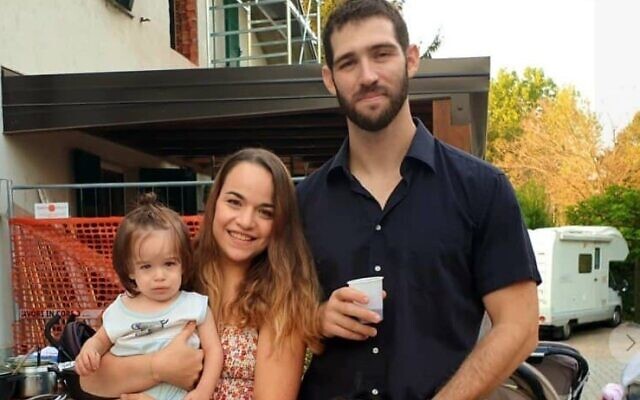 Amit Biran (R), his wife Tal Peleg-Biran and their son Tom Biran, who were killed on May 23, 2021, when a cable car collapsed near the summit of the Stresa-Mottarone line in the Piedmont region, northern Italy. (Facebook)

Investigations have revealed that emergency brakes that could have stopped the car on its supporting cable, avoiding the tragedy, had been deactivated.

Three men — the cable car’s chief technician, a technical director and the owner of the cable car operating company — have been arrested.

The technician, Gabriele Tadini, was put under house arrest after admitting to disabling the brake system because it was malfunctioning, but said his two superiors knew about this. They have denied this, and were released after a judge found a “total lack of evidence” against them. All three men remain under criminal investigation and face multiple charges of manslaughter and negligent disaster.

Israeli victims Amit Biran, 30, his wife Tal Peleg-Biran, 26, and their 2-year-old son Tom Biran, who lived in northern Italy, and Peleg-Biran’s grandparents Barbara and Yitzhak Cohen of Tel Aviv, 71 and 81, were all buried in Israel.