The sole survivor of a deadly cable car crash in Italy was released from an Italian hospital on Thursday, health authorities said, noting that the Israeli 5-year-old’s condition was “much improved.”

Fourteen people, including Eitan’s father Amit Biran, 30, mother Tal Peleg-Biran, 26, 2-year-old brother Tom, and great-grandparents Barbara and Yitzhak Cohen of Tel Aviv, 71 and 81 respectively, were killed in the May 24 accident after a cable snapped on the aerial tram bringing weekend visitors to the top of the Piedmont region’s Mottarone mountain. All five were buried in Israel a few days later.

“Early this morning Eitan was discharged from the Isola Margherita ward of the Regina Margherita hospital,” said the Turin children’s hospital in a statement.

The child — who had suffered severe chest and abdomen injuries — returned home to Pavia, south of Milan, with his aunt, the hospital said.

Rescuers work by the wreckage of a cable car after it collapsed near the summit of the Stresa-Mottarone line in the Piedmont region, northern Italy, May 23, 2021. (Italian Vigili del Fuoco Firefighters via AP)

“His condition is much improved now,” said the statement, adding that a full recovery would take 60 days.

The cable car accident, which came at the start of Italy’s much-anticipated reopening to tourists after coronavirus closures, was the country’s worst in over two decades.

It remains unclear why the pull cable snapped just before the car reached the summit on the 20-minute trip up the mountain.

Investigations have revealed, however, that emergency brakes that could have prevented the tragedy by stopping the car on its supporting cable had been deactivated. Because the brake was not activated, the car flew backwards and crashed to the ground, sliding down the mountain before coming to a stop. 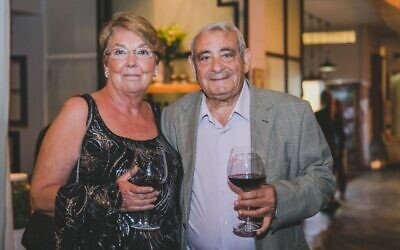 Barbara and Yitzhak Cohen of Tel Aviv, who were killed on May 23, 2022, when a cable car collapsed near the summit of the Stresa-Mottarone line in the Piedmont region, northern Italy. (Courtesy)

Police arrested the owner of the cable car operating company and a technical director, but released them soon thereafter pending an investigation.

The company’s chief technician, however, remains under house arrest. He has admitted to disabling the brake system because of recurring malfunctions, according to the chief prosecutor.

Eitan, who was airlifted in critical condition to the hospital after the accident, spent a week in intensive care with his aunt at his bedside.