The Israeli coach of the Czech Republic’s national men’s basketball team shook hands with his Iranian counterpart, Mehran Shahintab, during the Olympics tournament Sunday, in a rare exchange between members of the hostile nations.

“Obviously it’s special that an Israeli coach is leading a team against Iran,” Ronen Ginzburg told the Ynet news site before the game.

“I just hope they’ll get up and play,” he added.

Iranian athletes have in the past thrown matches to avoid competing against Israelis. The Iranian Olympic basketball team did not, however, protest playing against the Israeli-coached Czech team on Sunday and was subsequently defeated 84-78.

Behnam Yakhchali had a game-high 23 points for Iran (0-1), which trailed by 22 late in the third and by 21 in the fourth before putting together its comeback bid. Mohammad Jamshidi scored 16 and Hamed Haddadi had 15 points and 10 rebounds before fouling out late for Iran.

Jamshidi’s 3-pointer with 1:10 left got Iran within 80-76, but Schilb scored on each of the next two Czech possessions to help close out the win.

Iran opened the fourth quarter on a 15-2 run, getting within 69-61 on a three-point play from Yakhchali with 5:39 remaining. The Czechs missed nine of their first 10 shots from the field in the fourth, seeing their lead get trimmed to single digits for the first time since early in the second quarter.

Both teams return to play Wednesday, with Iran facing the US and the Czech Republic playing France in Group A matchups. 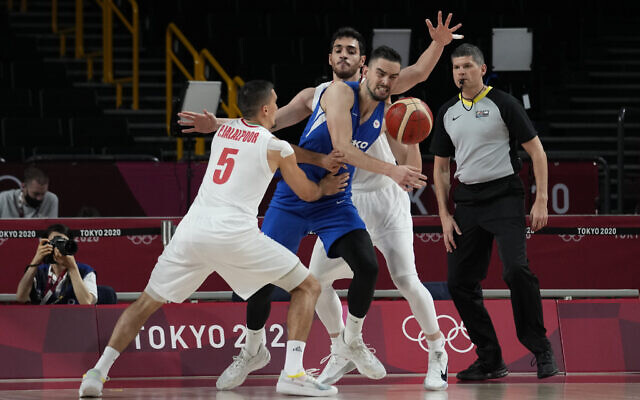 Iranian, Egyptian, and other Middle East teams have in the past been punished for boycotting their Israeli counterparts during international sporting competitions.

On Saturday, Algerian judoka Fethi Nourine and his coach Amar Benikhlef had their Olympic accreditation withdrawn and will be sent home, after refusing to fight an Israeli athlete. The International Judo Federation’s (IJF) executive committee announced they had temporarily suspended Nourine and Benikhlef. In response, the Algerian Olympic Committee withdrew their accreditation, and further sanctions are expected.

In April, the International Judo Federation issued a four-year ban against the Iranian Judo Federation over Tehran’s demands that its athletes refuse to face Israeli opponents. The ban was backdated to begin in September 2019, when judoka Saeid Mollaei left the Iranian team during the World Championship in Tokyo, revealing he was ordered to lose matches and withdraw from competitions to avoid facing Israelis.