The ceremony announcing the winners was marred by jury president Spike Lee mistakenly revealing the winner of the Palme d’Or, the top award, at the beginning of the evening.

Lapid, 46, considered a rising star of Israeli cinema, said that the film was loosely based around his own experiences, with what he called growing political pressure in Israel on artists to avoid controversial topics and a willingness of some to comply.

Speaking ahead of the win, Lapid told AFP his biggest concern was how such moves forced artists to censor themselves, relating how he received a call from an Israeli official, inviting him to present a film in a remote desert village, but also asking him to sign a form promising to stick to certain approved subjects.

“The sad thing in Israel is you don’t have to put tanks in front of the Israeli Film Fund, you don’t have to arrest a director and throw him in jail like in Russia. It’s effective just to say ‘enough politics, guys, let’s talk about family.’

“What bothers me is not the censorship of the state, but when censorship becomes part of your soul, your mind. Censorship from within. It accompanies you like a shadow,” he said.

The director previously won the top prize at the Berlin film festival in 2019 for “Synonyms”, a loosely autobiographical story about a young man trying to shed his Israeli identity when he moves to Paris.

The win on Saturday was mistakenly announced by jury president Spike Lee at the top of the closing ceremony, broadcast in France on Canal+, unleashing a few moments of confusion. Ducournau, a French filmmaker, didn’t come to the stage to accept the award until the formal announcement at the end of the ceremony. But the early hint didn’t diminish from her emotional response.

“I’m sorry, I keep shaking my head,” said Decournau, catching her breath. “Is this real? I don’t know why I’m speaking English right now because I’m French. This evening has been so perfect because it was not perfect.” 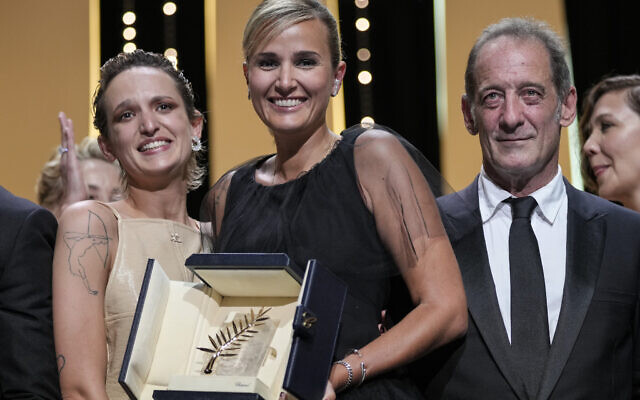 After several false starts, Lee implored Sharon Stone to make the Palme d’Or announcement, explaining: “She’s not going to mess it up.” The problems started earlier when Lee was asked to say which prize would be awarded first. Instead, he announced the evening’s final prize, as fellow juror Mati Diop plunged her head into her hands and others rushed to stop him.

Lee, himself, spent several moments with his head in his hands before apologizing profusely for taking a lot of the suspense out of the evening.

“I have no excuses,” Lee told reporters afterward. “I messed up. I’m a big sports fan. It’s like the guy at the end of the game who misses the free throw or misses the kick.”

Decournau’s win was a long-awaited triumph. The only previous female filmmaker to win Cannes’ top honor — among the most prestigious awards in cinema — was Jane Campion for “The Piano” in 1993. In recent years, frustration at Cannes’ gender parity has grown, including in 2018, when 82 women — including Agnes Varda, Cate Blanchett and Salma Hayek — protested gender inequality on the Cannes red carpet. Their number signified the movies by female directors selected to compete for the Palme d’Or — 82 compared to 1,645 films directed by men. This year, four out of 24 films up for the Palme were directed by women.

The Grand Prix award was a joint honor split between Asghar Farhadi’s Iranian drama “A Hero” and Finnish director Juho Kuosmanen’s “Apartment No. 6.” 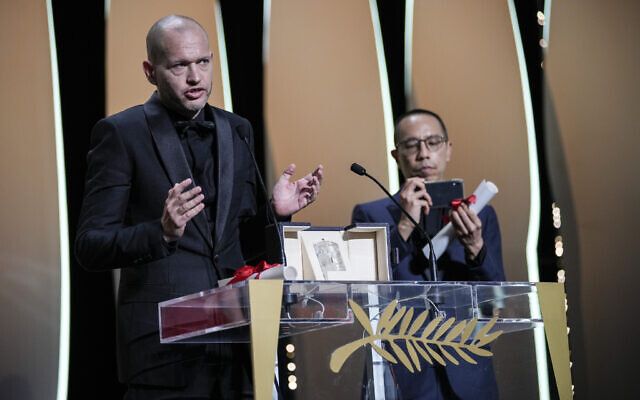 Best director was awarded to Leos Carax for “Annette,” the fantastical musical starring Adam Driver and Marion Cotillard that opened the festival. The award was accepted by the musical duo Sparks, Ron and Russell Mael, who wrote the script and music for the film.

The Croatian coming-of-age drama “Murina,” by Antoneta Alamat Kusijanović, took the Camera d’Or award, a non-jury prize, for best first feature. Kusijanović was absent from the ceremony after giving birth a day earlier.