Three Israeli filmmakers under arrest in Nigeria are set to spend a second Shabbat in jail.

They have not been charged by Nigerian authorities and are without legal representation, according to members of the Jewish community with knowledge of the situation.

According to media reports, Nigerian authorities from the Department of State Services arrested and interrogated the trio on July 9 on suspicion that they had come in contact with Biafran separatists.

That night, members of the Nigerian Jewish community called Rabbi Israel Uzan, the Chabad rabbi in Nigeria, who is in France for the summer.

Chabad, as well as expat Jews living in Nigeria, have been providing the three men with kosher food and religious items.

“We are here to assist them and assist the parents with connections, with food for the boys, with everything they need for Shabbat, with tefillin,” said Uzan.

One of the men entered Nigeria on a French passport, and the other two on American passports. This made it difficult for the Israeli embassy to get involved at the onset, according to sources with knowledge of the situation.

Making matters more complex, the US embassy reduced its operations Friday as a security precaution, without providing further details. The Muslim Eid al-Fitr holiday falls next week, meaning the embassy won’t be operating normally until July 26.

The families of the three Israelis said Wednesday that local political elements had “twisted” the gifting of a Torah scroll to a local community to claim it constitutes support for separatist political ambitions.

The Torah scroll is currently with the local community.

The Israelis were in Nigeria to film “We Were Never Lost,”  a documentary exploring Jewish communities in African countries such as Kenya, Madagascar, Uganda and Nigeria.

They took off from Ben Gurion Airport on July 5 and landed in Nigeria the next day.

https://wewereneverlost.raisegiving.com (Click Here)We are setting out to Africa soon to document the stories of the…

According to locals, the crew was detained at a synagogue during Thursday night services in the Igbo village of Ogidi by Nigeria’s secret police and taken to the capital Abuja. The Igbo consider themselves a lost tribe of Israel.

In their statement, the families explained that the filmmakers had brought gifts for the communities hosting them.

The group met last week with Igbo leader Eze Chukwuemeka Eri and presented him with a framed Shiviti made in Jerusalem.

Honored by Igbo King Eze Chukwuemeka Eri and invited to his palace. I presented him a gift from Israel, a shiviti…

Rochman also presented another Igbo community with a Torah scroll whose cover was designed by British-Israeli street artist Solomon Souza.

“The filmmaking crew thought it would be a nice gesture to bring several gifts with cultural symbolism to the communities it planned to visit,” the families said in their statement, adding that one of the gifts was the Torah scroll.

“Unfortunately, members of non-state political groups have hijacked for their own purposes images of the filmmakers gifting a Torah to a local community,” the families charged.

“These individuals are distorting the intentions of the filmmakers in an effort to manufacture a connection to local political matters when no such connection exists,” they said. “These politically motivated actors have taken a simple gesture of kindness and twisted it in an attempt to create an alternate meaning.”

A relative of one of the men told The Times of Israel on Tuesday that separatist social media accounts had taken advantage of the Israelis’ trip to claim that the three were supporting Biafran separatist groups.

“This documentary is not intended to make any political statements about the countries in which filming will take place, nor does the filmmaking team endorse any political movements. The filmmaking crew acts as a guest visiting the country and its various communities – there are no political overtones,” they said.

The filmmakers were aware of the political sensitivity surrounding the filming of the Igbo community. Last Thursday, the “We Were Never Lost” Facebook page stressed: “We do not take any position on political movements as we are not here as politicians nor as a part of any governmental delegations.”

One of the detainees, Benaym, was temporarily released from police custody Tuesday evening and handed over to the French Embassy in Abuja for unspecified medical reasons, an Israeli Foreign Ministry spokesman told The Times of Israel on Wednesday.

The families confirmed the details, stating that “as a sign of appeasement, the DSS allowed the French Embassy to host Edouard David Benaym on Tuesday night to receive some medical attention, with the intention of having him return to DSS custody the next day to continue the investigation.”

While a family friend of one of the detainees told The Times of Israel that former Israeli minister Ayoub Kara had flown to Nigeria to assist in the talks, the ministry spokesman said Kara happened to already be in Nigeria and was not involved in the diplomatic effort.

Kara did not respond to a request for comment.

Leader of the Indigenous People of Biafra (IPOB) movement, Nnamdi Kanu, wears a Jewish prayer shawl as he leaves his house in Umuahia, southeast Nigeria, to meet veterans of the Nigerian civil war, on May 26, 2017. (Marco Longari/AFP)

“We are working diligently with the US, Israeli and French embassies on the matter, and we greatly appreciate the attention they have given to the situation. Their involvement has helped to improve the conditions of the filmmakers while in custody – including the delivery of kosher meals prepared by the local Chabad,” the detainees’ families said.

“We hope that the DSS will quickly conclude what the facts support – that the filmmaking team has no political motives and that the team should be released from custody as soon as possible,” they concluded.

In January, a conflict broke out in southeastern Nigeria between Nigerian forces and the military wing of the Indigenous People of Biafra (IPOB) movement. The fight is ongoing.

A previous unilateral declaration of independence by the Igbo people in 1967 sparked a brutal 30-month civil war that left more than a million people dead. 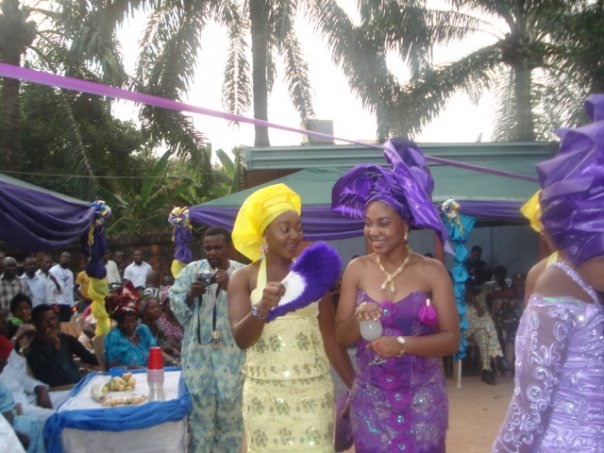 In 2018, fugitive pro-Biafran separatist leader Nnamdi Kanu gave a radio broadcast saying he was in Israel and indicating he owed his survival to the Jewish state.

Kanu, a former London real estate agent, heads IPOB and the outlawed pirate radio station Radio Biafra. He maintains the Igbo people, who are in the majority in southeast Nigeria, are a lost tribe of Israel and it is his mission to lead them to the promised land of Biafra.

Kanu is facing treason charges in his homeland. He was arrested by Interpol in the Czech Republic in June 2021.