Thousands of protesters in a number of European cities marched in support of Palestinians on Saturday as the worst violence in years raged between Israel and terrorists in the Gaza Strip.

Channel 12 news aired footage of protesters marching on a small Israeli flag placed on the ground in London as well as other Israeli flags being ripped up and thrown into the air.

According to Sky News, organizers said some 100,000 gathered outside the building.

Jeremy Corbyn, the former leader of the UK Labour Party who is an outspoken critic of Israel and presided over the party during a wave of antisemitism allegations, was expected to address the crowd.

The Palestinian Authority’s envoy to the UK Husam Zomlot told those gathered that “we are united. We have had enough of oppression.”

“Today we are saying enough, enough with the complicity. Thank you for standing with us,” Zomlot said.

Pro-Palestinian activists and supporters in London let off smoke flares, wave flags and carry placards during a demonstration against Israel amid fighting between the Jewish state and Palestinian terrorists in Gaza, on May 15, 2021. (Tolga Akmen/AFP)

In Berlin, firecrackers were hurled at an Israeli reporter for the Kan public broadcaster.

Antonia Yamin said she was attacked by demonstrators when they heard her report on the protest in Hebrew.

This just happened!
While covering the Palestinian demonstration in #Berlin in the background they yelled “Israel murderers children” and “Allahu Akbar” but they didn’t like me covering it in hebrew for @kann_news so they threw firecrackers
@RTLde team documented it pic.twitter.com/ZGKcVxVezy

In Paris, police officers used tear gas and water cannons to try and disperse a pro-Palestinian rally held despite a ban by authorities, who fear a flare-up of antisemitic violence.

Thousands of people converged in the Barbes neighborhood in the north of the capital, defying orders issued by loudspeakers that the march was illegal.

Officers blocked off wide boulevards as well as narrow streets where some of the protesters were forced to retreat, while knots of residents and passers-by watched or recorded the scene with their phones.

Some threw stones or tried to set up roadblocks with construction barriers, but for the most part, police pursued groups across the district while preventing any march toward the Place de la Bastille as planned. 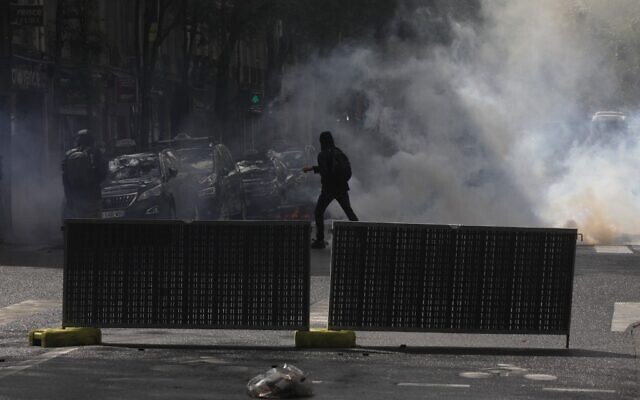 A protester runs away from tear gas during an anti-Israel demonstration in Paris on May 15, 2021 (GEOFFROY VAN DER HASSELT / AFP)

In Madrid, some 2,500 people, many of them young people wrapped in Palestinian flags, marched to the Puerta del Sol plaza in the city center.

“This is not a war, it’s genocide,” they chanted. 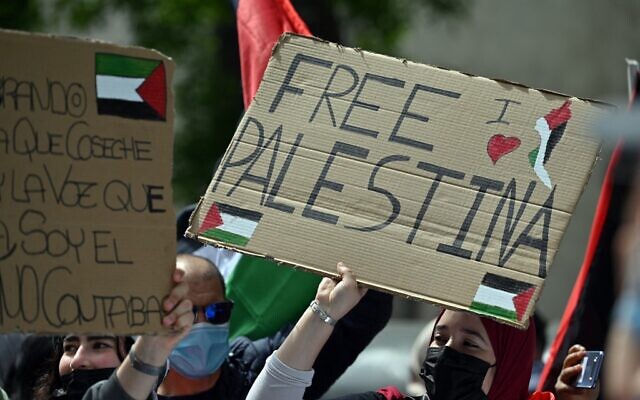 People take part in a pro-Palestinian demonstration in Madrid on May 15, 2021 (GABRIEL BOUYS / AFP)

“They are massacring us,” said Amira Sheikh-Ali, a 37-year-old of Palestinian origin.

“We’re in a situation when the Nakba is continuing in the middle of the 21st century,” she said, referring to the “catastrophe” word used by Palestinians to describe Israel’s creation in 1948.

“We want to ask Spain and the European authorities not to collaborate with Israel, because with their silence, they are collaborating,” said Ikhlass Abousousiane, a 25-year-old nurse of Moroccan origin.