The inventor of a new Israeli coronavirus medicine has secured the prime minister’s help to advance testing — and says the drug could provide hope to poor countries that don’t yet have access to vaccines.

Tel Aviv’s Ichilov Medical Center claimed a “huge breakthrough” on Friday, saying that Prof. Nadir Arber’s EXO-CD24 inhaled medicine had been administered to 30 patients whose conditions were moderate or worse, and all 30 recovered — 29 of them within three to five days.

On Monday, Prime Minister Benjamin Netanyahu invited Arber to his office and asked him about the “miracle drug.” During the briefing, Netanyahu said: “If this succeeds, it will be huge, simply huge. This is of global significance. This is amazing.

“I wish you success. If you need anything, say it and we will help you. This little thing could change the fate of humanity. This is amazing. Good luck.”

Arber told The Times of Israel on Tuesday that, with the Phase 1 trial just completed, he has applied to the Health Ministry to start a Phase 2 trial. This will give a more reliable picture of efficacy, as Phase 1 is small, largely concerned with checking safety, and lacking a placebo group.

Netanyahu has already helped to pave the way to a multi-country trial.  After meeting with Arber, he hosted Greek Prime Minister Kyriakos Mitsotakis, who offered to have a leading Greek hospital take part in testing in the framework of bilateral cooperation.

“I asked Professor Arber to come to my office today. He did. Two hours later my friend Prime Minister Mitsotakis comes to my office and more or less the first question he asked me was, ‘Can you tell me about this miracle drug?’” said Netanyahu.

“We called Professor Arber and Prime Minister Mitsotakis volunteered that Greece, their leading hospital, would partake in the clinical trials and I hope that we can approve this because I think this is an example of our cooperation in forging ahead to new areas.” 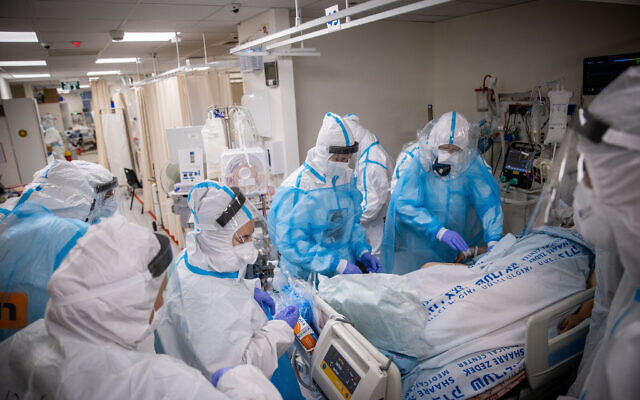 Arber said that Netanyahu also made it clear that he will help eliminate unnecessary bureaucratic delays. The doctor stressed that this will not come at the cost of scrupulous safely testing.

Encouraging news on EXO-CD24 comes as concerns are rising globally over the lack of access by poor countries to vaccines. Without weighing in on debates over vaccine distribution, Arber said he believes that his drug can provide significant hope to developing countries in Africa and elsewhere that don’t yet have access to vaccines.

“We can produce this drug effectively, efficiently, and cheaply, so this could be a partial solution for countries that can’t currently afford a vaccination,” he said. “This is our duty, to bring the message of hope to the entire world.”

The medicine fights the cytokine storm, a potentially lethal immune overreaction to the coronavirus infection that is believed to be responsible for many of the deaths associated with the disease.

It uses exosomes — tiny carrier sacs that shuttle materials between cells — to deliver a protein called CD24 to the lungs, and this protein is believed to help calm the immune system and curb the storm.

Times of Israel staff contributed to this report