An Israeli-led scientific expedition sailed on Tuesday from the southern city of Eilat toward Port Sudan, launching a joint project with Sudanese researchers that could help preserve the Red Sea’s unique coral reefs.

The collaboration, aided by Sudan’s normalization of ties with Israel last year, aims to create a first-ever comprehensive study of the entire Red Sea, possibly yielding precious information on the long-term viability of reefs.

While coral populations around the world are undergoing bleaching caused by climate change, reefs in the northern Red Sea, where the Gulf of Eilat lies, have stayed stable because of their unique heat resistance.

The mission is being headed by Maoz Fine of the Interuniversity Institute for Marine Sciences in Eilat, whose groundbreaking research offered insight into the durability of the northern Red Sea reefs.

He found that the northern Red Sea corals underwent a form of “thermal selection” in their journey from the Indian Ocean through warmer water thousands of years ago.

For years Fine had said that a comprehensive study at the Red Sea reefs was necessary to fully understand the variation from north to south.

But such a study faced diplomatic hurdles, with Arab states to the Red Sea’s south reluctant to work with Israel.

This combination of pictures created on October 23, 2020, shows an Israeli flag during a rally in the coastal city of Tel Aviv on September 19, 2020; and a Sudanese flag during a gathering east of the capital Khartoum on June 3, 2020. (Jack Guez and Ashraf Shazly/AFP)

‘Traveling back in time’

The six scientists and four crew members — all European, except Fine — is set to reach Port Sudan on the Swiss-flagged Fleur de Passion in four days, where a Sudanese team of researchers will join with a ship of their own.

The two vessels will spend five to six weeks collecting coral samples and testing their heat durability as the ship heads south.

Fine told AFP that moving from the healthier northern reefs to the struggling south was like “traveling back in time,” possibly offering new insights into the disparity between the two areas. 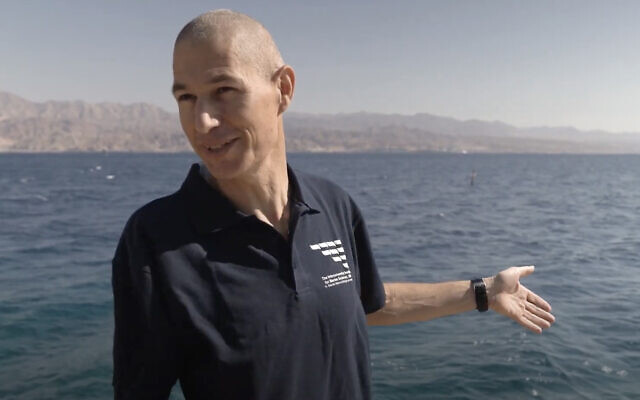 Meibom said the mission aimed to create “a real, holistic view of what the corals are, what state are they in, and where we can expect them to survive and for how long.”

Such a “baseline” would help scientists “understand where are the corals that have the biggest potential for survival in the future,” he told AFP.

The project, which formally began last month with a short excursion in Jordan’s Gulf of Aqaba, will continue over three years, aiming to further involve other Red Sea countries.