A month after the 1973 Yom Kippur War, the more than 200 Israeli soldiers taken prisoner by Egypt were released and sent home. Most of the Israeli prisoners of war were captured in some of the first days of the fighting, when the Israel Defense Forces was still scrambling in the wake of a surprise attack by Egypt and Syria, and they felt betrayed, angry and confused, according to transcripts from their release published by the Defense Ministry on Tuesday.

Roughly a week after their return to Israel, on November 27, 1973, the 231 IDF soldiers taken prisoner by Egypt met with Maj. Gen. Shmuel “Gorodish” Gonen, the head of the Southern Command during the war, and they wanted answers.

“How did the emperor suddenly lose his clothes, the best intelligence in the world? When will we get answers to these questions? Where’s our good intelligence?” a reservist soldier asked the general.

Gonen acknowledged the failure. In the ensuing months and years, the matter would be picked apart and analyzed, with the conclusion that critical evidence of an impending attack was available — that in some cases it wasn’t passed along and that in others it was not believed due to hubris.

“There was a failure in terms of intelligence, and a commission of inquiry has been formed to look into it. We didn’t know about the build-up of Egyptian tanks. About the Syrians, we did know,” Gonen said.

Gonen was widely reviled during and following the war, being replaced four days into the conflict by Haim Bar-Lev, a former IDF chief of staff who had since retired and served as a cabinet minister. In the aftermath, Gonen was blamed for many of the failures in the IDF’s initial responses to the Egyptian attack and was temporarily removed from the military, but was later reinstated.

The soldiers asked him pointed questions: Why they had no or little warning of an impending attack, why they didn’t get aerial and artillery support, and why they were left without orders. Gonen, who encouraged the men to ask such questions after giving them a brief rundown of the events of the war, had few answers.

The exchange took place in a military base in Zichron Yaakov, where the POWs were called after their release. Many of them later recalled harsh questionings — bordering on interrogations — at the facility. One former POW described it to The Times of Israel in 2012 as “another form of captivity,” saying it was “very, very uncomfortable.”

The transcript of Gonen’s tense meeting with the Israeli POWs was released on Tuesday ahead of the 48th anniversary of the Yom Kippur War. The names of the soldiers were never written in the document, which only identified them by where they served.

“We were the eyes of the country. Three weeks before the war we saw irregular activity. Two weeks before, we saw many [Egyptian] soldiers… We saw commando soldiers coming, measuring, watching, taking notes, etc. From morning to night they used tractors to build positions for tanks and artillery batteries. A week and a half before the war, you came to visit. My question is: What did you know about these things? I said to our intelligence officer that there is going to be a war, but they didn’t believe us,” one soldier said. 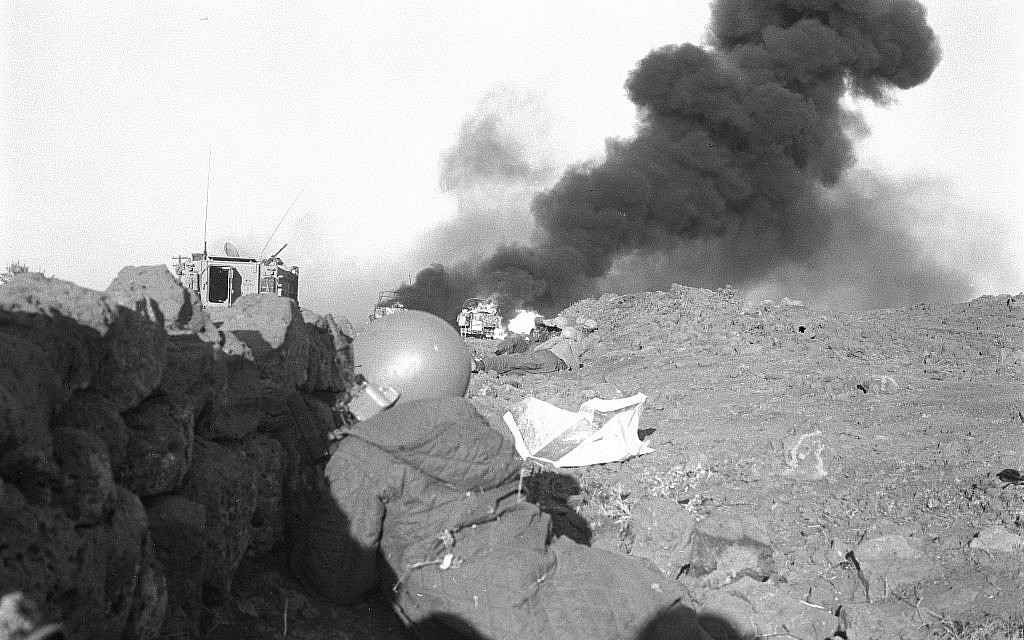 An Israeli soldier takes cover in the Sinai Peninsula during the Yom Kippur War, on October 6, 1973. (Uzi Keren/Defense Ministry Archive)

“I think it’s worse than that. Those reports weren’t blocked… The IDF believed it was an exercise. They said it was a full exercise and not an attack. Maybe if we had called up the reserves, the war wouldn’t have broken out… They decided to attack when there weren’t reserves,” Gonen said.

One soldier from the Mezach, or pier, the last Israeli stronghold along the Suez Canal, wanted to know why the decision to surrender or go on fighting was left up to them, rather than coming from headquarters.

“On the 13th [of October] the surrender was organized for 11 in the morning. They left the final decision up to the fort — to surrender or to keep fighting. It was clear, to keep fighting was suicide. Why didn’t we get an order?” he asked.

“I don’t have an answer as to why the order was halted,” Gonen said. “There was a decision to surrender. The fort was surrounded and laid with mines. But still we wanted to perform a rescue with inflatable boats. Our radars saw the [Egyptian] forces, we directed artillery fire but couldn’t reach Mezach… But you can’t tell a young company commander to surrender. On the other hand, some say you just can’t surrender. I don’t hold that view,” Gonen said.

Other soldiers wanted to know why they didn’t receive the artillery or air support they requested, which could have prevented their capture. “We asked for artillery fire on our position. We went down to our bunkers, but no fire came,” one said.

One soldier, from the 600th Armored Brigade, complained of being overrun after they broke through Egyptian lines, without even infantry support to help them.

“We waited for air support or artillery. If infantry had been with us, we could have gotten through it. [The Egyptians] screwed us with ambushes after we broke through,” he said.

While the general appeared to speak straightforwardly and honestly with the POWs about the military’s and the country’s failures, he also tried to convince them to not give in to emerging public feelings of despair.

“There’s a gloomy atmosphere in the country. Don’t become part of it. The war isn’t over. The Arabs’ plans for us haven’t changed… The diplomatic situation is very grave. They received missiles, ammunition, missiles that never miss. We have a good army, but a poor one,” he said.

“There’s a lot we have to fix. But we must be gentle because it’s our souls on the line. I’m glad I spoke with you,” Gonen said.