An Israeli security guard stationed outside a Jewish home has been filmed beating up an Arab resident of the Palestinian-majority East Jerusalem neighborhood of Silwan.

A video, published last Thursday by Palestinian media, is said to depict a security guard employed through the Construction and Housing Ministry restraining and punching a man — who reportedly has an unspecified disability — several times in the head and face.

The man was identified as Fadi Salah Mheisen by the Wadi Hilweh Information Center. In photos published after the attack, Mheisen is seen with injuries around his eyes and face.

The security guard was employed as part of a Housing Ministry policy that provides funding for private security companies to guard Jewish residences in East Jerusalem.

The Association for Civil Rights in Israel has contested the policy as “discriminatory and illegal,” though the High Court upheld the ministry’s practice in 2014.

A view of Silwan from the Meyuhas house in the City of David. (Shmuel Bar-Am)

Mheisen’s brother, Shadi, described the attack to the Walla news site: “He was praying today at the Al-Aqsa Mosque, went back down to his house and was caught by security guards there. They asked him ‘where are you going?’ And he said he was going home. They sprayed him with gas, he fell to the floor and they started beating him.”

“He just wanted to get home. He did nothing.” Mheisen said. “The police have not come here yet.”

According to Peace Now, Mheisen has special needs. He was taken to a health center after the attack, Mheisen’s brother told Walla.

The Housing Ministry identified the security guard as belonging to the Shahaf private security company, which “carries out security operations in East Jerusalem under the professional guidance of the Israel Police,” according to Walla.

After receiving the footage, “ministry officials demanded that the company conduct an in-depth investigation and present their findings to the ministry and Israel Police,” the ministry added. 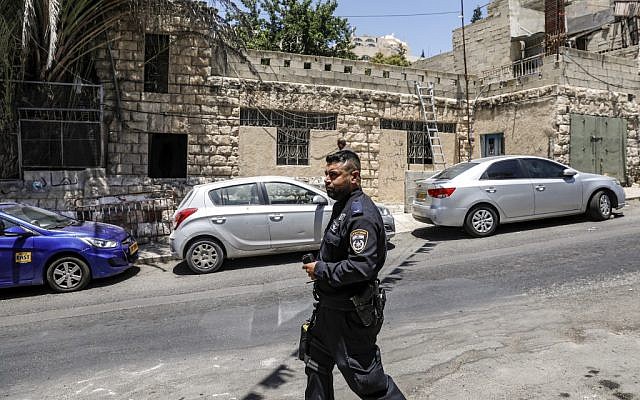 An Israeli policeman walks outside the former house of the Palestinian Siyam family during their eviction in the East Jerusalem neighborhood of Silwan on July 10, 2019. (Ahmad Gharabli/AFP)

According to Walla, the police have opened an investigation.

Israel captured East Jerusalem in the 1967 Six Day War and later annexed it in a move never recognized by the international community. It sees the entire city as its capital, while the Palestinians view the eastern sector as the capital of their future state.