Binyamina, a town near Haifa in the north, was officially labeled a “red” location on Wednesday, according to the Health Ministry’s COVID guidelines.

The town had 122 active COVID cases as of Thursday morning, according to the Health Ministry, with a 3 percent overall positive rate among those tested, compared to 0.3% for the country as a whole. Binyamina is currently the only red location in the country, and the first to be designated as such in several months. Modiin, which had 71 active cases as of Thursday morning, was labeled “yellow.” Every other municipality in the country is considered “green.”

Under Israel’s “traffic light” plan, first published in August, each municipality is given a score between 0 and 10 based on several factors, including the number of new cases per 10,000 residents, the rate of positive tests in each town, and the rate of increase in the number of new patients in each town. Cities and towns that receive an average score of 7.5 or higher will be defined as “red”; the current score in Binyamina is listed as 8.

Overall, 138 new COVID cases were confirmed in Israel on Wednesday, marking three straight days of more than 100 new cases daily. Prime Minister Naftali Bennett said Wednesday that if there are more than 100 daily new cases on average for a period of a week, Israel’s indoor mask mandate — which was lifted on June 15 — will return. Dr. Sharon Alroy-Preis, the Health Ministry’s public health director, said Thursday that she believes the mandate will be reinstated by Sunday.

Earlier this week, 44 children at one school in Binyamina tested positive for COVID, and the outbreak has since spread across the city. As of Thursday morning, 1,107 people in the city — which has a population of about 15,000 — were in quarantine due to exposure to a positive COVID patient. The indoor mask mandates for Binyamina and Modiin — which had its own school-linked outbreak this week — were reinstated on Sunday.

On Wednesday, the Health Ministry announced that masks were once again mandatory in all hospitals and health clinics as well as at the airport. The ministry also said that it can order even vaccinated or recovered Israelis — who are generally exempt from quarantine — into home quarantine if they are known to have been in contact with a patient infected with the Delta variant or if they traveled on a plane with a positive COVID patient.

Shai Berlin behind a newly re-erected Perspex screen in his hardware store in Binyamina on June 21, 2021. (Nathan Jeffay/Times of Israel)

Dr. Alon Rappaport, the medical director of Pfizer Israel, told Ynet on Thursday that the Pfizer-BioNTech COVID vaccine is effective against the Delta variant.

Bennett and Interior Minister Ayelet Shaked agreed on Thursday to reopen the epidemiological tracking system in order to identify people whom a positive COVID patient may have come in contact with.

As of Thursday morning, there were 680 active COVID cases in the country; on Sunday there were just 290 active cases. 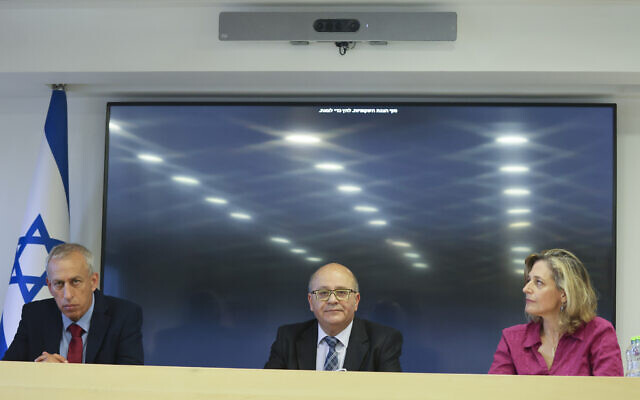 Concerns in Israel are rising over the ultra-contagious Delta variant of COVID, which is believed to make up some 70% of new cases in the country. Visiting Ben-Gurion Airport on Tuesday, Bennett urged Israelis to reconsider traveling abroad, in particular with unvaccinated children, over COVID fears.

The prime minister, who said the government is working “to cut off” the Delta variant “early and decisively,” also called for all 12- to 15-year-olds in Israel to get vaccinated as soon as possible, and noted that Israel’s stockpile of vaccines will be expiring in the coming months, and therefore teenagers should make appointments soon. He warned the teenagers to get their first shots before July 9.

Health Ministry figures show that demands for the COVID vaccine has spiked this week, with more than double the number of first doses administered so far this week compared to the same period last week.

On Wednesday, the government announced that the date to allow vaccinated tourists to enter Israel was being pushed off from July 1 for at least a month over concerns of new contagious variants.