The journey of an Olympic athlete is a grueling, bruising and all-consuming superhuman feat. And yet, Israeli swimmer Andi Murez has managed to combine training for the Tokyo Games with medical school.

“Sometimes I think it’s crazy,” laughed Murez during a recent phone interview with The Times of Israel on her last day in Israel before departing for a pre-Olympics training camp in the Philippines. “But I think it is definitely nice when you have something that you’re super passionate about, but also have something else to have balance in your life.”

She admitted that combining the intensity of medical school and Olympic training is not “very much balanced as it is super intense. But I think having two things is nice because when you’re having a bad day in one you have the other to focus on.”

At 29, Murez — a veteran of the 2016 Games in Rio — is the oldest of Israel’s 15-member swim team at the Tokyo Games. This year, the record-breaking Los Angeles native, who became an Israeli citizen in 2014, qualified to compete for Israel in the 50m freestyle, the 100m freestyle and the 200m freestyle.

The Tokyo Games will serve as a redemption of sorts for Murez, who after falling ill during the 2016 Olympics was forced to withdraw from some events and didn’t perform at her best in others.

“I got sick a week before the Games, when we were already in the Olympic Village in Rio,” recalled Murez. “So I didn’t swim that well, so I can only do better.”

And while the overachieving athlete has kept plenty busy with medical school, she views the COVID-delayed Olympics as a blessing in disguise.

After completing two years of medical studies at Tel Aviv University’s Sackler School of Medicine following the Rio Games, “I was planning to take one year off and train for the Olympics,” said Murez. “And I got injured at the beginning of that year.”

When news broke that the 2020 Games were being postponed, “it was a relief, because then I could relax and take care of my health and not have to train, and build back up from there.”

Murez spent the early days of the pandemic in Los Angeles with her family, then returned to Israel last summer for two months to complete her psychiatry rotation — which she said helped take her mind off the stress of the delayed Games.

“I think it was super helpful, just because the delay of a year is a long time, and when you’re so focused, to then have all this time and not know what to do — it was good,” said Murez. She noted that she cut back her training to just once a day while studying. “It gave me something else to think about, so I wasn’t too focused on the Olympics.” 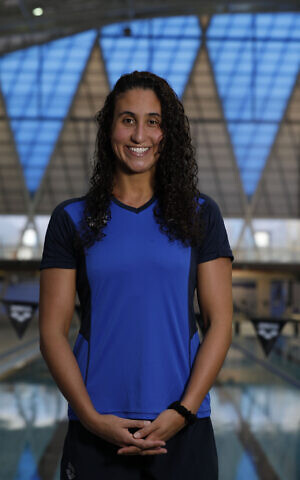 Once her rotation was completed, Murez threw herself back into training, first at the Wingate Institute in Netanya and then back in San Diego with swimming coach David Marsh, the professional adviser to the Israel Swimming Association.

The COVID year “just gave me more time — I had taken off two years for school, and so having that extra year to train actually was super beneficial for me,” Murez said. “So I feel like I’m in the best shape of my life and super excited to go and see what I can do in Tokyo.”

Murez has already proven her strength in the water this year, shattering Israeli records in multiple events. In May she set a new Israeli record for the 100m freestyle while competing in Budapest, and in June she broke the 200m freestyle record at the Israeli Summer Championships.

“Andi Murez is definitely the fastest [female] swimmer in Israel ever, the times prove it,” Luka Gabrilo, the head coach of Israel’s Olympic swimming team, told the Kan public broadcaster last month. “In the 50m, 100m, 200m — she’s the queen of the distance.”

And he believes Murez will be in top form in Tokyo.

“I strongly believe that she didn’t peak yet,” Gabrilo told Kan. “We can expect her [to be] better than what she’s shown so far.”

Seven Israeli athletes at the upcoming Tokyo Olympic games, including Andi Murez (right), model the T-shirts and shorts that are part of their official uniforms. (Amit Schussel/IOC)

Murez hails from generations of swimming Zionists: Her grandfather, Joe Murez, swam competitively for a Jewish club in Vienna in the 1930s, before fleeing to the United States, and was “a big Israel supporter,” Murez said.

Her father, Jim Murez, also swam competitively, and in 2009, both Andi and her brother, Zak, competed at the Maccabiah Games in Israel, where she picked up five gold medals and five silvers.

“It was my first time in Israel. My grandfather came to watch and both my parents came as well,” said Murez. She said that the non-Israeli competitors experience a “mini Birthright the week before the games start, where we tour Israel and learn about the history.”

Following those games, Murez returned to the US to study biology at Stanford University. After graduating in 2013, she returned to Israel for that year’s Maccabiah Games, and began to think about swimming for Israel.

“I started talking to some of the Israeli swimmers,” she said, “and everyone was super friendly and welcoming. And it seemed like it would just be a really good opportunity to continue swimming.”

After the 2016 Olympics in Rio, Murez enrolled in medical school in Tel Aviv, and once this year’s Games wrap up, she’ll have only a few weeks’ break before her studies begin once again.

After she completes two more years of clinical rotations in Israel, Murez is unsure if she will continue her medical career in Israel or the US.

“I want to leave my options open, because I’m not really sure what I want to do,” she said. She noted that the Sackler program is “geared towards getting a residency in the US” and said she is eager to “pick up experience in some different places. But then after that — I have no idea.” 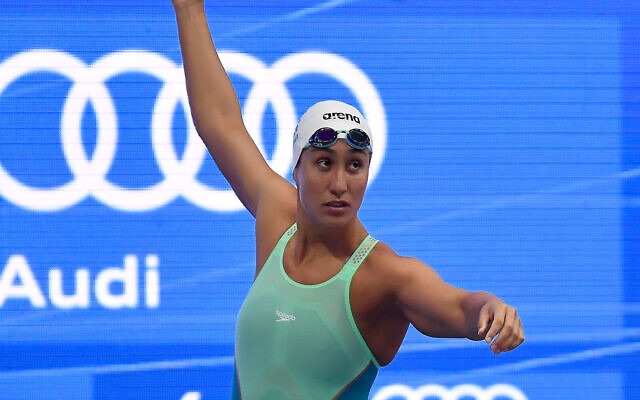 For now, medicine is on the back burner as Murez gears up to hit the water in Tokyo and aims to perform her personal best. Her first event is slated for July 26, when she competes in the first heats of the women’s 200m freestyle.

“It feels more and more real,” Murez told The Times of Israel just over two weeks ahead of the opening ceremony. “I was more focused on the training and what I could do to prepare, and so now, it’s sort of becoming a lot more real.”

And while she’s hoping to top her disappointing 2016 performance, the Tokyo Games are somewhat bittersweet, as COVID restrictions mean her family can’t be there cheering her on.

“It changes the whole experience,” she said. “I went to Rio and I remember all of the crowds and the media.” This time around, even the athletes themselves are forbidden from watching other events.

But Murez said the restrictions can also help focus all of her attention on her own competitions. “This way we are more focused just on swimming — you go to the pools, go back to your room, that’s it. There are definitely advantages and disadvantages, overall… but in terms of the Olympics, it’ll definitely be a different experience.”

Five years after Rio, Murez feels more than ready to represent Israel once again and give it her all.

“I’ve had a lot of amazing opportunities to learn in the last five years, so I feel a lot more prepared, and I’m super excited,” she said. “If I can inspire other women, and other kids to have big dreams, then that makes me really happy.”