Israel’s mixed team in judo lost 4-3 to France in the quarter-finals at the Tokyo Olympics on Saturday, with the team now hoping for a bronze in the repechage round.

After Israel initially took a strong lead 3-1, France fought back to level out the scores 3-3 before winning the final bout in the event that is being competed for the first time at the games.

Wins for Gili Sharir and Li Kochman took the result to 3:1, before losses for Raz Hershko and Or Sasson left it at 3:3 ahead of Sharir’s second decisive fight, which she lost to Margaux Pinot.

In the previous elimination round of 16, Israel defeated Italy 4-3 — Sharir won two bouts, while Hershko and Peter Paltchik also won.

Sharir’s victory over individual bronze medalist Maria Centracchio was a tie-breaker in the competition.

Margaux Pinot of France, left, and Gili Sharir of Israel compete during their elimination round match in team judo competition at the 2020 Summer Olympics, July 31, 2021, in Tokyo, Japan. (AP Photo/Vincent Thian)

On Thursday, unnamed officials in Israel’s delegation to the Tokyo Olympics voiced strong criticism of the country’s judo team.

With most judo events over, no Israeli has even reached the semifinals in this year’s competition.

“This is a huge failure. Conclusions must be drawn as to how this collapse happened at the Olympics,” an unnamed delegation official is quoted as saying by Ynet. “There is something systematic here, it isn’t a one-time failure, and all the judokas lost to inferior rivals.”

Earlier in the week the Israeli Olympic Committee said in a statement that “summaries and conclusions will only be drawn at the end of the games when we return to Israel.”

At the 2016 Rio Olympics, Israel won two bronzes in judo, bringing the country’s total of Olympic medals to nine (now ten) — four in judo, with the sport considered a source of national pride. 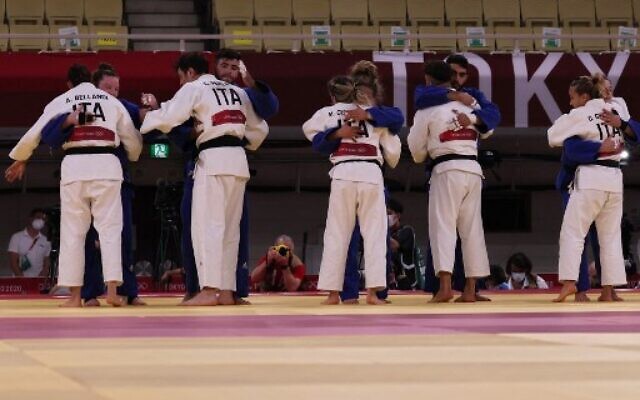 Members of team Israel (blue) comforts members of team Italia following their victory in their judo mixed team’s elimination round bout during the Tokyo 2020 Olympic Games at the Nippon Budokan in Tokyo on July 31, 2021. (Jack GUEZ / AFP)

Avishag Semberg’s taekwondo bronze in the women’s -49kg category last Saturday remains Israel’s only medal so far in the 2021 games.

Earlier Saturday, Israeli archer Itay Shanny’s surprise Olympic run ended when he lost in the last eight in the men’s individual competition after a dramatic shoot off was needed to separate him from eventual victor Tang Chih-chun.

Shanny, 22, and his Taiwanese opponent were tied at five sets each and the final result coming down to a single arrow, with the one closest to the center advancing to the quarter-finals.

Shanny, who is the Jewish state’s first-ever archer to reach the Olympics, surprised with his run, knocking out two higher-ranked archers. Shanny had placed 60th out of 64 competitors in the initial ranking round.