Artem Dolgopyat, Israel’s first gold winner of the Tokyo Olympics, and only its second gold medal winner ever, must be one of the most modest individuals ever to step onto the top level of the Olympic podium.

When the last of his rivals had completed his routine in the artistic gymnastics floor exercise on Sunday, and it became clear that he had won the gold, Dolgopyat wrapped himself in an Israeli flag and raised a fist in celebration, but he did so gently, almost embarrassedly. This was no “I’m the best in the world” swaggering fist-pump.

There was no victory scream, no dance of celebration, at the achievement of a lifetime — a victory he has worked toward since he started gymnastics at age 6, prompted by his gymnast father. He is now indisputably the best in the world, but there is plainly no arrogance to him whatsoever.

Interviewed a few minutes later, after he had been awarded his medal, the Israeli national flag had been raised and the “Hatikvah” national anthem had blared out, Dolgopyat, 24, maintained the extraordinary humility. “I didn’t do the best routine,” he acknowledged disarmingly. “I did the routine much better in the qualifying round. I was really worried that it wouldn’t be good enough for a medal. But everyone [in the competition] was nervous, and everyone made mistakes. And it was enough, and I’m very happy.”

Asked what had been going through his mind as the competition unfolded, he was charming again: “I didn’t watch the competitors before me. When I saw my score wasn’t that high, I was very stressed. But I didn’t want anyone to fall or anything like that.”

The superlatives and the praise flooded in from those around him. Israel’s Channel 5 sports interviewer asked, quite reasonably, if he realized he’d just become “an instant national hero.” President Isaac Herzog, phoning in from Jerusalem, told him: “Artem, you made history. Do you realize you’re the number 1 in the world? We’re very emotional. I congratulate you from the bottom of my heart on behalf of all Israelis.” Prime Minister Naftali Bennett, on the phone soon after, informed him, “We stopped the cabinet meeting in the middle because you made this wonderful news.”

Dolgopyat, still quietly dazed, managed smiles and polite thank yous. A Ukraine-born immigrant to Israel at age 12, he also stressed, in his gentle tones, that he was so proud to be representing Israel.

The candid, grounded mindset plainly extends to his coach, Sergei Vaisburg, who, beaming down the camera from Tokyo, said “We were prepared for a medal, but of course we didn’t expect the gold. That is a dream. And it’s the summit of life.”

“Have you absorbed [that you won the gold] yet?” Dolgopyat was asked at the official press conference a little later. True to form, he paused, and then issued a rueful “no” to much laughter.

Here, plainly, is an athlete who is most comfortable, most fulfilled, when actually engaged in his sport itself. And as of Sunday, to the delight of Israelis, and his gradual realization, he’s the very best in the world at it. 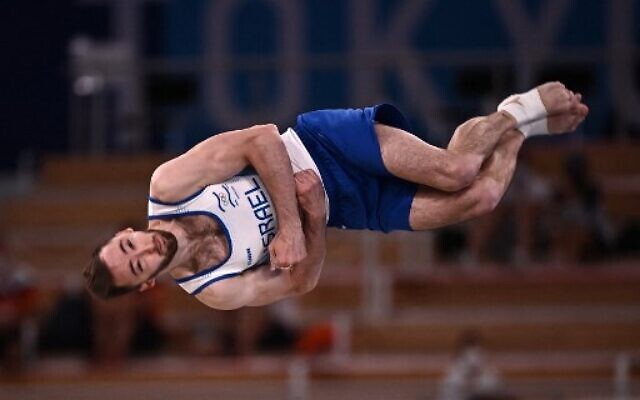