Less than 24 hours after clinching a historic gold medal for Israel, gymnast Artem Dolgopyat has a new goal: the Paris 2024 Summer Olympics.

“We’re not going to stop, we’re going to move forward with our focus on Paris and get ready for that and bring honor to the country,” Dolgopyat told a video press conference for Israeli reporters on Monday. “We need to start thinking of a new routine and check all the new rules and we’ll start working and see what scores we get.”

“We’ll take a week, or a month, and then we’ll start working again,” he said. “We have a plan to continue to the next Olympics — the whole gymnastics team as well as Artem.”

The modest, unassuming 24-year-old athlete still appeared to be adjusting to the reality of winning a gold medal for Israel, having turned instantly into an Israeli celebrity as calls rolled in from the prime minister and the president and congratulations poured in from almost everyone in Israel — even Gal Gadot.

But Dolgopyat said he’s not looking for fame, endorsement deals or even more Instagram followers.

“I don’t know what it will be like when I go back to Israel — until now I definitely wasn’t well known or recognized,” he said. “I want to continue to be modest the way I am, and not think about the things around me and just do my work.”

Gold medalist Israel’s Artem Dolgopyat celebrates on the podium of the floor event of the artistic gymnastics men’s floor exercise final during the Tokyo 2020 Olympic Games at the Ariake Gymnastics Centre in Tokyo on August 1, 2021. (Jeff PACHOUD / AFP)

The gymnast said when he returns to Israel he wants to focus on the sport, not on the celebrity.

“I don’t really want all that other stuff. I think it will only put more pressure on me,” he said. “I think bringing honor to the country and getting medals… is much more important than everything else.”

Dolgopyat said he felt emotional thinking back to his lifelong journey toward this moment, and all the people who supported him along the way.

“I first walked into a gymnastics hall at age six, and I saw bigger kids doing flips and somersaults and I immediately fell in love with the sport,” he said. “My parents always set goals for me… already at age six they saw that I was talented and from the very first day they believed in me and told me that I would make it to the Olympics.”

But he said he didn’t necessarily believe in it himself.

“When I think about it now I want to cry,” he said. “I didn’t totally believe it would happen… but all the people around me supported me, and I’m so happy that I’m surrounded by them and they always pushed me further and believed in me.” 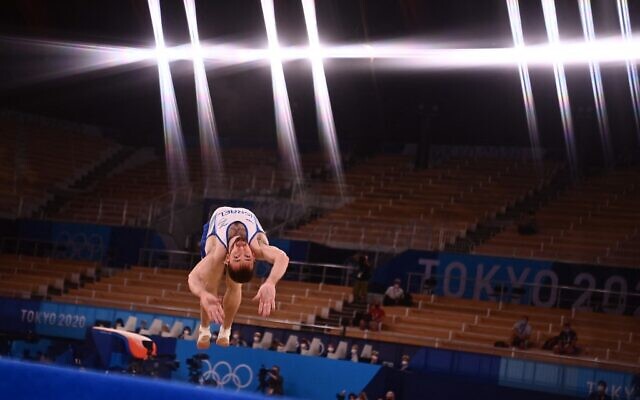 Israel’s Artem Dolgopyat competes in the floor event of the artistic gymnastics men’s floor exercise final during the Tokyo 2020 Olympic Games at the Ariake Gymnastics Centre in Tokyo on August 1, 2021. (Loic VENANCE / AFP)

One of those people was fellow gymnast Alexander Shatilov, who has represented Israel at four consecutive Olympic Games, including in Tokyo, but never succeeded in bringing home a medal. Shatilov, 34, served as a mentor to Dolgopyat over the years.

Dolgopyat told Shatilov he was “a little bummed” that they did not both make it to the final rounds of the artistic gymnastics, but “it was a fun month to work with you together, side by side, and I’m happy that we were both here.” 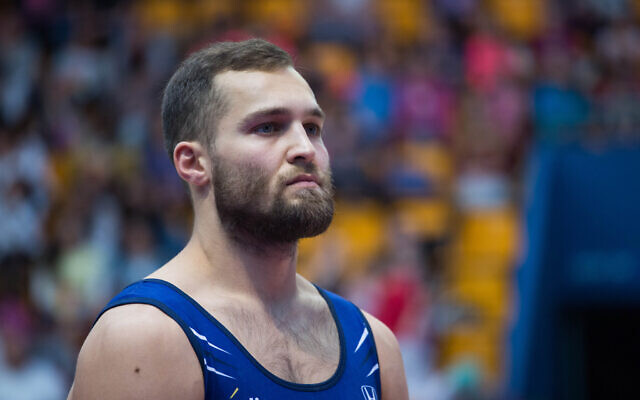 And with the 2020 Games behind him, Dolgopyat is already planning his future moves.

“I hope that I can continue this way and succeed and win even more achievements, multiple medals,” he said, noting that he has plenty of room to improve on the other apparatus events, including pommel horse, vault, still rings and horizontal bars. 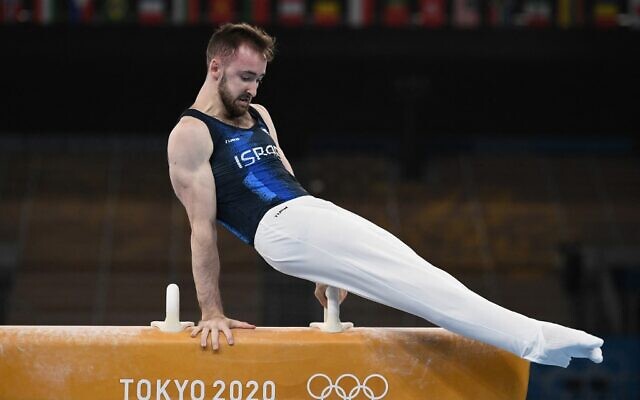 Israel’s Artem Dolgopyat competes in the pommel horse event of the artistic gymnastics men’s qualification during the Tokyo 2020 Olympic Games at the Ariake Gymnastics Centre in Tokyo on July 24, 2021. (Lionel BONAVENTURE / AFP)

And in line with his quiet, modest approach, Dolgopyat declined to address his personal life, after his mother revealed on Sunday that he is unable to wed his girlfriend of three years in Israel due to his religious status.

Dolgopyat, who was born in Ukraine and moved to Israel at age 12 with his family, is Jewish on his father’s side but not his mother’s side, which grants him a status of “no religion” in Israel and prevents him from marrying in the country — along with hundreds of thousands of other Israelis.

“It’s my personal life and I think it’s not so appropriate to talk about in front of the whole country,” he told reporters on Monday when asked. “These are things that are in my heart and my own personal issues so I’d rather not answer that.”

He also chose not to weigh in on the NIS 500,000 grant he will receive from the Israel Olympic Committee for his gold medal win. He will receive another NIS 180,000 from his sponsor, Bank Hapoalim, and NIS 60,000 from Maccabi Israel.

“My dream was to get the medal, not how much money I’ll make,” he said. “Everything else is just a bonus.”