Government secrecy over its dealings with Pfizer is to blame for the uncertainty regarding continued vaccine supplies, a leading doctor and adviser on the country’s virus policy said Thursday. Prof. Nadav Davidovitch told The Times of Israel he is also worried the government’s culture of caginess is hampering preparedness for the anticipated vaccination of children.

Pfizer announced on Monday it had completed all vaccine deliveries to Israel under its initial deal, and The Times of Israel has learned that it has prepared an as-yet-unsigned new agreement for more doses.

Pfizer was the first major vaccine company to complete a teen trial for its shots, and securing more doses is key to Israel’s plan to soon start vaccinating 12- to 15-year-olds, Health Ministry Director-General Chezy Levy said on Thursday.

But political infighting, and squabbling between government ministries, has delayed the allocation of budgets and signing of the new agreement. “Unfortunately, the agreements are not closed because no budget has been approved to purchase new vaccines,” said Levy, stating that more shots are needed both for kids and for adults’ boosters.

An Israeli student receives a COVID-19 vaccine injection, at a vaccination center in Tel Aviv, on January 23, 2021. Currently, vaccines are mostly limited to over-16s, but this is expected to change soon. (Avshalom Sassoni/Flash90)

Davidovitch, a leading epidemiologist and a member of the coronavirus czar’s advisory committee, said he is “concerned” by the situation, and argued that it wouldn’t be such a struggle to secure the necessary approvals if the government were not so secretive about vaccine talks. The secrecy makes it hard for politicians to back agreements, he said.

“In terms of the contract, price and how many doses [are being discussed], this is almost top-secret and I’m not even sure head of public health Sharon Alroy-Preis knows all the details,” said Davidovitch, chair of Israel’s public health physicians’ union. “Probably only [Health Ministry Director-General] Chezy Levy, the health minister and the prime minister know.”

Under pressure to detail what data it is sharing with Pfizer, Israel published a redacted version of its initial agreement with the company in January. The Finance Ministry since said that it paid some NIS 2.6 billion ($785 million) for initial deliveries, which are believed to consist of 10 million doses. But many details of the arrangement are still unclear, and no information has been released about discussions for a new deal.

Davidovitch claimed that the lack of transparency makes it harder than it should be for politicians and officials to speedily give the necessary approval to sign new agreements. “The delay now is mainly because of the political situation and because there were not really open discussions about strategy and data,” he said.

The country needs an “urgent discussion” to take place among politicians — beyond the small group of people currently privy to information — to discuss procurement and plan the next stages of the vaccination drive.

But the culture is one of secrecy, which is also preventing effective preparation for child vaccination by the healthcare community, Davidovitch suggested. “There is a kind of disconnect regarding what will be in the near future,” he said, noting the lack of roundtables with doctors. “They need to engage with pediatricians and the public health community, but a formal discussion is not happening now.”

The Health Ministry closely guards details. Reached for comment by The Times of Israel on its dealings with Pfizer, including an unsubstantiated claim cited by some media that Israel has failed to pay the company for some doses, the ministry replied: “Due to confidentiality of information, the Health Ministry cannot elaborate on these issues.” 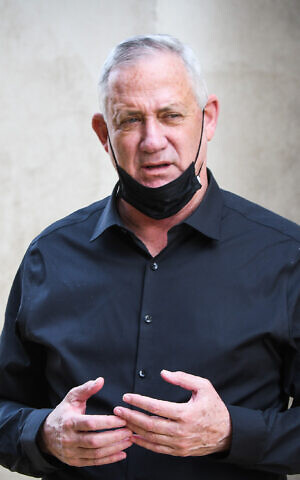 Gantz, who heads the Blue and White party, said he canceled the meeting due to Prime Minister Benjamin Netanyahu’s refusal to allow the appointment of a justice minister. Israel has been without a justice minister since last week, which hampers the Knesset’s ability to pass legislation, among other consequences.

During the canceled cabinet meeting, ministers were set to vote on an NIS 7 billion ($2.1 billion) spending package on coronavirus vaccines.

The Health Ministry expressed concern over the stalled approval for an agreement with Pfizer for more vaccines too, saying it was frustrated by the holdup.

Times of Israel staff contributed to this report