A study by the Hebrew University of Jerusalem published on Tuesday has predicted that the tally of serious COVID-19 cases in Israel could reach as high as 400 in less than three weeks if no steps are taken to rein in infections.

In the study, which has been presented to the government, researchers warned the number of serious cases — currently at 145 — could rise to 200-400 by mid-August.

More than 2,000 Israelis tested positive for COVID-19 on Monday, a high not seen since mid-March. The number of serious cases has more than doubled over the past week.

The Hebrew University study warned that numbers of serious cases and patients on ventilators have been rising at a similar rate to that observed in July 2020.

“The wave of infections last July was stopped thanks to restrictions imposed in the second half of July,” the researchers wrote. “No such steps were taken this year, therefore no similar stop is expected in the near future.”

The study also suggested that the effectiveness of the vaccine in preventing serious illness has dropped to 80 percent (compared to over 90% before the appearance of the ultra-infectious Delta variant of the coronavirus).

It indicated the shots are 90% effective in preventing deaths.

In this March 2021 photo provided by Pfizer, vials of the Pfizer-BioNTech COVID-19 vaccine are prepared for packaging at the company’s facility in Puurs, Belgium. (Pfizer via AP)

Recent data released by the Health Ministry shows that those who were first to receive their two doses of the Pfizer COVID vaccine are more likely now to be infected, as the vaccine appears to lose protection potency over time.

“We looked at tens of thousands of people tested in the month of June, alongside data on how long had passed since their second shot, and found that those vaccinated early were more likely to test positive,” Dr. Yotam Shenhar, who headed the research, told The Times of Israel last week.

Data released by the Health Ministry last week suggested that people vaccinated in January have just 16% protection against infection now, while in those vaccinated in April, the effectiveness was at 75%.

Doctors note that figures may not only reflect time that has passed since vaccination, but also a bias according to which those who vaccinated early were often people with health conditions and who are more prone to infection, such as the elderly.

Some analysts have warned that the figures on vaccine effectiveness are prone to major inaccuracies because of a range of factors, including questions over whether there is accurate data on infection levels among the non-vaccinated, which is vital for such stats. And British data indicates the Israeli studies may be overstating the case. 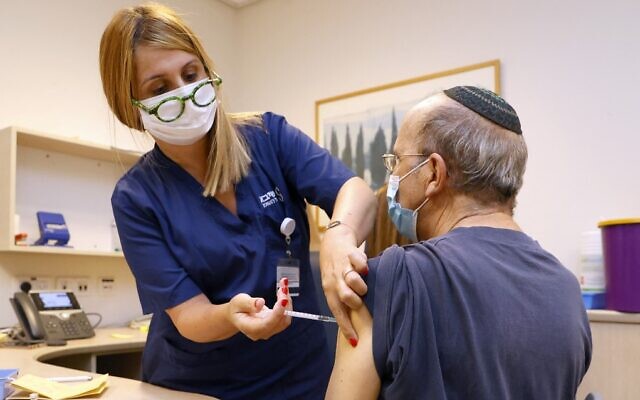 A man receives a third dose of the Pfizer-BioNTech coronavirus vaccine at Sheba Medical Center, on July 12, 2021. (Jack Guez/AFP)

During a visit to a retirement home in Jerusalem on Tuesday, Prime Minister Naftali Bennett said Israel could soon approve a third COVID booster shot.

“We’re on top of it, believe me,” said Bennett. “For at least a month [we’ve been working on] things that need to come to fruition. We’re very close. The less we talk about it, the greater chance it’ll happen. I’m on it.”

The prime minister did not specify which populations would receive the booster, but recent media reports have indicated government discussions have focused on administering it to the elderly.

Israel began administering a third booster shot two weeks ago to those with severely compromised immune systems, including transplant recipients and those with blood cancers — setting a world precedent.

Nathan Jeffay and AP contributed to this report.