Hours after winning the Eurovision contest Saturday night for Italy, the frontman of the funk-rock band Maneskin was called on to deny having taken cocaine during the live broadcast of the show, after footage that went viral on social media appeared to show him snorting a line.

The largely topless, high-kicking, lederhosen-wearing Italians beat off stiff competition from France and Switzerland with their song “Zitti e Buoni.”

“Rock and roll never dies,” singer Damiano David shouted as he picked up the microphone-shaped glass Eurovision trophy after a nailbiting finish saw the public vote send Maneskin soaring into the lead with 524 points.

But after showering his bandmates with champagne at a press conference following the win, David was asked about his so-called rock and roll behavior in the contestant’s arena during the live show, where he was filmed in what many people on social media said looked like the act of drug-taking.

“I don’t use drugs. Please, guys. Don’t say that really, no cocaine,” he told reporters.

Maneskin, featuring three men and one woman, preferred to focus on the music, saying that the whole evening of stomping songs and flamboyant costumes brought cheer after more than a year of COVID-19.

Bassist Victoria De Angelis said their victory “could be a message of hope” to Italy, which was one of the countries in Europe hit hardest by the virus.

“We’re honored to be bringing it back after 31 years,” she said of the Eurovision title, which means Italy is due to host next year. 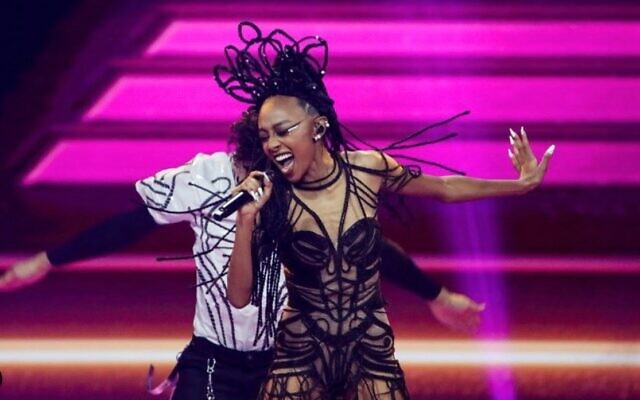 Alene finished her set by shouting her thank yous in Hebrew, Arabic and English.

“Toda raba, shukran, thank you very much,” she yelled, before exiting the stage.