On an April day in 2012, Reuvena Dayan drove her husband to the Baptist Village complex in Petah Tikva. She didn’t tell him why, but he correctly guessed her intent: to show him that the facility includes a baseball field — a rarity in Israel.

“It was the biggest surprise I could give a Japanese guy who works in baseball,” Dayan recalled recently.

Dayan’s husband, Kazumasa Kibe, had worked for more than 30 years in his hometown of Fukuoka, Japan, as a baseball coach and physical education teacher. Yet as recently as a decade ago, Israel, where he now lives, was still considered a baseball backwater.

Fast forward to today and the 64-year-old retiree known as “Kaz” is back visiting Japan — as a coach for Team Israel. The Jewish state is one of only six national baseball teams competing at the Tokyo Olympics, which will formally open on July 23. Israel’s first game is on July 29 in Yokohama versus South Korea, at 1:00 p.m. Jerusalem time.

Fellow coaches, players and administrators credit Kaz with helping Israel at the Olympics-qualifying tournaments in Europe in 2019, as well as the country’s earlier international breakthrough at the 2017 World Baseball Classic, where Team Israel finished sixth. He’s also credited with helping Israel achieve successes in overseas youth tournaments over the years.

Although he is not an Israeli citizen, Kaz has been a ubiquitous presence in the Israel Association of Baseball for far longer, conveying the game’s finer points to many IAB youth and adult players almost from the moment of that 2012 spousal surprise. And he does it all as a volunteer, with abundant patience and smiles.

The Israeli national team celebrating a victory over France. (Israel Association of Baseball)

He also has a legendary work ethic. At Tel Aviv’s Sportek in September 2019, this reporter observed the already-uniformed Kaz arrive by bicycle, dismount, run several laps around the empty baseball field to warm up on an already stiflingly-hot morning, then arrange orange cones on the grass for drills for players who wouldn’t arrive for about another hour. Those players — nearly all of whom were Jewish veterans of the major and minor leagues in the United States who’d come to Israel for a goodwill visit en route to the European qualifiers — included many who are now representing the country in Tokyo.

Prognosticating the team’s Olympics chances isn’t something Kaz wanted to do, but he likes where it stands.

“This group is united, cohesive — and these are qualities not to be taken for granted,” Kaz explained in Japanese, with Dayan translating into Hebrew, during a recent interview over coffee at the Holon Theater for the Performing Arts near the couple’s home. “There’s no ego here, and no one is spoiled. They defer to each other all the time.”

This group is united, cohesive — and these are qualities not to be taken for granted

Mathematics and Team Israel’s strong roster make the case for the contingent taking a medal in Tokyo. (Former American League All-Star second baseman Ian Kinsler joined up in 2020 as one of the team’s many new immigrants — citizenship likely being just a formality for most, since none have expressed the intent to live in Israel permanently.) Team Israel is on the sports map just by getting to Tokyo — becoming just the fourth team to represent Israel in any sport at the Olympics, and the first since 1976.

A self-described introvert, Kaz has found his comfort zone in Israel. His satisfaction comes from simplicity, taking care of the couple’s 9-year-old son Yotam as a stay-at-home dad in Holon; jogging and walking in forests and the nearby Mikve Israel Agricultural School; and socializing every so often with couples who, like he and Dayan, include a Japanese spouse. Kaz’s passion for running includes competing in the Jerusalem Marathon, his favorite event because he enjoys absorbing the Old City’s history from an unconventional perspective. 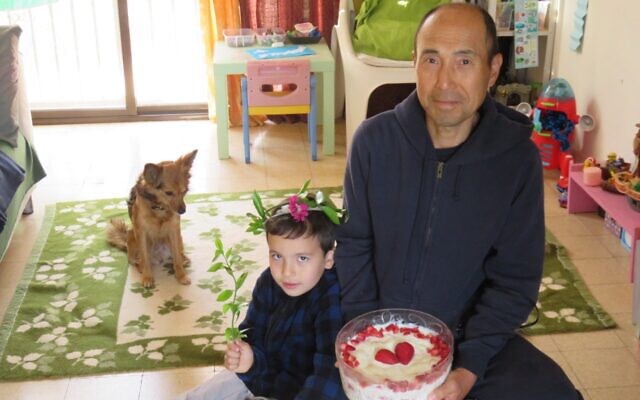 Even while wearing his new country’s colors as he returns to his homeland for the world’s greatest sports event, Kaz deflects the personal significance, preferring that attention go to the players. “I’m just happy for the team,” he said.

Besides, he added, the Tokyo Games lost much of their luster because of the pandemic-driven restrictions that prevent spectators, including competitors’ families, from attending events. As it is, those rules may keep Kaz, whose official capacity with the team is listed as TAP, or technical assistant personnel, from watching Team Israel from the field or even the grandstand.

Still, he’ll have an important role to play at these Olympics.

At workouts in Yokohama, Kaz will do what he does best: self-hit (in baseball vernacular: fungoes) fly balls to outfielders and grounders to infielders, pitch batting practice “until his arm falls off,” and project positive energy that reverberates throughout the players and staff, said Team Israel’s head coach, Eric Holtz.

“He’s a big part of what we do on a daily basis,” Holtz said. “He’s the most wonderful human being I’ve ever met… He’ll outwork guys half his age.”

He’ll outwork guys half his age

Infielder Mitch Glasser cited Kaz’s offering tips to his charges on their fielding fundamentals and, during games, signaling his players to shift defensively for particular batters — orders that Glasser said invariably prove prescient.

Kaz somehow connects effectively with his charges through gestures, body language and tone of voice. He knows very little English or Hebrew.

“I know the baseball-related words to use,” he explained in Japanese. “And, like when you sing songs softly to children, I speak softly to players.”