The Lod District Court ruled on Monday that the controversial 2002 documentary “Jenin, Jenin” could not be screened in Israel and that all copies should be seized, and ordered the payment of damages to an army reservist officer who was defamed in the film.

Lt. Col. (res.) Nissim Magnagi filed his suit against the filmmaker, Mohammad Bakri, in November 2016, demanding NIS 2.6 million (approximately $820,000) in damages and an end to the screening of the documentary.

“At the end of the day, and looking closely, we are dealing with a defendant who found it appropriate to produce a film that purports to be a documentary, based on a group of interviews with those who are presumed to be residents of the Jenin refugee camp,” wrote Judge Halit Silash in her ruling. “The evidence in this case shows that [Bakri] consciously chose not to conduct an examination, even minimal, even preliminary, of the allegations and facts expressed in the same interviews.”

Culture and Sports Minister Chili Tropper of the Blue and White party praised “the court’s support for the IDF fighters and the values ​​of honesty and truth,” the Kan public broadcaster reported.

“Freedom of expression does not allow for false accusations and libel,” Tropper said.

New Hope leader Gideon Sa’ar said he “welcomes the decision of the Lod District Court to ban the screening of the film ‘Jenin Jenin,’ which slandered the IDF and its fighters.”

However, the chairman of the Balad faction in the Joint List party, MK Mtanes Shehadeh, said that “it’s not the film that should be shelved, but the occupation and its crimes.”

MK Aida Touma-Sliman, also from the predominantly Arab Joint List, said the ruling was “occupation under the auspices of the court.”

It was the second defamation suit to be brought against Bakri for the film, which falsely alleged the Israel Defense Forces massacred civilians in the West Bank city of Jenin during the Operation Defensive Shield military campaign at the height of the Second Intifada.

During the 11-day battle in the city, 52 Palestinians were killed by Israeli forces but the majority of them — 27, according to Human Rights Watch; 48, according to the IDF — were combatants. Twenty-three Israeli soldiers were killed in the fighting. 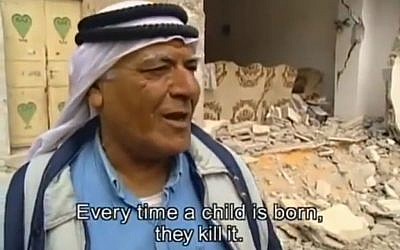 The 2002 film ‘Jenin, Jenin’ claimed Israeli soldiers committed a massacre in the West Bank town during Operation Defense Shield in April 2002, a charge refuted by Israel and by international human rights organizations. (Screenshot)

Rumors of a massacre had spread following a decision by the military to effectively cut off all outside ties to Jenin during the fighting, which was what prompted Bakri to enter the city with a film crew to interview residents.

Shortly after its 2002 release, five IDF reservists sued Bakri for defamation, arguing that they had been depicted as war criminals in the film.

After a prolonged legal battle, the Supreme Court dismissed the reservists’ case in 2011. The judges determined that although the documentary was “indeed full of things that were not true” and did slander the IDF, the plaintiffs were not specifically identified in the film and therefore did not have standing to claim that they were personally defamed.

In this case, however, Magnagi did appear in the documentary and, as a result, had a legal basis for a defamation suit.

In the relevant portion of the documentary, an older Palestinian man describes how troops threatened his life. The film then cuts to footage of three IDF soldiers walking next to a jeep — including Magnagi, according to the suit — as the elderly man says, “[The soldier] told me: ‘Either you shut up or I’ll kill you.’” 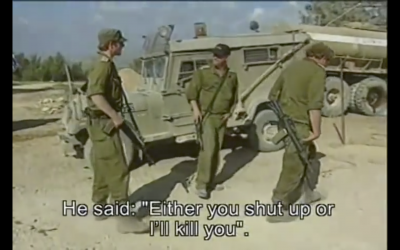 Lt. Col. (res.) Nissim Magnagi and two other Israeli soldier can be seen walking next to a jeep in the 2002 film ‘Jenin, Jenin,’ which falsely claimed Israeli soldiers committed a massacre in the West Bank city during Operation Defense Shield in April 2002. (Screen capture)

Magnagi argued in his suit against Bakri that his “good name has been harmed, his honor has been smashed and his identity as a moral and ethical soldier has been damaged.”

In his suit, Magnagi noted that he would donate most of the money to veterans of the 2002 operation in Jenin and the families of slain soldiers.

Immediately after its release, the 53-minute film drew sharp criticism for what many — including the Supreme Court — saw as egregious breaches of documentary and journalistic ethics. 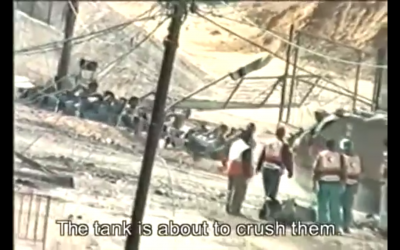 A still image from the 2002 film ‘Jenin, Jenin,’ which falsely claimed Israeli soldiers committed a massacre in the West Bank city during Operation Defense Shield in April 2002. (YouTube)

Notably, Bakri was found to have used misleading cuts in the film to imply deliberate civilian deaths that never happened, specifically in a scene in which an armored personnel carrier — inaccurately referred to as a tank in the movie — is made to look as though it ran over a number of Palestinian prisoners lying on the ground, though it did not, as the director later admitted in court.

The filmmaker also mistranslated Arabic for the subtitles to include words like “genocide” and “massacre,” which were never actually said during interviews. In addition, no Israeli officials were interviewed for the movie to provide an opposing viewpoint.

Over the years, Barki’s lawyer for the initial Supreme Court case, Avigdor Feldman, has maintained that his client was not trying to present a factual account of the “Battle of Jenin,” but was only showing the Palestinian narrative, regardless of its veracity. In media interviews, the attorney said this could be seen in the fact that the documentary has no voiceover and is only made up of interviews.