Jerusalem Mayor Moshe Lion warned local Arab officials in the city that unvaccinated residents may not be permitted to go to mosque, schools or hotels, in audio recordings released on Monday.

The meeting between the mayor and the heads of a number of neighborhoods in the city was held amid concerns about low vaccination rates in East Jerusalem.

The legality of preventing unvaccinated individuals from attending gatherings or going to work is still under debate as the country struggles to add incentives to its world-leading vaccination program, which has been losing momentum.

Lion said that residents of the city were “indifferent” to the vaccination program and needed to be called and told to go and get inoculated.

“They will be under pressure soon when everyone goes back to work and then they tell him: ‘Hello, stop, you did not get vaccinated, stay home now,’” Lion said.

“Remember what I tell you, friends — whoever does not get vaccinated will not be able to return to normal routine,” Lion said.

According to the report, the unnamed Arab officials on the call agreed with Lion. 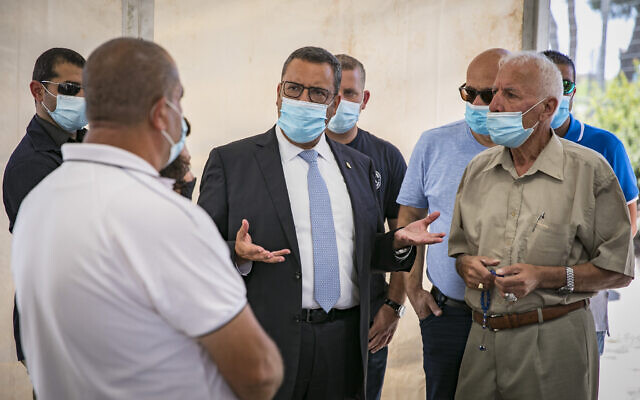 Jerusalem Mayor Moshe Lion seen at the opening of a drive-through site to collect samples for coronavirus testing, at the entrance to the East Jerusalem village of Jabel Mukaber August 18, 2020 (Olivier Fitoussi/Flash90)

Health officials are said to be deeply concerned about the upcoming festival of Ramadan, a time for large gatherings, combined with low vaccination rates and with the highly contagious British strain of the virus running rampant.

According to data published by Kan news, East Jerusalem is one of the Arab localities with the lowest vaccination rates in the country, with only 13 percent of all residents receiving their first inoculation. By comparison, the first shot vaccination rate is 20% in Rahat, 26% in Taibeh, 30% in Umm al-Fahm, 32% in Nazareth, 41% in Shfaram and 43% in Tamra. 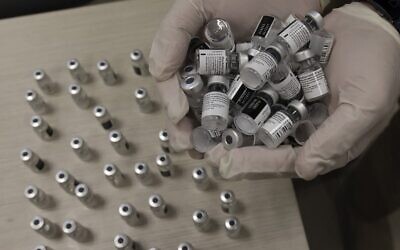 A health worker holds empty vials of the Pfizer-BioNtech COVID-19 vaccine at a clinic in East Jerusalem on February 3, 2021. (AHMAD GHARABLI / AFP)

The recordings were released hours after the mayor of the central Israeli city of Yavne announced that all teaching staff would be required to be vaccinated if they are to continue teaching in the city’s educational institutions.

“To ensure safety for the children of the city, educational institutions will be out of bounds for teaching staff who refuse vaccination,” Zvi Gov-Ari said.

Gov-Ari added, “Teaching staff who are not vaccinated are endangering themselves and their students.”

Meanwhile, Hay Galis, CEO of BIG Shopping Centers, said all employees in the strip mall chain must be vaccinated, with both doses, or they will be denied entry to the company’s offices.

With Israel’s world-leading vaccination drive slowing because of a collapse in demand, the Health Ministry and some private firms are looking at ways to incentivize Israelis to go and get their shots. 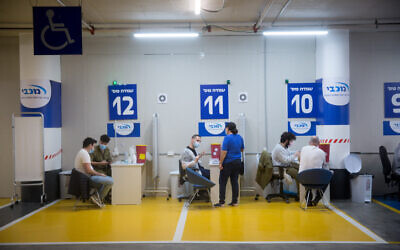 Israelis recieve a COVID-19 vaccine at a Maccabi Health vaccination center at the Givatayim mall, outside of Tel Aviv, February 4, 2021. (Miriam Alster/Flash90)

Israel has been aiming to dole out 200,000 shots a day, but although everyone 16 and over is now eligible for the vaccine, demand is running at barely half that total.

On Thursday, Energy Minister Yuval Steinitz proposed advancing legislation that would obligate the public to be inoculated or face punitive measures, according to a television report. Shocked by the suggestion, other ministers did not back Steinitz.

The Health Ministry said Monday evening that 3,516,242 Israelis had received their first vaccine shot, and 2,130,652 have also gotten the second dose.